Home / California / Getting a good scratch important for happy cows
A new user experience is coming! We'll be asking you to login to your Morning Ag Clips account March 1st to access these new features.
We can't wait to share them with you! Read more here. 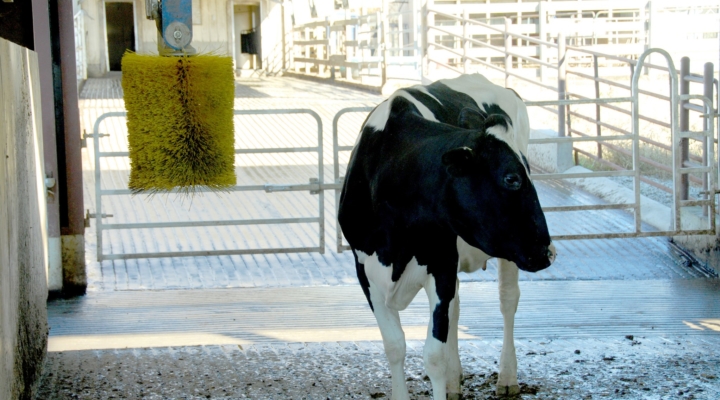 A scratching brush looks similar to a small bristled roller in a car wash. When the animal steps into or under the brush, it automatically begins rolling. (U.S. Department of Agriculture, Flickr/Creative Commons)

VANCOUVER — Everyone knows the satisfaction of having an itch scratched and researchers at the University of British Columbia say cows appear to feel the same way.

A study from the animal welfare program at the school found dairy cows want to use a scratching brush just as much as they want to access fresh feed.

The program’s Prof. Marina von Keyserlingk, one of six co-authors of the report, said in nature, cows are outside and use trees and other abrasive surfaces to scratch themselves. But when they’re kept in a barn, scratching is almost impossible.

A scratching brush looks similar to a small bristled roller in a car wash. When the animal steps into or under the brush, it automatically begins rolling.

While researchers found that the cows liked using the brush for an average of seven minutes a day, they weren’t sure how important it was to get that scratch.

“For me, what I also think about is if she’s super itchy and she can’t alleviate that itch, it could be that she could be really frustrated,” she said. “We don’t know what a frustrated cow necessarily looks like, because we haven’t really looked in this context, but it could actually improve her emotional state.”

Published in the journal Biology Letters on Wednesday, the study says in some countries, including Denmark, providing cows with access to resources that promote coat care is mandatory.

“Cattle with access to mechanical brushes are clean and spend about fivefold more time grooming compared with when brushes are not available, suggesting that these brushes are important to the cow,” the study says.

She said they aren’t sure why the cows like to groom themselves. It could be to get rid of dirt or, just like most mammals, they get itchy once in a while.

In the past, science has tended to focus on animal welfare by looking at all animals, but von Keyserlingk said that this study looks deeper.

“We know that not all animals are identical and so I’m really interested in this individual variation. Because it’s the individual animal that has the ability to suffer. So looking at these types of things, we can get a better insight into individual differences.”

She couldn’t say that if a farmer added the brushes to their barn, they might have an increase in milk production, but the cattle could be more comfortable.

“I think that there’s a growing body of evidence now that having these brushes is good for the cows,” von Keyserlingk said.