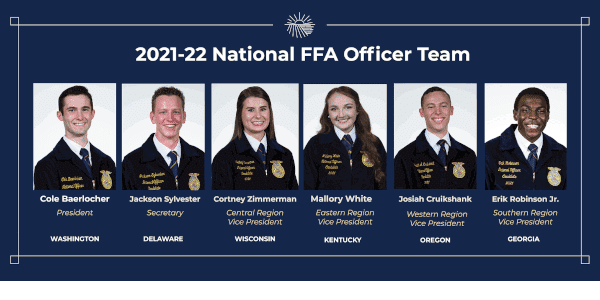 INDIANAPOLIS — Learn about the 2021-2022 National FFA Officer Team from the following officer profiles.

“I don’t remember what she said but I remember how she made me feel, like I could go out there and conquer the world,” Baerlocher says. “That’s a feeling I’ll never forget. I wanted to be a national officer in that moment and have the opportunity to change members like just like Sarah did for me.”

Baerlocher says his biggest goal for his upcoming year of service is to make sure every member he encounters feels seen and valued and understands everyone has a place in FFA.

One year from now, Baerlocher wants to be able to say he’s given all he had to the members who gave him the opportunity to serve.

“I want to be able to look back and say, ‘I went through this year with a heart of kindness and humility, and I uplifted the people around me,’” Baerlocher says.

In Jackson Sylvester’s eyes, he’s experienced just about everything FFA has to offer. “It all began when I zipped up my jacket in the sixth grade and immediately dove in,” he says.

It wasn’t until Sylvester attended his first National FFA Convention & Expo – nearly a year later as a seventh grader – that the idea of running for national office first crossed his mind.

“At the time, it was just a dream,” he says. “When I later became a state officer, I realized what it was like to guide, impact and serve as a role model for members.”

From that point on, Sylvester knew he wanted to make this dream a reality, and says he kept his eyes on the prize ever since. Sylvester says the people he’s surrounded himself with helped him achieve this goal.

“These individuals have proven to me that I can break down barriers I always thought were set in front of me,” he says.

One of Sylvester’s main focuses for the upcoming year is to help members from all walks of life recognize their full potential.

“I firmly believe people want to feel valued and appreciated,” he says. “I want members to feel as if they own the square foot of ground they stand on.”

Growing up, Cortney Zimmerman witnessed her family’s involvement in FFA and knew she wanted to be a part of the organization.

“My FFA journey started well before I was an actual FFA member. My dad was my FFA advisor and my mom is the state executive director,” Zimmerman says. “It felt natural for me to get involved in FFA.”

Zimmerman fell in love with every aspect of FFA, including the conferences, conventions and leadership development events (LDEs). Her passion for FFA stems from her belief that every member is unique in their own way, offering their own experiences and perspectives.

“We’re all so different. Within this organization, not only are there agriculture students, but there are also so many first generation FFA members diving right in,” she says. “I think everyone is so incredibly amazing in their own way. I believe all these members are the future of the organization.”

During her year of service, Zimmerman wants to encourage students to find the uniqueness inside themselves.

“My number one goal is for members to know their value, and I want to show them that through one-on-one conversations, taking pictures or sending ‘thank you’ cards, whatever it may be to let them know they truly matter in this organization,” she says.

Mallory White comes from a long line of FFA members.

“FFA is something of a family tradition,” she says. “My dad, all of his brothers and my cousins were all in FFA. I grew up hearing their stories and experiences, and that led to me joining the organization. My passion for agriculture comes from my production agriculture background, but FFA truly developed and fulfilled that passion of agriculture for me.”

During her upcoming year of service as the eastern region vice president, she hopes to lead by example with genuineness and humility and show members they are valued.

“Titles aren’t what makes a person,” White says. “I’m here to spread that message. You don’t have to have a title to be somebody, to make an impact and to be worthy of love and praise from other people.”

Her immense community support system and deep passion for agriculture has propelled her through the long and challenging national officer selection process and now she is ready to give back.

“I’m excited to spread the good word about American agriculture not only to our members, but to sponsors, supporters, alumni and all of our local communities because the future of agriculture is here and we get to be a part of it,” White says.

Josiah Cruikshank’s FFA journey began before he was even born. At the 1994 Oregon State FFA Convention, Cruikshank’s father, then the retiring state president, introduced the incoming officer team. Little did he know, Cruikshank’s future mother was the newly elected state reporter.

“As he was hugging [the officers] and saying congratulations, he accidentally said, ‘I love you,’ to my mom and that’s how they met,” recalls Cruikshank. “Shortly after, they got married. When I was old enough, they encouraged me try out FFA.”

In the years to come, Cruikshank would later follow in his father’s footsteps and became the Oregon FFA president.

Cruikshank says his family remains his strongest support system. “I’m thankful for the people who have invested in my life and brought me to the place I am today.”

As he prepares for his year of service, Cruikshank plans to continue developing his own leadership capabilities, while giving back to members staff and others within the organization.

“I loved leadership and I loved engaging with members, helping build them up and bringing out their potential,” Robinson says.

Within the next year, Robinson says he wants to spread positivity to everyone he meets. “I want members to always remember that joy and kindness are things that we should all try to give in every situation. The best way to feel that unconditional joy and unconditional kindness is being in this blue jacket and in this organization.”

Robinson is thankful for every single person who has been involved in his journey. He is looking forward to interacting with minority students to encourage involvement in FFA and show them how the organization helped him grow, and how FFA can do the same for them.

“This organization is for everybody, and I’m looking forward to all the growth we will experience in the year to come,” he says.