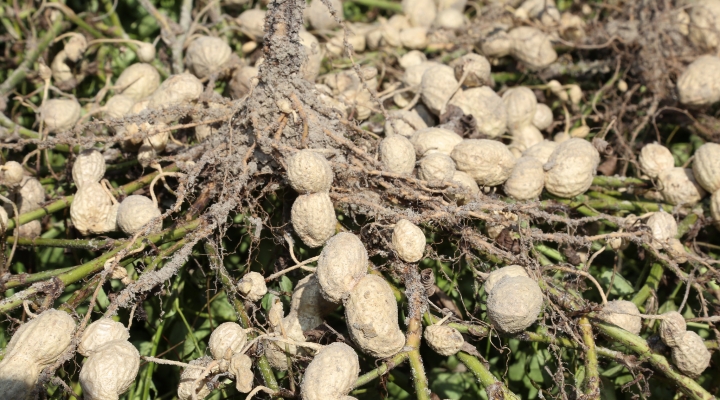 There was an air of excitement as farmers and vendors interacted at the 45th Annual Georgia Peanut Show held Jan. 19 & 20 at the UGA Tifton Campus Conference Center. The show organized by the Georgia Peanut Commission, returned from a one-year hiatus due to the COVID-19 pandemic last year. (photo by UGA CAES/Extension, creative commons/flickr.com)

MACON, Ga. — There was an air of excitement as farmers and vendors interacted at the 45th Annual Georgia Peanut Show held Jan. 19 & 20 at the UGA Tifton Campus Conference Center. The show organized by the Georgia Peanut Commission, returned from a one-year hiatus due to the COVID-19 pandemic last year.

More than 100 exhibitors displayed their products and services used to grow Georgia Peanuts. Georgia Farm Bureau was proud to participate as a vendor as it has for many years.

Kelley Manufacturing Co. (KMC) provided the use of a new peanut combine (choice of a 4 or 6-row) for a year to one lucky door prize winner attending the Georgia Peanut Show. Congratulations to Jamie Jackson of Collins for winning the grand door prize drawing! Jackson will have the option to purchase the combine after the ’22 season from an authorized KMC dealer with $15,000 off the list price.

Members of the University of Georgia Extension Peanut Team and peanut breeders from Southeastern land grant universities and the USDA gave updates on production issues and new peanut varieties during sessions offered Jan. 19 and 20.

“The 2021 crop was one of the largest yields for Georgia in the past 10 to 15 years,” Montford said. “Last year’s crop set us up where we’re going to have some [supply stock] overages, which might drive down contract prices for this year’s crop.”

He added that the large average yield per acre is because non-irrigated acres fared well last year due to more rain and cooler temperatures. While the eastern and central part of Georgia’s peanut belt benefited from last year’s weather, Montford acknowledged that many peanut growers in Southwest Georgia experienced lower yields due to excess rain and cooler temperatures.

“Southwest Georgia received more rain from July through October,” Montford said. “East and Central Georgia fared better because it had some dry spells throughout the growing season. Statewide we had cool weather in April and cooler than normal temperatures for much of May. Temperatures were close to average in June followed by one of the coolest Julys that we’ve had in a long time. A hot August was followed by below average temps in September then a warm October. The temp units didn’t drive this crop as they usually do. That’s one reason this crop didn’t fill out like it usually does.”

While the mild weather South Georgia has experienced so far this winter has kept heat costs down, row crop growers may pay for it come summer.

Kemerait said farmers will probably see a cost increase for the fungicides they need to combat disease and nematodes and may experience shortages of generic products azoxystrobin, pyraclostrobin and tebucaonazole. Premium fungicides will most likely be readily available unless peanut acreage goes way above 2021.

To grow peanuts in ’22 with fungicide products in tight supply, Kemerait  advises growers to use the Peanut RX website at www.peanutrx.org to evaluate the level of threat from diseases and make appropriate changes to reduce their risk. Growers can also use results of the Peanut Rx website to tailor their fungicide programs for specific fields. Growers should make contingency plans for using alternate products if a particular product is not available when needed.

While farmers are looking at higher fertilizer prices than they’ve seen in more than a decade, UGA Extension Agronomist Glen Harris put the situation in perspective.

“Be sure to take soil samples of your fields to determine what your soil needs,” Harris advises.

Harris recommends that farmers follow the four Rs approach to properly fertilize their fields: use the right source; apply at the right rate; apply nutrients at the right stage of growth and apply in the right place (to areas in field where needed).

“Even now with fertilizer prices being higher, for corn and cotton crops, you need to fertilize your fields based on the yields you want. It will still pay because commodity prices are good,” Harris said. “If commodity prices go down, that will be a different story.”

On Jan. 20, the Georgia Peanut Commission (GPC) honored growers, businesses and numerous individuals who have made a positive impact on Georgia’s peanut sector during their careers as educators, researchers, innovators, reporters and policy makers.

These farmers received a sign to display at their farm and gift cards from Agri Supply and the GPC, which offers this award to honor farmers who have the passion, diligence, leadership and desire to see the peanut crop in the state of Georgia continue to be the highest quality.

Shane farms in Appling County with his dad, Randy, and brother, Brandon. They farm 2,100 acres growing peanuts, cotton, corn, soybeans, wheat, cabbage and watermelons. Shane strives to utilize innovative stewardship practices on the farm to reduce his carbon footprint and water usage. He is also active with a number of community and agriculture organizations within his county and across Georgia.

The GPC Research and Education Award went to Dr. David Lee, retired vice president for research and executive vice president of the University of Georgia and a second award went to the University of Georgia for its support of peanut research. Recipients of the GPC Media Award were Ron Smith, retired editor of Southwest Farm Press, and The Ocilla Star. The GPC Innovator Award went to Lewis M. Carter Jr., owner and former president of LMC. GPC Special Awards were presented to Gerald Long, retired Georgia Farm Bureau president, and Dedria Smith, director of the Georgia Department of Agriculture Tifton Seed Lab.

Each were nominated to represent their districts during nomination meetings held Dec. 20 and 21. Kendrick replaces Armond Morris as the GPC 2nd District director after Morris decided not to seek renomination after serving on the commission a total of 41 years.

Other GPC Directors are Joe Boddiford of Sylvania & Tim Burch of Newton. The GPC directors will elect a new chairman at their February board meeting.

Cheers to ten years for e-GRO!