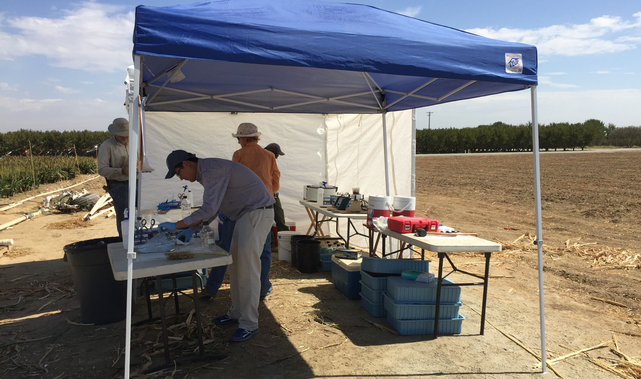 PARLIER, Calif. — Scorching temperatures and parched earth are no match for the sorghum plant — this cereal crop, native to Africa, will remain green and productive, even under conditions that would render other plants brown, brittle and barren.

A new study published this week in the journal Proceedings of the National Academy of Sciences provides the first detailed look at how the plant exercises exquisite control over its genome — switching some genes on and some genes off at the first sign of water scarcity, and again when water returns — to survive when its surroundings turn harsh and arid.

“With this research, we are laying the groundwork for understanding drought tolerance in cereal crops,” said Jeff Dahlberg, UC Cooperative Extension sorghum specialist. Dahlberg, co-author of the study, is also director the UC Kearney Agricultural Research and Extension Center in Parlier, one of nine research and extension centers in California that are part of UC Agriculture and Natural Resources.

Dahlberg said researchers can use the knowledge gained from this project to search for drought genes in other cereal crops.

“That has implications for feeding the world, particularly considering changing climate and weather patterns,” he said.

The massive dataset, collected from 400 samples of sorghum plants grown during 17 weeks at Kearney, reveals that the plant modulates the expression of a total of 10,727 genes, or more than 40% of its genome, in response to drought stress. Many of these changes occur within a week of the plant missing a weekly watering or after it is first watered after weeks of no precipitation or irrigation.

Kearney is a 330-acre agriculture research facility in the heart of California’s Central Valley, where field-scale, real-world research can be conducted on drought impact on plants and soil microbial communities. The climate is naturally dry throughout the summer, making it ideal to mimic drought conditions by withholding irrigation water.

“People have really shied away from doing these types of experiments in the field and instead conduct them under controlled conditions in the laboratory or greenhouse. But I believe that the investment of time and resources that we put into it is going to pay off, in terms of the quality of the answers that we get, in terms of understanding real-world drought situations,” said Peggy Lemaux, UC Cooperative Extension specialist in UC Berkeley’s Department of Plant and Microbial Biology and co-author of the paper.

The data was collected as part of the Epigenetic Control of Drought Response in Sorghum, or EPICON, project, a five-year, $12.3 million study into how the sorghum plant is able to survive the stress of drought. The EPICON study is run as a partnership between UC Berkeley researchers and scientists at UC Agriculture and Natural Resources (UC ANR), the Energy Department’s Joint Genome Institute (JGI) and that agency’s Pacific Northwest National Laboratory (PNNL).

Each week during the growing season, members of the research team carefully harvested samples from the leaves and roots of selected plants and set up a mobile lab in the field where they could rapidly freeze the samples until they were processed for analysis. Then, researchers at JGI sequenced the RNA in each sample to create the transcriptome data, which reveals which of the plant’s tens of thousands of genes are being transcribed and used to make proteins at particular times.

Finally, statisticians led by UC Berkeley statistics professor Elizabeth Purdom parsed the massive transcriptome data set to pinpoint how gene expression changed as the plants grew and were subjected to drought or relief from drought conditions.

“We very carefully controlled the watering conditions, and we sampled over the entire developmental timeframe of sorghum, so [researchers] could actually use this data not only to study drought stress, but also to study plant development,” Lemaux said.

The researchers noticed a few interesting patterns in the transcriptome data. First, they found that a set of genes known to help the plant foster symbiotic relationships with a type of fungus that lives around its roots was switched off in drought conditions. This set of genes exhibited the most dramatic changes in gene activity that they observed.

“That was interesting, because it hinted that the plants were turning off these associations [with fungi] when they were dry,” said John Vogel, a staff scientist at JGI and co-author of the paper. “That meshed well with findings that showed that the abundance of these fungi around the roots was decreasing at the same time.”

Second, they noticed that certain genes known to be involved with photosynthesis were also turned off in response to drought and turned up during drought recovery. While the team doesn’t yet know why these changes might help the plant, they provide interesting clues for follow-up.

The data in the current paper show the plant’s transcriptome under both normal conditions and drought conditions over the course of a single growing season. In the future, the team also plans to publish data from the other two years of the experiment, as well as proteomic and metabolomic data.

This research was funded in part by the Department of Energy (DOE) grant DE-SC001408; the Gordon and Betty Moore Foundation grant GBMF3834; the Alfred P. Sloan Foundation grant
2013-10-27; L’Ecole Normale Supérieure-Capital Fund Management data science chair and the DOE’s Office of Biological and Environmental Research grant DE-SC0012460. Work conducted by the DOE Joint Genome Institute is supported by the Office of Science of the DOE contract DE-AC02-05CH11231.