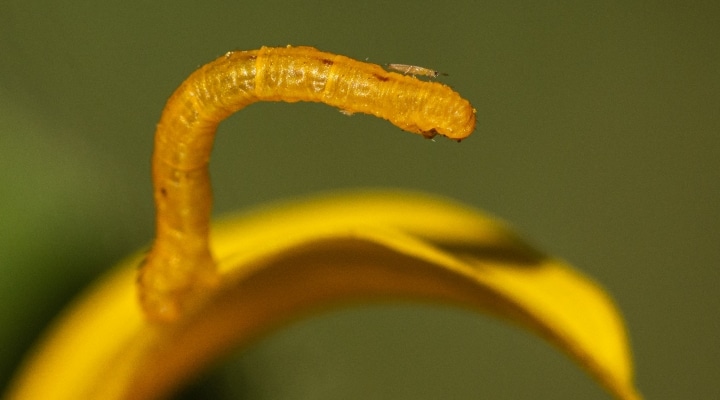 The western flower thrips – an invasive insect that’s not much bigger than a pinhead – takes a huge bite out of agriculture around the world, racking up billions of dollars’ worth of damage on a wide range of food, fiber and ornamental crops each year. Scientists now have a complete genetic blueprint to help them better understand the pest and to find ways to control it. (photo by Craig Chaddock, Creative Commons/flickr.com)

RALEIGH, N.C. — The western flower thrips – an invasive insect that’s not much bigger than a pinhead – takes a huge bite out of agriculture around the world, racking up billions of dollars’ worth of damage on a wide range of food, fiber and ornamental crops each year. Scientists now have a complete genetic blueprint to help them better understand the pest and to find ways to control it.

A peer-reviewed scientific paper published in BMC Biology today (Monday Oct. 19) fills a significant gap in agricultural science and insect science: It highlights the first genome sequence and analysis for a member of Thysanoptera, an order that contains over 7,000 species of small insects with fringed wings.

Dorith Rotenberg, associate professor with North Carolina State University’s Department of Entomology and Plant Pathology, is lead author of the paper. Fifty-six other researchers from universities and research institutions on five continents contributed.

Rotenberg said that the size of the team reflects the importance of the western flower thrips, or Frankliniella occidentalis, which is known to feed on hundreds of types of field and greenhouse-grown crops.

“They’re on everything — flowers, fruit trees, solanaceous crops – you name it,” Rotenberg said. “They’re a major pest of the Southeast U.S. and California as well as anywhere around the world you have a lot of fruits and vegetables growing.”

The project to sequence the thrips genome is affiliated with i5k, an ambitious international effort to sequence and analyze the genomes for 5,000 arthropod species – insects, crustaceans, spiders and other creatures with exoskeletons, segmented bodies and pairs of jointed legs.

The i5k initiative focuses on species important to agriculture, food safety, medicine and energy production and contributes to our understanding of evolutionary biology, ecology and more.

Rotenberg and her colleagues got started on the western flower thrips genome project by developing an inbred line of thrips. The Human Genome Sequencing Center of the Baylor College of Medicine then sequenced the genome and assembled it, and Rotenberg recruited scientists from around the world to manually check the automated DNA annotation, verifying the location of genes and determining what those genes do.

Western flower thrips are native to the western North America, but since the 1970s, they have spread quickly throughout the world. The insect damages plants not only by feeding and laying their eggs on them but also by infecting plants with viruses, including the devastatingly difficult-to-control tomato spotted wilt virus.

Tomato spotted wilt virus has been known to infect more than 1,000 plant species, ranging from tobacco and peanuts to pansies and chrysanthemums. In fact, TSWV’s host range is among the largest for plant viruses, and so is its geographical range.

While there’s been lots of research in recent decades aimed at curbing the toll that tomato spotted wilt virus and western flower thrips take on agriculture, Rotenberg said the genome could speed the development of solutions by helping researchers pinpoint molecular-level targets among the insect’s nearly 17,000 genes.

During the genome assembly project, scientists identified sets of genes related to the insect’s ability to thrive. Specifically, they found genes associated with the insect’s ability to develop and reproduce, to find plant hosts through taste and smell, to protect itself from pathogens and to detoxify chemicals that plants produce to repel insects and that humans use to kill them.

As Rotenberg noted, controlling the western flower thrips is difficult because the insect reproduces rapidly and becomes resistant to insecticides. In cotton, for example, there’s evidence that thrips have evolved resistance to 19 insecticides within six groups with different modes of action.

“Entomologists and growers know this very well: Thrips are notorious for building up resistance very quickly,” Rotenberg said. “And so you have to consider developing and using different types of chemicals and integrating alternative control strategies to manage this pest.”

Already, the availability of the western flower thrips genome is having an impact, Rotenberg says. In her NC State lab, she’s using the genome to advance her efforts to better understand the molecular-level interactions that take place between the western flower thrips and the tomato spotted wilt virus – research that could be vitally important to disease prevention.

“We want to find the molecules in the insect that interact directly with the virus that it transmits because if we know those molecules, then we can perhaps disrupt them in some way by interfering with the binding of the virus to the molecule of interest,” she said.

“And this is just the tip of the iceberg. Hopefully, (the genome) will be a resource that people can use for a long time, even as others start to develop new technologies or new resources that are even better.” 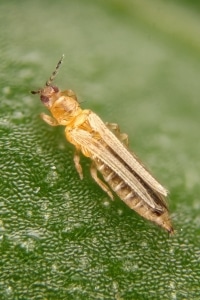 Genome-enabled insights into the biology of thrips as crop pests

Results: We report on the first genome sequence for any member of the insect order Thysanoptera. Benchmarking Universal Single-Copy Ortholog (BUSCO) assessments of the genome assembly (size = 415.8 Mb, scaffold N50 = 948.9 Kb) revealed a relatively complete and well-annotated assembly in comparison to other insect genomes. The genome is unusually GC-rich (50%) compared to other insect genomes to date. The official gene set (OGS v1.0) contains 16,859 genes, of which ~10% were manually verified and corrected by our consortium. We focused on manual annotation, phylogenetic and expression evidence analyses for gene sets centered on primary themes in the life histories and activities of plant-colonizing insects. Highlights include: 1) divergent clades and large expansions in genes associated with environmental sensing (chemosensory receptors) and detoxification (CYP4, CYP6 and CCE enzymes) of substances encountered in agricultural environments; 2) a comprehensive set of salivary gland genes supported by enriched expression; 3) apparent absence of members of the IMD innate immune defense pathway; and 4) developmental- and sex-specific expression analyses of genes associated with progression from larvae to adulthood through neometaboly, a distinct form of maturation differing from either incomplete or complete metamorphosis in the Insecta.