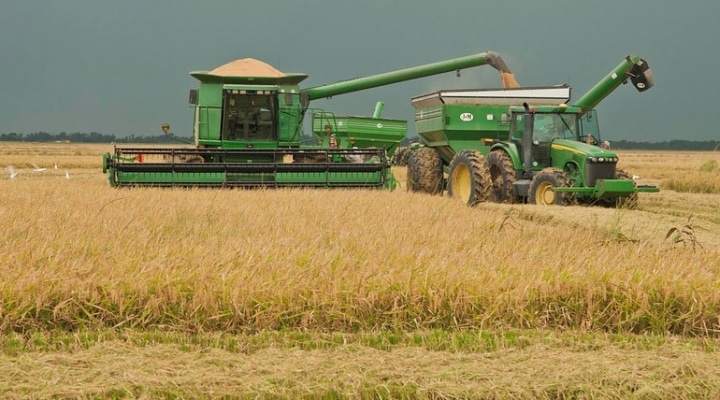 Rice is a staple food crop for more than half the world's population. (U.S. Department of Agriculture, Flickr/Creative Commons)

DAVIS, Calif. — Scientists at UC Davis have used CRISPR technology to genetically engineer rice with high levels of beta-carotene, the precursor of vitamin A. The technique they used provides a promising strategy for genetically improving rice and other crops. The study was published today in the journal Nature Communications.

Rice is a staple food crop for more than half the world’s population. Golden Rice, a genetically engineered rice with high levels of beta-carotene, has been approved for consumption in more than five countries, including the Philippines, where vitamin A deficiency in children is widespread. Because of the social impact of Golden Rice, the researchers chose the high beta-carotene trait as an example.

Conventional plant genetic engineering uses a bacterium or a particle gun to transfer genes encoding desired traits into the plant genome. In this case, researchers would use a bacterium to take beta-carotene producing genes and transfer them into the rice genome. But those transgenes can integrate into random positions in the genome, which can result in reduced yields.

“Instead, we used CRISPR to precisely target those genes onto genomic safe harbors, or chromosomal regions that we know won’t cause any adverse effects on the host organism,” said first author Oliver Dong, a postdoctoral scholar in the UC Davis Department of Plant Pathology and Genome Center.

In addition, the researchers were able to precisely insert a very large fragment of DNA that does not contain marker genes. By contrast, conventional genetic engineering relies on the inclusion of marker genes in the inserted DNA fragment. These marker genes are retained when the plant is bred over generations, which can often trigger public concern and stringent regulations of the transgenic products before their entrance to the marketplace.

“Scientists have done targeted insertions before and without marker genes, but we haven’t been able to do it with such big fragments of DNA,” said Dong. “The larger the fragment of DNA, the more biological function or complex traits we can provide the plants.”

Dong said this opens up the possibility that genes controlling multiple desirable traits, such as having high levels of beta-carotene as well as being disease-resistant or drought-tolerant, can be clustered at a single position within the genome. This can greatly reduce subsequent breeding efforts.

Ramping up the fight against Fall Armyworm