Home / Illinois / Genetic control for major agricultural weeds?
A new user experience is coming! We'll be asking you to login to your Morning Ag Clips account March 1st to access these new features.
We can't wait to share them with you! Read more here. 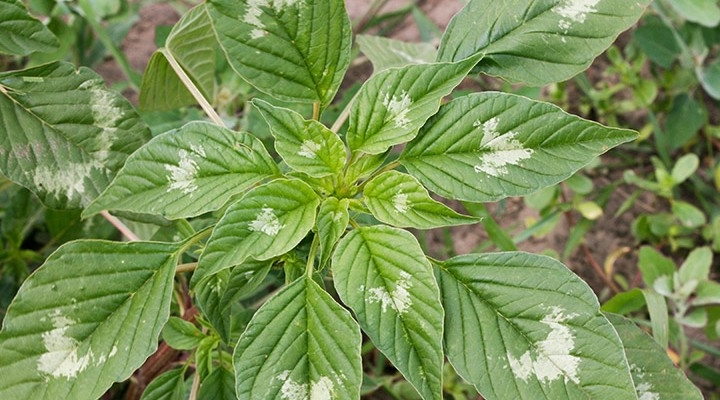 URBANA, Ill. — Waterhemp and Palmer amaranth, two aggressive weeds that threaten the food supply in North America, are increasingly hard to kill with commercially available herbicides. A novel approach known as genetic control could one day reduce the need for these chemicals. Now, scientists are one step closer.

In a study published today in Weed Science, researchers from the University of Illinois identified genetic signatures that distinguish male waterhemp and Palmer amaranth plants from females. The discovery is a crucial part of developing a genetic control system for the damaging weeds.

It’s a controversial strategy, but Pat Tranel, the U of I scientist leading the project, says they’re still in the very early stages.

“It’s important to emphasize that we are not at the point of releasing genetically modified waterhemp and Palmer. We are doing basic research that could inform how we could do that,” says Tranel, professor and associate head of the Department of Crop Sciences in the College of Agricultural, Consumer and Environmental Sciences at U of I.

He adds that the team hasn’t found the specific gene or genes for maleness in either species. Instead, they identified small genetic sequences associated with a male region, presumably on a particular chromosome. They think the specific gene(s) for maleness lies somewhere within that region.

In the study, the researchers grew 200 plants of each species and each sex, then extracted DNA and determined whether any sequences were unique to a given sex.

“We found sequences present in waterhemp and Palmer males that were not found in females, but no female-specific sequences. Then we took known males from other populations and looked for the sequences – they were there,” Tranel says. “Our sequences not only worked, they confirmed males are the heterogametic sex in these plants,” Tranel says.

In humans, males have an X and a Y chromosome, and male gametes, sperm, contribute either an X or a Y to the next generation. Females have two X chromosomes, and every egg carries an X. Males are heterogametic; females, homogametic. Similarly, male waterhemp and Palmer amaranth plants produce pollen with either the male-specific Y region or not.

“The fact that males are the heterogametic sex suggests that maleness is dominant. That’s good in that it’s easier to control the trait (maleness) if the gene for that trait is dominant,” Tranel explains. “When we get to the point of identifying the specific genes for maleness, they would be an obvious target for a gene drive where you could spread that maleness gene in the population.”

In the meantime, however, having a set of genetic sequences that can accurately identify males before flowering could help the researchers better understand the biology of the plants and their response to the environment. For example, Tranel says the discovery could help determine if the weeds are able to switch sexes under certain conditions or if one sex is more sensitive to herbicides. Both concepts have been proposed by previous research or anecdotal reports.

In addition to pursuing these basic questions, Tranel’s team is now working to find the needle in the haystack: the maleness gene within the male region. When they find it, it will take time before genetic control of waterhemp and Palmer amaranth could become a reality. And even then, Tranel says it will still be important to use all the tools in the weed management toolbox.

“I’d never see this as replacing all our other strategies,” he says. “But it’s super cool to imagine this as part of the solution.”

Almonds don't lactate: Farmers call on FDA to do its job