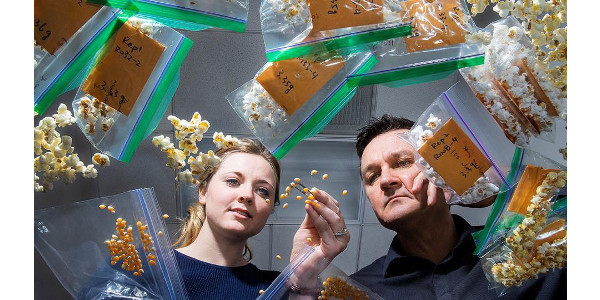 Nebraska's David Holding (right) and Leandra Marshall (left) are developing lines of popcorn featuring higher levels of lysine, an amino acid essential to the diets of humans and some livestock. (Photo by Craig Chandler, University Communication)

LINCOLN — Two kernels of the same idea — cultivating protein quality in cereal grains — are reaching maturity at the University of Nebraska–Lincoln.

The quality of protein often gets overshadowed amid the spotlight on its quantity. But that quality — the presence or absence of amino acids essential to the diets of humans and livestock — occupies the mind of Nebraska’s David Holding.

Holding and his colleagues at the Beadle Center have spent years working to raise levels of a vital amino acid, lysine, that’s scarce in the protein of several cereal grains. By adopting different approaches — one traditional, the other emergent — the team has now managed to roughly double the lysine content of both popcorn and sorghum.

Higher lysine could add economic value and broaden the appeal of popcorn, the researchers said, while enhancing the nutritional value of the movie-theater favorite. Boosting lysine in sorghum should make the drought-resistant crop a more complete source of nutrition in the developing world, where it sometimes ranks as a dietary staple, and for livestock in the United States.

Popping Out the Dent

Dent corn, a worldwide crop and the signature variety of the Midwest, is deficient in lysine. But in the 1990s, researchers successfully bred a gene variant known as opaque-2 into dent corn. In lowering the production of normally dominant prolamin proteins, opaque-2 allowed for a rise in non-prolamins: those containing lysine and another essential amino acid, tryptophan. The resulting variety — Quality-Protein Maize, or QPM — has since helped combat malnutrition in many developing countries.

With the backing of Conagra Foods, Holding decided to try the same in popcorn.

“It turns out that that’s really difficult to do,” said Holding, associate professor of agronomy and horticulture.

The problem was at once simple and complex: Popcorn containing opaque-2 wouldn’t pop. And that problem stemmed from what’s in its name: Opaque-2 tends to turn popcorn’s normally hard, glassy kernels into softer, chalkier forms resistant to popping.

Agronomists had previously managed to breed the undesirable trait out of the QPM dent corn, which was otherwise more susceptible to pests and harvesting damage. But they did so mostly without knowing which genes helped restore the kernels’ glassy consistency.

Holding had devoted considerable time to identifying swaths of the corn genome responsible for restoring that glassiness. So he set out to cross-breed multiple generations of the QPM dent corn with popcorn varieties suspected to contain the restorative genes.

The outcome? High-lysine popcorn that pops nearly as well as the original variety.

“When this project started, I wasn’t sure we could achieve that, given that people hadn’t been very successful in transferring beneficial traits from dent corn to popcorn in the past,” Holding said. “We’re the first to take the dent QPM variety and successfully convert that into popcorn, achieving high lysine and maintaining popping.

“This is a product that lends itself to organic production and can be marketed as a novel popcorn variety, as consumers are paying more attention to their foods’ nutritional value. For popcorn breeding in general, this also shows the potential for mining other traits from dent corn into popcorn to improve the crop’s agronomic performance.”

Building on the work of recent doctoral graduate Ying Ren, doctoral student Leandra Marshall is now cross-breeding multiple lines of the high-lysine popcorn to promote stronger, higher-yielding hybrids suitable for the field. Sequencing the genomes of those lines might also allow the team to pinpoint exactly which genes restored the kernels’ structural integrity, she said.

Along with their own lysine deficiency, sorghum proteins have a related issue: Humans and some livestock struggle to digest them, a problem that only gets worse when they’re cooked.

To address both issues, Holding’s team turned to the revolutionary biological tool known as CRISPR-Cas9, a DNA-enzyme combination that can be targeted to precisely edit genes. Using CRISPR-Cas9, the researchers effectively targeted a family of about 20 genes known to kick-start the production of prolamin proteins.

Instead of silencing those genes entirely — leading to impractically soft, chalky kernels — the group programmed the tool to partially deactivate the gene family, an application of CRISPR-Cas9 that Holding called the first of its kind.

Once again, the researchers saw a rise in the lysine-housing non-prolamin proteins, even as enough prolamins remained to maintain the kernels’ solidity. At the same time, microscopic vessels containing those prolamins morphed into a more porous form, allowing digestive enzymes to penetrate and begin breaking down the proteins. Follow-up experiments showed that nearly twice as much of the resulting flour’s protein could be digested.