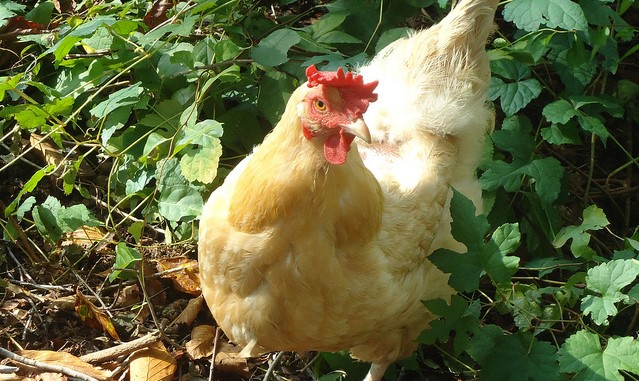 Researchers found that a set of genes differentially expressed in two breeds of chickens can fight off, in varying degrees, Newcastle disease, a virus that hampers poultry production worldwide. (Stock photo via Meg Stewart, Flickr/Creative Commons)

UNIVERSITY PARK, Pa. — An international team of scientists, led by Penn State researchers, have identified genes that may help farmers, especially ones in low- and middle-income countries, breed chickens that can resist one of the biggest disease threats facing poultry today.

In the study, the researchers found that a set of genes differentially expressed in two breeds of chickens can fight off, in varying degrees, Newcastle disease, a virus that hampers poultry production worldwide.

Identifying the genes that help chickens survive Newcastle disease could help design breeding strategies that produce flocks that are more resilient and more productive, according to Vivek Kapur, professor of animal science and the Huck Distinguished Chair in Global Health, associate director of the Huck Institutes of the Life Sciences, and an Institute for CyberScience associate, all at Penn State.

“These local ecotypes of chickens have been running around backyards for hundreds of years, even in the face of constant exposure to Newcastle disease, so, evolutionarily, there’s something innate that has enabled them to survive in this environment where the disease is endemic,” said Kapur. “Yet, birds that are bred for high productivity as is the case in high-income countries — they put on weight very quickly, produce a lot of eggs — their survival in the presence of infectious diseases was not selected for because there is usually a tradeoff between increased resistance to disease and egg or meat production. Using genomics and sophisticated analytical tools, we asked the question whether there are differences in specific genes expressed in backyard chickens that markers for lower susceptibity to Newcastle disease virus infection.”

If Newcastle disease is present in a flock, the result can be devastating, according to Megan A. Schilling, lead author of the study and who recently defended her doctoral dissertation in the Molecular, Cellular and Integrative Biosciences program at the Penn State Huck Institutes of the Life Sciences.

“Newcastle disease is an important poultry pathogen,” said Schilling. “You might not hear much about this disease in the U.S. as it is generally well-controlled, but it’s endemic in a lot of African and Asian countries. If a virulent strain is introduced into a flock, it will wipe out the flock and cause significant economic burden, particularly for smallholder farmers.”

There is a vaccine for the disease, but it is not used in many countries because the logistics and costs that are involved often make it impractical to use a vaccination to protect small flocks in many countries, said Kapur.

“If you have 20 chickens in your backyard, for example, you first have to find someone who will come give your flock the vaccine and there’s a cost involved in that whole process and on top of that the vaccine has to be available,” said Kapur. “The barriers, both real and perceptional, are therefore rather high for backyard farmers to vaccinate their chickens.”

The researchers, who reported their findings in a recent issue of Scientific Reports, used an innovative technique to study the innate immune response of two breeds of chickens, the Fayoumi and Leghorn. Rather than using animal studies, or cell lines, the researchers used chicken embryos. Because the immune system of the chicken becomes viable in the egg prior to hatching, the researchers have a window to study the immune system’s genes, which offers several advantages over other methods, said Schilling.

“Generally, these types of studies are either performed in cell lines, which are great to make advances in our understanding of the science, but they’re not capturing the whole organism’s response to the pathogen,” said Schilling. “On the other hand, you have animal studies, which are expensive and you have a lot of husbandry included and bio-security is a factor, all of which might lower your sample sizes, just due to those cost or logistical constraints.”

While Newcastle disease is not considered a major threat in the United States currently, that could change for Americans who are raising chickens as hobbyists and for major poultry production facilities, according to the researchers. A recent outbreak of Newcastle disease in Southern California caused the deaths of more than 1.2 million chickens.