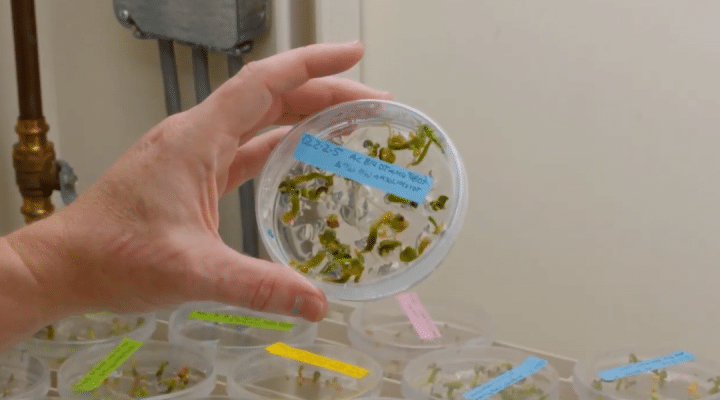 The soybean checkoff is funding a multistate project to identify additional resistance genes and make the most common source of SCN resistance, known as PI 88788, more durable. (The SCN Coalition, YouTube)

Researchers have identified genes in soybean plants with natural resistance to nematodes that feed on soybean roots but are now expanding the scope beyond that. This is being done by two basic gene-editing approaches. “Whenever we need to add genes, we can make transgenics in the laboratory,” says University of Georgia Plant Geneticist Wayne Parrott. “But half of the time we want to remove genes, and we use CRISPR gene editing for that. This allows us to provide a much wider variety of traits to soybean growers, and we’re getting it done faster.”

Using these advanced methods allows researchers to more quickly identify targets that will be effective in fields against costly pests such as SCN and SRKN. “Soy checkoff-funded research leads to technology advancements that benefit U.S. soybean producers,” says Lewis Rone, United Soybean Board farmer-leader and soybean grower from Portageville, Missouri. “The quicker researchers are able to identify what targets are going to be most effective to win the battle against this billion-dollar-per-year pest, the quicker soybean growers can deploy these solutions in fields.”

What does the future hold for nematode management?

The soybean checkoff is funding a multistate project to identify additional resistance genes and make the most common source of SCN resistance, known as PI 88788, more durable. “With many SCN populations reproducing on PI 88788, we want to improve its performance,” Mitchum says. “We are looking at different rotations to see how nematodes are responding to the different types of genetic resistance to determine which types of resistance we should combine.”

“If we determine a population has adapted to PI 88788, we can recommend a pyramid that is more resistant to SCN,” adds Mitchum. “Then a grower can rotate that with other sources of SCN resistance, such as Peking. In the future, we want to prescribe how a grower should be rotating those resistant varieties to get the best reduction in SCN population densities in the field to protect yield, as well as integrate the use of novel resistance genes bioengineered using gene editing technologies.”

About The SCN Coalition
The SCN Coalition is a public/checkoff/private partnership formed to increase the number of farmers who are actively managing SCN. Our goal is to increase soybean farmers’ profit potential and realize higher yields. Partners in The SCN Coalition include university scientists from 28 states and Ontario, Canada, grower checkoff organizations including the North Central Soybean Research Program, United Soybean Board and several state soybean promotion boards, and corporate partners including BASF, Bayer, Growmark, Nufarm, Pioneer (Corteva), Syngenta, Valent and Winfield United.

Southern Region May crop production
May 15, 2022