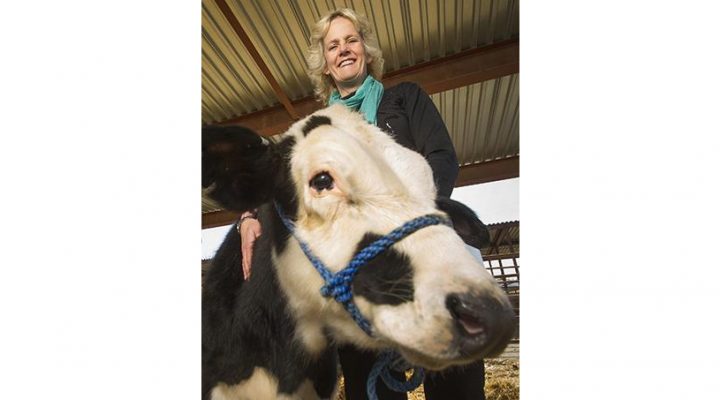 Thanks to gene editing, this 7-month-old calf, pictured with UC Davis animal scientist Alison Van Eenennaam, does not grow horns and so will not have to go through the dehorning process. (Karin Higgins/UC Davis)

DAVIS, Calif. — Gene editing — one of the newest and most promising tools of biotechnology — enables animal breeders to make beneficial genetic changes, without bringing along unwanted genetic changes.

She will examine the potential benefits of genome editing Friday, Feb. 17, at the annual meeting of the American Association for the Advancement of Science, to be held in Boston’s Hynes Convention Center. Her presentation will be part of a 3 p.m. EST session titled “The Potential of Gene Editing to Revolutionize Agriculture,” moderated by acclaimed molecular biologist Nina Federoff.

Van Eenennaam also will participate in a news briefing on this topic at noon EST on Saturday, Feb. 18, in Room 103 of the convention center.

Lessons from the dairy industry:

Thanks to improvements made in the dairy industry through traditional breeding, a glass of milk today is associated with just one third of the greenhouse gas emissions linked to producing a glass of milk in the 1940s, says Van Eenennaam, a UC Cooperative Extension biotechnology specialist in the UC Davis Department of Animal Science.

That was accomplished as traditional selective breeding improved the productivity of dairy cows so much that the number of dairy cows in the United States dropped from a high of 25.6 million in 1944 to about 9 million today, even as the country experienced a 1.6 fold increase in total milk production, she says.

She notes that genome editing has already been used to prevent livestock disease, including making pigs resistant to porcine reproductive and respiratory virus, and to improve animal welfare by developing dairy cows that don’t require horn removal.

Research is underway to extend applications of gene editing in the future. Gene editing might, for example, make it possible to produce offspring of only one gender, such as only hens for egg-laying operations.

The potential for applying gene-editing techniques to make improvements in food-animal production largely hinges on future regulatory processes, according to Van Eenennaam.

“It’s not yet clear what regulatory status food-animals produced with gene editing will have,” Van Eenennaam says, noting that gene editing does not transfer novel DNA into an animal, but can be used to make changes within the animal’s own genes.

“The resulting DNA sequence may be identical to existing, naturally-occurring DNA sequences,” she says. “The prospect that gene-edited animals would be subject to the same type of regulations that apply to an animal drug — even though their genetic modifications might be indistinguishable from those obtained through conventional breeding — is a concern for animal breeders who are eager to employ genome editing to complement traditional genetic improvement programs.”