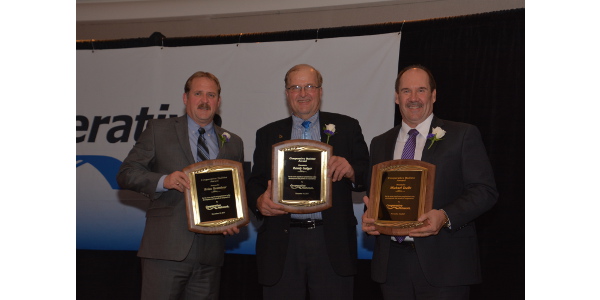 ST. PAUL — At a special banquet in their honor during the Cooperative Network annual meeting, Randy Geiger, Brian Krambeer and Michael Toelle were bestowed the 2017 Cooperative Builder Award, the organization’s highest honor. The award is presented to individuals who have made outstanding contributions at the local, state, and/or national level to advance cooperative philosophy and ideals.

Randy Geiger owns and operates Ran-Rose Dairy Farms in Reedsville, Wis. Geiger has served on a number of cooperative and agricultural organization boards, committees and workgroups. These include efforts to educate young people about agriculture, push Federal Milk Marketing Order Reform and promote Beef Checkoff programs. Since its formation in 2013, Geiger has served on the FarmFirst Dairy Cooperative board of directors. FarmFirst Dairy Cooperative owes much of its formation to the leadership role that Geiger played to bring together three of Wisconsin’s leading dairy cooperatives into one powerful entity, with more than 4,000 members. Prior to the formation of FarmFirst, Geiger served as chairman for more than a decade for one of the predecessor organizations, Manitowoc Milk Producers Cooperative.

For nearly 30 years, Brian Krambeer has been a builder of partnerships and cooperatives. He was instrumental in creating MiEnergy Cooperative, which merged Tri-County Electric Cooperative and Hawkeye REC across state lines and has provided numerous benefits to members as a result. In August 2007, Krambeer led Tri-County Electric Cooperative through a devastating natural disaster that compromised the cooperative’s headquarters, warehouse and equipment. Under his leadership, Tri-County Electric Cooperative didn’t miss a beat. Lines were rebuilt and service to members was reenergized in amazing time amidst chaos. Krambeer’s relationships with local legislators played a critical role in the creation of legislation that automatically includes cooperatives to receive aid in future disasters. Krambeer has formed partnerships with other cooperatives to establish renewable energy generation, provide members with security services and help them save money on purchasing utility equipment.

Michael Toelle owns and operates a diversified corn, soybean, wheat and swine business in Minnesota and Manitoba, Canada. He has served his fellow co-op members as a director of his local Browns Valley Cooperative, as well as Cenex Inc., CHS Inc. and now the Nationwide Mutual Insurance Company. After college, Toelle quickly recognized the value of cooperatives and their ability to connect farmers to the global marketplace. He also knew achieving that in a changing world would require strong vision and leadership. Although Toelle was one of the youngest directors ever to serve on the Cenex board, he set himself apart as a leader when he served on the core committee that resulted in the 1998 creation of CHS Inc., the largest U.S. cooperative, a global presence in agriculture and energy, and a Fortune 100 company.

How to assess fall N loss