Home / Colorado / Gardner testifies at hearing on cannabis challenges
A new user experience is coming! We'll be asking you to login to your Morning Ag Clips account March 1st to access these new features.
We can't wait to share them with you! Read more here. 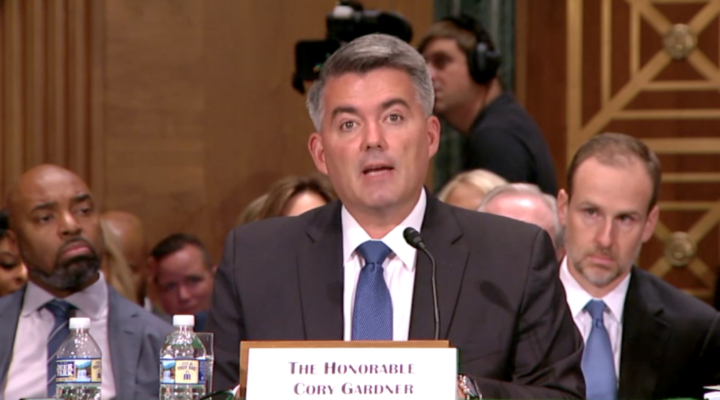 Senator Gardner testified about two bills he is leading in the Senate. (Courtesy Photo)

WASHINGTON — U.S. Senator Cory Gardner (R-CO) recently testified at the Senate Committee on Banking, Housing, and Urban Affairs for a hearing titled, “Challenges for Cannabis and Banking: Outside Perspectives.” The hearing focused on the challenges for cannabis owners and sellers in states where marijuana has been legalized. Senator Gardner testified about two bills he is leading in the Senate, S. 1200, the Secure and Fair Enforcement (SAFE) Banking Act of 2019 to address conflicting federal and state marijuana laws, and S. 1028, the Strengthening the Tenth Amendment Through Entrusting States Act (STATES Act).

Thank you, Ranking Member Brown, as well to everyone on the panel for the opportunity to speak before you today.

This is a difficult hearing. A difficult topic, I know that. But we were sent here to deal with difficult topics and I am grateful for the opportunity to talk about this today. It’s an important step forward, the first hearing we’ve had on this issue as the federal government wakes up to the reality that the cannabis issue is not going to go away and we must have action.

There has been a dramatic shift in Americans’ views of cannabis in recent years. Polling shows that about 65% of Americans support legalization of marijuana. 93%,  93% of the American public support medical marijuana. In fact, majorities of both parties support legalization. In a time when all the talk is about how divided we are in a country, we are remarkably united on this issue.

Given that support, it shouldn’t be surprising that the vast majority of states have changed their laws. 47 states now allow some form of cannabis. I recognize that my good friends from the 3 that have not – Idaho, Nebraska, and South Dakota – on this committee. That represents more than 95% of our population living in a state with laws allowing some form of cannabis.

This disconnect between federal and state marijuana laws has become, as the Attorney General has testified, both “intolerable” and “untenable.”

The dramatically expanded cannabis industry presents real challenges for our nation. I have been a skeptic about cannabis legalization. It is no secret that I opposed the legalization in Colorado.

I was concerned about the effects of legalization on Colorado’s youth and public safety. I was leery of breaking with the federal government. I was uneasy about adding another intoxicate into our culture, and I did not – and still do not – want to encourage my own children to use marijuana.

Several years into legalization in Colorado, I can say though that the sky has not fallen.  There are challenges to be sure: Colorado has seen an increase in transient populations. There are concerns about traffic safety and hospitalizations. And cannabis has been illegally trafficked into neighboring states.

But according to a recent JAMA Pediatrics report, youth use is about 10% lower in legalized states. One strong theory as to why that’s the case is that legal dispensaries both force out illegal sellers and enforce age limits. So, youth actually have less access to marijuana.

The data on crime are mixed. Marijuana offenses are down. Colorado has also experienced an increase in violent crime, but that’s likely driven by an increase in transient populations moving to the state.

At the same time, the state has brought in over $1 billion in tax revenue. Last year alone, the state received more than $266 million in marijuana taxes. Millions of those dollars are ending up in Colorado schools.

In short, the sky is not falling in Colorado.

Instead, what makes the current situation intolerable and untenable is the disconnect between federal and state law.

For instance, every single state-legal cannabis transaction in Colorado is federally illegal. That means the dollars involved are the proceeds of an unlawful transaction under the federal money laundering statutes. That means that all of the different parts of our economy that connect to any legitimate business – plumbers, electricians, lawyers, accountants, landlords, etc. – risk becoming federal criminals for serving a client legal under Colorado law.

That also means that the $1.5 billion industry a year in Colorado is nearly all cash. Banks will not accept industry money for fear of regulatory action or federal forfeiture.

Keeping those dollars out of banks means we lose the ability to trace where the dollars go.  It also means that it’s harder to ensure that all taxes are being paid. It makes it easier for criminals in the illicit market to pose as legitimate. And it leaves hundreds of millions of dollars of cash in the state.

For example, the State Department of Revenue has one location that accepts cash – Just one location. So, business owners in the western part of the state often have to drive 5 or more hours with tens of thousands of dollars in cash just to pay their taxes.

The cash creates a genuine public safety problem. Stockpiles of cash make the industry a target for thieves. In 2016, a 24-year-old former Marine was tragically shot and killed while on duty as a security guard at a dispensary.

And we are making it hard for these businesses to comply with the law. A few months ago, a partner at a major national law firm told me that the firm’s bank accounts were going to be shut down because they counsel state-legal cannabis clients.

I’ve also heard from the city officials in the town of Desert Hot Springs, California.  For them, lack of banking means that when they take in a million dollar bond for a cannabis business, it takes days to count the cash. It takes several of their employees off their normal work and it requires extra security guards in their offices.

All of this is just scratching the surface of the financial services problems caused by the federal/state disconnect. I haven’t mentioned the problems with research or veteran’s access, or the EPA refusing to certify pesticides for use on cannabis, or the FDA’s struggle to police advertising claims, or the confusion created for law enforcement, or any of the other myriad problems that contribute to this intolerable and untenable situation.

Our failure to act seems to be grounded in two incorrect assumptions. The first is that we can continue prohibition. We can’t. We are a government of the People and the People have changed their views. So, our laws much change.

The second is that we can come to a national consensus for full-throated legalization in the near-future. We can’t. There are still too many unanswered questions. Many states that have legitimate concerns. If those seeking reform insist on swinging for the fences, they will strike out and lose the chance for real improvement.

I believe Senator Merkley recognizes this. I appreciate his efforts to provide real concrete improvement for the financial services industry with the SAFE Banking Act.

I believe Senator Warren recognizes this. I appreciate her efforts to forge a compromise to allow the states to move at their own pace with the STATES Act.

And I believe you, Ranking Member Mr. Brown, my friends on the committee, will see through this hearing that we must act. Thank you for holding this hearing, and thank you very much for the opportunity to speak with all of you today.

Next generation of Nat'l Junior Angus Board