Home » Gardens program teaches how to make a milpa 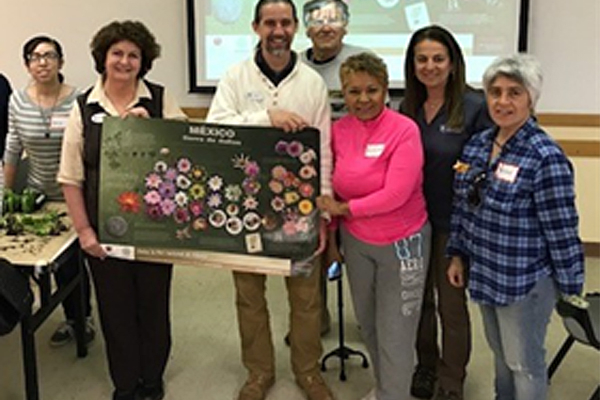 On April 28, Longwood Gardens presented a practical course in English and Spanish to teach participants how to make a milpa in the 21st century. (Penn State Extension, Chester County)

WEST CHESTER, Pa. — On April 28, Longwood Gardens presented a practical course in English and Spanish to teach participants how to make a milpa in the 21st century. Nearly 20 people attended hands-on course and lecture led by Neil Gerlowski, Longwood Gardens Fellow and Executive Director, Vallarta Botanical Garden; and Maria Gorgo-Gourovitch, Penn State University Horticulture Extension Educator in Chester and Berks counties. Maria is originally from Buenos Aires, Argentina and one of her main goals has been to expand the university’s efforts to reach out and assess the needs of the Latino Community in Pennsylvania by developing culturally appropriate educational materials and trainings in Spanish for this community.

A milpa is a Mesoamerican agricultural system utilized in much of Mexico and parts of Central America. The term is sometimes defined as “maize field” but is more commonly used to name a place where maize is cultivated along with a combination of nutritionally and environmentally complementary crops. Today, the concepts of the milpa are worked into gardens with plants from throughout the world. Participants learned about pre-Columbian horticultural practices that gave birth to some of the world’s greatest civilizations whose principles help drive popular modern movements such as permaculture.

Over the course of four hours, participants learned the basic principles of a milpa including garden design concepts, soil testing, preparation for optimal vegetable garden production and basic culture and plant care. Later in the day, the instructors discussed plants that have been traditionally associated with the milpa as well as plants that would make great additions to a modern, Mid-Atlantic reinterpretation of a milpa. Plant information shared included tips for planting and harvest as well as traditional uses and cultural connections.

This course concluded with an interpretive tour of Longwood’s Idea Garden with a focus on plants that are appropriate for including in a milpa. Longwood is including several traditional meso-American plants such as Bolivian coriander (Porophyllum ruderale) and queets (Ullucus tuberosus) which delighted the audience. This year these crops as well as many other vegetables, herbs and flowers with global interest are on display in the Idea Garden

The flow of questions and discussions during this culminating activity clearly demonstrated how highly engaged and inspired the course participants became. Neil was very pleased to have engaged with such an enthusiastic audience over a topic that he has had the privilege of learning much about during his eight years of leadership at one Mexico’s premiere gardens. When guests had a chance to share their personal experience with the crops, it brought together nostalgic memories from their own experiences with Mexico, Central and South America. Participants went home with plants and seeds to start their own garden or enhance their existing vegetable and flower gardens in a symbiotic relationship similar to the practices that have evolved over the past millennia.

Longwood’s Director of Continuing Education, Matthew Ross, who helped develop the concept and curriculum for the course, said, “This was an exciting way to engage with the Latino community and those who wanted to learn more about gardening and the science behind traditional techniques. By hosting a bilingual event, it encouraged those that may have had a language barrier to attend an immersive educational experience.”

With roots in ancestral knowledge, connections to deeply fascinating traditions and endless opportunities for innovation and personal expression, a modern interpretation of a milpa has boundless potential to complement lives and touch hearts. Don’t be surprised to see one soon in a neighborhood near you.