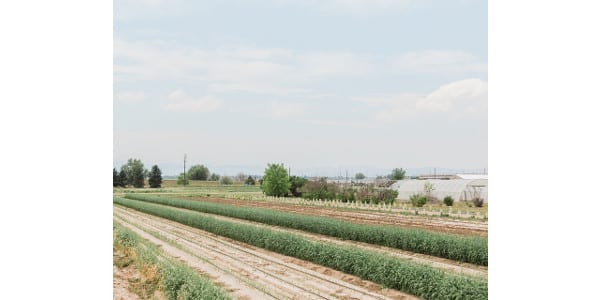 As harvest season winds to a close, a new student-run food garden established on just four rows of farmland at ARDEC South will have contributed roughly 2,000 pounds of produce to fight food insecurity at Colorado State University. (Courtesy of CSU)

FORT COLLINS, Colo. — As harvest season winds to a close, a new student-run food garden established on just four rows of farmland at ARDEC South will have contributed roughly 2,000 pounds of produce to fight food insecurity at Colorado State University. What began as an opportunity for CSU graduate students to learn the ins-and-outs of farming has turned into a crucial resource as the global pandemic left many people seeking help to put food on the table.

“There have been many food programs that have popped up because the need is so great right now,” said Savannah Hobbs, a PhD candidate in Food Science Human Nutrition and organizer of the new garden. “It’s showing the need was always there. A lot of people are one step away from being in a position where they need access to food.”

The idea for the garden kickstarted earlier this year when William Folsom, manager of ARDEC South, approached Hobbs about using open space to create a donation garden. The facility had donated crops to food banks in the past, so this seemed like a natural extension of the idea.

“They needed bodies to come and harvest crops and I was hearing from grad students that they wanted opportunities for volunteer work, to grow things and to learn these skills, but also to have access to fresh produce,” said Hobbs.

Hobbs sent a message through the CSU graduate student listserv seeking volunteers to help start a donation garden and the response was overwhelming. While the team originally wanted to extend the opportunity to 20 graduate volunteers, COVID restriction caused them to quickly pivot and whittle that number down to four.

A sustainable project providing for the needs of people

Hobbs consulted with Amanda McQuade, director of the Community Alliance for Education and Hunger Relief at the Western Colorado Research Center—Orchard Mesa, on what types of produce are best-suited for growing with the intent to donate.

“Dr. Amanda McQuade provided a lot of feedback about the types of crops that are popular among students and staff, as well as the type of crops that will do best,” said Hobbs. “We had a really early freeze this year but our crops survived and it’s mostly due to the experts we had on the team who have worked on something like this before.”

In total, the crew of four volunteers grew roughly 2,000 pounds of cucumbers, tomatoes, watermelons, squash and two varieties of peppers on a small plot of four rows of farmland.

“The pilot season taught us that we can start with a small workforce,” said Hobbs. “Four students, working two hours every-other-week can really produce a lot of food.”

While Hobbs is proud of the work put in, she’s also proud of how the team built a sustainable project that will continue throughout the years.

“It’s a win-win-win for everybody,” said Hobbs. “Students are getting experience, we’re producing food for students and staff that want food, and we’re not using any new land or techniques. It’s also very cost-effective as this land wasn’t going to be used this year. We’re not renting anything. It was just water cost and seeds, that’s really all it came down to. What’s the work that we’re putting into it compared to the output? This has very little work input with a large output.”

Organized by CSU Extension, this program encourages residents to create victory gardens and to donate grown produce to the Grow & Give program.

This state-of-the-art facility grows lettuce that is donated to dining centers via the CSU Housing and Dining Services.