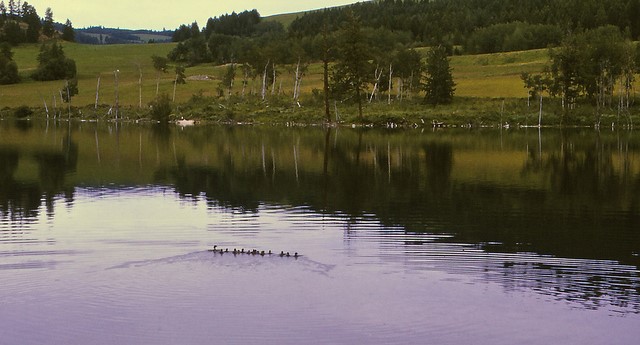 After years of drought, Northern California has endured several months of exceptionally wet weather. Oroville and other lakes are brimming and have begun releasing water to make room for more runoff. (Pat Strosahl, Flickr/Creative Commons)

OROVILLE, Calif. (AP) — A gaping hole in the spillway for the tallest dam in the United States grew Thursday and California authorities said they expect it will continue eroding as water washes over it but the Oroville Dam and the public are safe.

Earlier this week, chunks of concrete flew off the nearly mile-long spillway, creating a 200-foot-long, 30-foot-deep hole. Engineers don’t know what caused cave-in that is expected to keep growing until it reaches bedrock.

But faced with little choice, the state Department of Water Resources resumed ramping up the outflow from Lake Oroville over the damaged spillway to keep up with all the runoff from torrential rainfall in the Sierra Nevada foothills.

Officials said the critical flood-control structure is at 90 percent of its capacity. But the dam is still safe and so are Oroville’s 16,000 residents.

“The integrity of the dam is not jeopardized in any way because the problem is with the spillway and not the dam,” department spokesman Eric See said.

Located about 150 miles northeast of San Francisco, Oroville Lake is one of the largest man-made lakes in California and 770-foot-tall Oroville Dam is the nation’s tallest.

The lake is a central piece of California’s government-run water delivery network, supplying water for agriculture in the Central Valley and residents and businesses in Southern California.

After years of drought, Northern California has endured several months of exceptionally wet weather. Oroville and other lakes are brimming and have begun releasing water to make room for more runoff.

The initial damage to the spillway occurred Tuesday, about 3,000 feet downstream from where water enters from the lake. The water flowing out of the hole quickly turned brown with mud as it consumed trees and soil before rejoining the main channel below in a massive confluence wave that sent up clouds of mist in the tree-lined canyon.

That’s not enough to keep the lake from continuing to rise, officials said, but is expected to keep them from having to use a nearby emergency spillway that has never been used since the dam was dedicated in 1968, when Ronald Reagan was governor.

As a backup plan, state workers and contractors were pulling out trees and bushes by the roots from the emergency spillway to keep them from floating downstream.

If the department can’t keep using the eroded concrete spillway, Lake Oroville would naturally flow over an ungated concrete crest into the mostly unlined emergency spillway once the reservoir reaches 901 feet elevation. The reservoir came within a foot of flowing over in January 1997.

Meanwhile, workers at a state hatchery for California’s native Chinook salmon loaded up all the millions of baby salmon into tanker trucks Thursday afternoon to try to save them from the mud, concrete chunks and other debris coming their way from the crumbling spillway.

The hatchery, on the Feather River, is vital to the survival of chinook salmon, whose numbers have dwindled during the drought. Hatchery managers planned to take the tiny young salmon to another holding point they hoped was far enough away.

The department continued to operate hydraulic power plants both at the base of the Oroville dam and downstream, Thomas said, with contingency plans in place to protect them. If they have to be shut down, which is not anticipated, he said state power managers would draw from other sources on the interconnected electrical grid.

Can your nutrition plan predict the future?