Home / Colorado / GameteGuard® awarded Certified Semen Services® approval
A new user experience is coming! We'll be asking you to login to your Morning Ag Clips account March 1st to access these new features.
We can't wait to share them with you! Read more here. 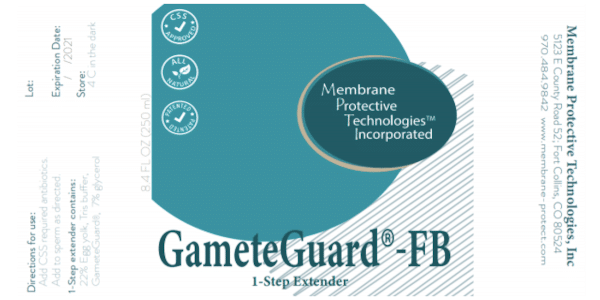 Membrane Protective Technologies Incorporated (MPTI) is an R&D company whose mission is to develop distinctive technologies designed to significantly enhance the success of artificial insemination (AI).

FORT COLLINS, Colo. — Membrane Protective Technologies Incorporated (MPTI) is an R&D company whose mission is to develop distinctive technologies designed to significantly enhance the success of artificial insemination (AI). The focus of its first product, GameteGuard®-FB extender, was to improve the quality of bovine sperm resulting in improved conception rates.

GameteGuard® is a plant-extracted, antioxidant rich extender that protects sperm from the oxidative stress of freezing and thawing. In field trials nearly 2000 head of cattle (beef and dairy), bull sperm frozen GameteGuard® extender has yielded a 20% improvement in conception rate.

Since then, GameteGuard® has successfully been translated into other species such as goats, sheep, swine, and the in vitro production of bovine embryos. Most recently, the company has developed a cryopreservation extender for boar semen (over 90% of sows in the U.S. are bred using artificial insemination using fresh cooled semen) which results in similar pregnancy rates as cooled semen.

MPTI is pleased to announce the approval of GameteGuard®-FB by Certified Semen Services (CSS). The above approval has been granted to both one-step and two-step extenders for the preservation of domestic and international bull sperm.

CSS is subsidiary business owned by National Association of Animal Breeders (NAAB) and was established to standardize the requirements necessary to minimize disease transmission and processing of bull semen for cryopreservation. After a thorough review and testing process, GameteGuard®- FB 1- step extender was found toto meet the CSS requirements necessary to be utilized as a semen extender for both domestic and international use. Therefore, business such as bovine genetic centers, veterinary offices and other business that cryopreserve sperm cells now have an alternative extender and a way to help their customers achieve greater success in their breeding programs.

“We are humbled by the success of GameteGuard®-FB to protect cells during cryopreservation.” Says Lisa Herickhoff, Ph.D., president of MPTI. “The CSS approval opens doors to share the benefits of this technology with the wider industry.”