Home » Gallagher carries on luck of the Irish 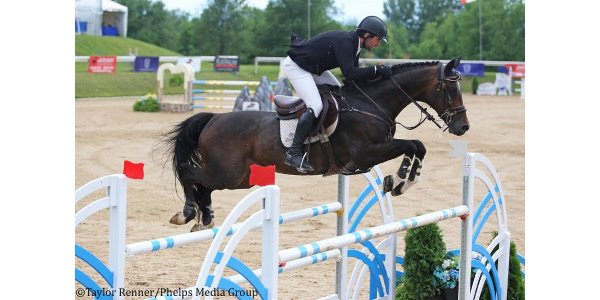 TRAVERSE CITY, Mich. — The first FEI competition of the 2017 Great Lakes Equestrian Festival (GLEF) got underway on Friday at the Flintfields Horse Park in the Grand Prix Ring with the $35,000 World Equestrian Center Welcome Stake CSI2*. Ireland continued its winning streak from Week One, where Shane Sweetnam of Sweet Oak Farm rode to back-to-back wins in the $50,000 Meijer Grand Prix and $25,000 Welcome Stake, presented by East Wind Farms. This time it was fellow Sweet Oak Farm rider, Lorcan Gallagher, who took home the top prize aboard Hunters Conlypso II, owned by the Dacantos Group.

Twenty-five international horses and riders were tested over Mexico’s Manuel Esparza’s first round course, where only 11 were able to produce clear rounds and advance to the jump-off. In addition, both Gallagher and fellow Irishman Conor O’Regan qualified for the tie-breaking round with two mounts.

Gallagher was first to return for the jump-off aboard his other mount Belize D’Ive Z, owned by Sweet Oak Farm, but incurred 4 faults. After Winn Alden (USA) jumped clear with Charlie, owned by Southern Arches, LLC, Gallagher knew he and Hunters Conlypso II would have to jump clear and be fast to win.

Seven rounds later, the competitive pair did just that, crossing the finish line in 47.40 seconds to take over the lead, while Alden would finish in second place in 47.76 seconds.

Rounding out the top three, and the fastest of the 4 faulters, was Sloane Coles (USA) and The Springledge Group’s Esprit in 45.360 seconds.

The second week of GLEF will culminate on Sunday with the week’s highlight event, the $50,000 Grand Prix of Michigan CSI2*, in the Grand Prix Ring at 2 p.m.

On Hunters Conlypso II:
“We call him ‘Hunter’ in the barn. He’s a 9-year-old [Hannoverian gelding]. It’s actually just my third week showing him. He only arrived in the United States at the end of May so he’s relatively new. I wasn’t sure what questions I should ask today but I think he’s got a very bright future. He’s already jumped up to 1.50m level and has nice records so hopefully we can keep going and bring him to the next level. The Dacantos Group own him and I’m very grateful to all of the partners in the syndicate.”

On his jump-off round:
“To be honest, I went first with my other horse and I was quicker. I turned really tight into the in-and-out and just clipped the back bar coming down. I was quite late to go with Hunter and I saw that there weren’t many clear. I knew he was a naturally fast horse. I thought I had blown my chances after not making one inside turn but he covers the ground well and thankfully luck was on my side today.”

On his plans for the summer:
“I’ll finish hopefully with another win in the grand prix on Sunday – that would be nice. Then we go back to Lexington, Kentucky, to Spy Coast Farm, our base, we take a week off and then show for two weeks in Kentucky. Then the week of Pony Finals, the next generation at the barn are hopefully going to keep up the results and win there. That week, I’m actually going to go to the Dublin Horse Show and try to enjoy that.”

Greg Crolick of Greg Crolick Stables, based in Clarkston, Michigan, walked away with the championship tricolor in the Vankampen Ring on Thursday aboard Avanti, owned by Isabella Cukrowski, in the combined Green 3’9″/High Performance Hunter division.

Crolick and the grey Dutch Warmblood finished in fourth place in the division’s first over fences class and won the handy portion of competition on Wednesday with a score of 85.

The pair returned on Thursday to claim a second and third in the final two over fences rounds with scores of 79 and 84, and also won the under saddle to secure the division championship.

Nineteen-year-old Tori Colvin, who was also champion in the Sugar Run Farm High Performance Hunter division during Week One of GLEF, and Kelsey Spence’s Capote finished on top in the Green 3′ Hunter division, presented by Treesdale Farms, in Hunter Ring II.

Colvin piloted the 5-year-old Westphalian gelding to high scores of 85 and 87 in Wednesday’s over fences rounds and grabbed another blue ribbon over fences on Thursday with a score of 86 to clinch the championship.


FROM THE WINNER’S CIRCLE

On Avanti:
“We’ve had him for about four months. He’s a 10-year-old Warmblood. He was doing jumpers over in Europe and then he got imported by a friend of mine and we found him down in Florida. [Avanti] loves the hunters. He’s got a very slow mind frame and really wants to do a good job. He’s much better in the handy, probably from his jumper background. He really likes to turn and look for another [fence]. He’s still trying to figure out the whole straight lines and hunter type of job. He also does the Children’s Hunters with his owner and does a great job with that. You know he can jump a big 3’9″ jump, but he’s really quiet for the child at the same time.”

On Greg Crolick Stables:
“We’ve only been at our barn for about a year now. I’m from Michigan but we opened a new barn a year ago in Clarkston, Michigan, and it’s going wonderfully. We have a great group of wonderful clients and it’s been a lot of fun to meet a lot of new people. We’ve gotten new pony riders and also some professional riders. It’s been wonderful and we’ve had a great time.”

On GLEF:
“We love coming to GLEF. It’s absolutely wonderful. It’s a destination spot, it’s a great resort area and a lot of my clients have second homes up here. It’s a lot of fun for us to come here. We have 24 horses here this week and we’re staying for the whole month of July. We love it, we come every single year.”

On Tori Colvin competing Capote:
“Tori’s such a good rider and she makes him look so good. It makes me really proud watching him because he’s so young. He acts like he’s 10 but really he just turned 5. He’s awesome. We got him from Michael Morrissey and he had [Tori] on him. We did the Kentucky Spring Horse Show and she showed him down there. They work really well together and Tori also helps me a lot as a rider because she knows how he is and she rides him really well.”

On her plan with Capote:
“I competed in the Children’s Hunters with him for my first show. I’m going to do that this week too and hopefully by the end of the year move up to the 3’3″. We think he’s ready, we’re just trying to get used to each other.”

On Capote:
“He’s really talented and tries his best. From the first time I saw him, I knew he was special. Every time you get on him he gets better and better. It doesn’t matter if I leave long or chip, he just has a really good heart and tries really hard. He’s really fun.”

During GLEF’s first “Equitation Tuesday” of the 2017 series, 16-year-old Brooke Giacin rode to the top of the leaderboard in the Taylor Harris Insurance Services National Children’s Medal and the Pessoa/US Hunter Seat Medal, presented by Randolph College, aboard her own Shannaghmore.

Giacin’s win in the Pessoa Hunter Seat Medal also earned her an invitation to this year’s 2017 Dover Saddlery/USEF Hunter Seat Medal Final at the Pennsylvania National Horse Show in October, which will be the junior rider’s first time competing at the prestigious equitation final.

Trained by Tiffany Morrissey of East Wind Farms, the pair also finished second in the ASPCA/NHSAA Maclay Horsemanship class, which was won by Ellyn Fritz and Campari, trained by Erin Herrera.

In the hunter phase of the WIHS Equitation, Adam Edgar won with Blackcomb, while Alexandria Beneson took top honors in the jumper phase with Lolita, both trained by Emily Smith of Ashland Farms. However, it was Edgar who took home the overall top prize after both phases in the WIHS Equitation.

Weeks Three, Five and Six will also feature Equitation Tuesdays. This new addition to the GLEF schedule provides equitation exhibitors the opportunity to collect double the amount of valuable qualifying points per week in one location.

On Shannaghmore:
“[Shannaghmore’s] my buddy. I call him my nugget. I walked out of the ring and [Tiffany Morrissey], my trainer, asked the ingate, ‘Is Brooke in the standby?’ He said no. Then we just decided to wait for the Maclay because we were at the top of the order and at the end of the class they asked, ‘Tiffany, where’s your horse?’ We looked at each other so confused. It was a pretty neat, organized and tidy course. It was one of the few tests I’ve done in the Pessoa. When he said the results I was really shocked I came out in first.”

On GLEF:
“I feel like at GLEF it’s different because it’s more like a horse show vibe versus Wellington. Here I felt like it was the real deal.”

On her plans for qualifying for indoor finals:
“I’m qualified for the Pessoa and I need four more points in the Maclay so we’ll keep going for the Maclay and continue on with the Taylor Harris.”