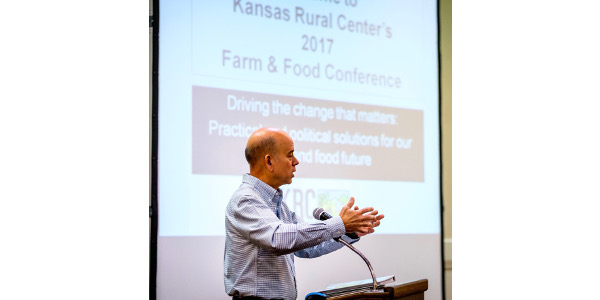 TOPEKA, Kan. — Looking back on four decades of advocating for sustainable agricultural issues and policies, most of it on the federal level, Ferd Hoefner, Senior Strategic Advisor for the National Sustainable Agriculture Coalition (NSAC), has seen his share of gains, losses and missed opportunities. For every notable success, such as the implementation of the Sustainable Agriculture Research and Education program (SARE) in 1988, there was a notable loss.

But it is important to remember, Hoefner stated, that great advances have been made, and that despite continued obstacles to achieving good food and farm policies, a celebration is in order. “This is not the time to abandon the mission of reforming public policy at all levels,” he said, “but rather a time to remain engaged, with even more passion than before.”

Hoefner was a keynote speaker for “Driving the change that matters: Practical and political solutions for our farm and food future,” the Kansas Rural Center’s 2017 Farm and Food Conference, held Nov. 17-18 in Manhattan, Kansas. Nearly 200 farmers, local food advocates, conservationists, and consumers gathered for two days of speakers and workshops, ranging from practical farming and marketing how-to’s to policy analysis and organizing tips, and exhibitors focused on topics ranging from beekeeping to soil health and voting rights.

Hoefner addressed the crowd on the “past, present and future of sustainable agriculture”, having spent the last 40 years addressing federal policies supporting long-term economic and environmental sustainability of agriculture, natural resources and rural communities. Hoefner started on this path in 1977 as a congressional intern working on the Farmer to Consumer Direct Marketing Act and the Urban Gardening Program.

It was a heady time to be working on farm issues. New innovations were being introduced and a new movement was emerging. Even Congress seemed ready to consider the “why”of the farm bill rather than simply tinkering with support programs. Title 1 was not the commodity title as it is now, but the family farm title, specifically stating that federal laws and programs should foster the family farm system of agriculture and that no policies or programs should be enacted or administered in a manner that would place the family farm operation at an unfair economic disadvantage. It also put commodity program payment limits front and center, rather than buried at the end of the commodity title.

Though it proved imperfect in practice, Hoefner said, the bill’s payment limit provision at least attempted to target commodity benefits to moderate-scale agriculture, reducing coverage at the high end to tamp down over-expansion and consolidation.

Following the passage of the 1977 farm bill, the USDA undertook the Structure of Agriculture project and the Organic Farming project, both of which led to two highly important USDA reports, Hoefner said. “A Time to Choose” profiled the federal policy changes needed to save and grow an agriculture backed by mid-size family farms, while the “Report and Recommendations on Organic Agriculture” profiled the potential for widespread adoption of organic farming – a first for a USDA publication.

The euphoria was short-lived. Immediately following the 1980 election and the installation of the new administration, both reports were pulled, publication ceased, and the recommendations left on the cutting room floor.

During and following the farm crisis of the mid-1980’s, many farmers started looking for alternatives to the “get big or get out” concept. They were looking at ways to reduce input costs and rely more on management and on-farm resources, as well as looking for ways to find increased value in the marketplace. Sustainable agricultural societies and grassroots organizations across the Midwest formed to change the direction of federal policy toward a more sustainable vision of agriculture. One of them, the Kansas Rural Center, was a vital contributor to those early organizing efforts, Hoefner said. Another was the Sustainable Agriculture Coalition, now known as the National Sustainable Agriculture Coalition (NSAC), which formed in the late 1980s.

The organization’s goals were simple. “We argued for a seat at the table,” he said. “We warned policymakers to not put all their eggs in one basket. We pleaded that they allow an alternative to have a chance. We argued for a fair share and a fair shake.”

Winning congressional appropriations for the SARE program after it had been shelved for almost a decade was their first mission, and getting it off the ground was their first big win in 1988. Two years later the organization won the full-scale authorization of SARE into the 1990 Farm Bill. Other initiatives followed, including the Organic Agriculture Research and Extension Initiative, the Beginning Farmer and Rancher Development Program, and the Small and Medium-Size Farm Viability Program.

“It was no coincidence that SARE and NSAC got started in the same year,” he said. “The impact of our work to create and fund SARE has been hugely important to the movement. It’s difficult to imagine where we would be in sustainable agriculture both now and in the future were it not for the combined $75 million a year we are pumping into the four programs.”

Support for new and beginning farmers has been a central tenet of the NSAC policy agenda from the 1990 farm bill to the present. “We have consistently kept the issue of the aging of American agriculture in front of Congress and the USDA,” Hoefner said.

Also, with the newfound interest in soil health and cover crops really beginning to take off, Hoefner said, NSAC has been overwhelmed by the interest in a topic they have championed for decades in their conservation policy work. “We are trying to harness that broader support to gain stronger policy and better funding for working lands conservation, and also to better integrate conservation and soil health with the federal crop insurance program.”

During the past decade, marketing issues have accelerated. Legislative wins included the Value-Added Producer Grant Program, the Farmers Market and Local Food Promotion Program, the National Organic Certification Cost Share Program, and others that were combined into the Know Your Farmer, Know Your Food Initiative passed during the Obama Administration.

All of these programs required hard work and dedication to develop, launch and campaign for, Hoefner said. But when it came to tackling the Big Ag programs, whether commodity programs, crop insurance, tax shelters, CAFO regulations, or anti-trust and fair competition policy, the going got a lot tougher.

“Farm policy overall is stacked against diversification and farming in concert with the environment,” he said. “Switching from the production system side of the equation to the structure of agriculture side, we have had nothing if not an agonizing time trying to get Congress and USDA to enact and implement real subsidy payment limitation reform to reduce incentives to over expansion and subsidized farm consolidation. We repeatedly seem to make progress, passing real reform measures on one side of Congress but not the other, or winning small reforms from Congress only to watch USDA undo them in the implementation phase.”

Positive change will come only when we are able to construct a wider coalition of farmers, workers, and consumers who will stand up and fight for a better food policy, building a stronger power base to make fundamental change, he said.

NSAC and its member organizations are now focusing on the 2018 Farm Bill, but Hoefner expects it to be a difficult struggle. “Support for beginning farmers and new farming opportunities in Congress and even among agricultural interest groups is a mile wide and an inch deep,” he said. “But for the sake of the future of a sustainable agriculture based on family farms, we really need to confront the barriers in a more systemic way and try to get support levels to a mile wide and a mile deep. The future of a more sustainable agriculture depends on it.”

Policy, he said, is not the be all and end all, but it can help to move us in the right direction. It’s also important to recognize that legislative successes happened from the grassroots up. “We know that the future of sustainable food systems at home and abroad hinge on how we respond to the challenges of today and prepare for the challenges of tomorrow, which are coming at us fast and furious.

“Sustainable farming tomorrow will not be exactly like that of today. The principles and values may remain constant, but the challenges and opportunities will continue to evolve, and in many respects intensify. That makes fighting the fight for more research dollars in general, and more dollars for sustainability, regeneration and resilience research in particular, more important than ever.”

Hoefner’s and other conference presentations are available on the KRC website at www.kansasruralcenter.org.

Tom Parker is a freelance writer from Blue Rapids, Kansas, who prepared this article for the Kansas Rural Center.

Business wraps up at KFB meeting