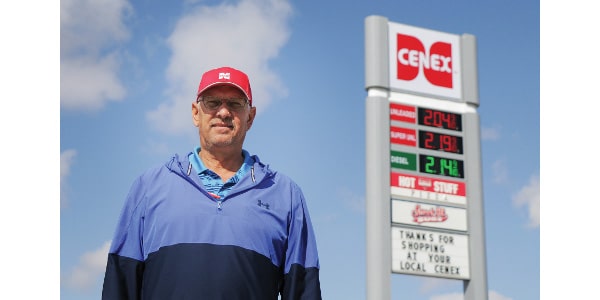 As general manager of Farmers Union Oil Company of Garrison, Paul Schlichting understands what his cooperative means to the community. (Courtesy of NDFU)

JAMESTOWN, N.D. — As general manager of Farmers Union Oil Company of Garrison, Paul Schlichting understands what his cooperative means to the community.

So when Schlichting learned about the CHS grant, “Hometown Pride,” he saw it as an opportunity to do even more for his community. According to the CHS website, the $5,000 grant “highlights what makes the town and community that your c-store supports special.”

Garrison is home to the Dickens Village Festival, a three-week event prior to Christmas that turns the community into a Victorian town, complete with the full décor, horse and carriage rides, and an English double-decker bus.

“I started looking into it, and I thought that this (festival) is really something befitting of this award,” Schlichting said. “There is a lot of pride in this festival, from the businesses to the residents. It’s a pretty big thing for us.”

Schlichting believes he’s just doing his part, but receiving the grant for the community is just another example in a long list of ways he has made a difference. He served as president of the festival for 10 years, even putting dispensers on his back and handing out free hot chocolate on the street, courtesy of Cenex. He has taken a variety of additional roles as a volunteer for the festival, including driving the double-decker bus and playing “Jacob Marley” in the local production of “A Christmas Carol.”

“I never did drama in high school,” he said. “Jacob Marley is my favorite character to play. Not a lot of speaking parts – just walking around in chains.”

Currently, he is president of the local chamber of commerce, and his cooperative spirit plays a huge role in benefitting the community. Garrison is also home to the “ND Governor’s Walleye Cup,” a large fishing tournament typically in July. Schlichting said balancing consumer spending so everyone benefits is key.

“The main street businesses don’t benefit near as much from the walleye tournament as the restaurant and bars do,” he said. “The Dickens festival is another way to make sure that we’re helping each other out. It’s a benefit for everybody. That’s how we make sure we stay in tune with everyone. Garrison didn’t get to where it is today by everyone just taking.”

The Dickens Village Festival is Nov. 27-28, Dec. 4-5 and Dec. 11-12. The town is lit up with the spirit of Christmas every Friday and Saturday for three weeks. Schlichting said guests will enjoy a memorable experience.

“You’ll see kids walking around, begging for coin,” Schlichting said. “Father Christmas will be walking around. People drinking hot chocolate and people eating sausage on a stick. Old-style lamp posts wrapped in garland. Horse and carriage rides up and down the street, which are free thanks to Reservation Telephone (Cooperative). We also have lighted parades each night.”

Schlichting believes co-ops should embrace active roles in the community.

“Co-ops are the most important part of a community, because they’ve often been there the longest,” Schlichting said. “We’ve been here since 1930. We’re a staple of the community, and we need to be that staple.”