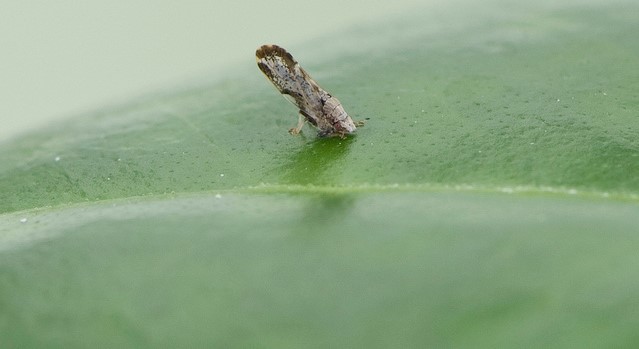 FORT PIERCE, Fla. — Fighting plant disease with jet blast sprays is standard practice for citrus growers. But, to spray a fungus to control a single insect that carries a disease-causing pathogen is uncommon.

University of Florida Institute of Food and Agricultural Sciences and Florida Research Center for Agricultural Sustainability researchers have begun to test an insect-killing fungus applied with horticultural oil sprays in a Vero Beach, Florida, citrus grove. The scientists are targeting an invasive insect, the Asian citrus psyllid, that attacks the state’s $8.63 billion citrus industry.

The fungus, Isaria fumosorosea, occurs naturally in citrus groves. Lance Osborne, a professor of entomology at the UF/IFAS Mid Florida Research and Education Center, first discovered the fungus attacking mealybugs in a greenhouse in the mid-1980s. Cave said the scientists are interested in using the fungus because it kills and changes the feeding behavior of the psyllid that has devastated the state’s signature crop, citrus.

A biological scientist at IRREC, Pasco Avery, tested the fungus against the psyllid under laboratory conditions, using leaf disk bioassays in Petri dishes. Avery has published his laboratory results in the journals Insects, Biocontrol Science and Technology and Florida Entomologist. His findings document the fungus’ promise as an effective biological control agent against the Asian citrus psyllid.

“The fungus is not a panacea, but it is expected to greatly reduce the problem we have in managing the psyllid populations,” said Avery. “The fungus kills the psyllid but is compatible with beneficial insects like lady beetles, lacewings and parasitic wasps, which also control the psyllid.”

Because the psyllid is invasive, its natural enemies are not present in Florida’s groves, and this factor enabled the pest to spread quickly throughout the state’s citrus-producing areas, Avery said. And, there is a need to distribute the fungus in a wide-scale scenario that would treat large areas where the psyllid attacks large tracts of commercial citrus.

Bob Adair, executive director at the Florida Research Center for Agricultural Sustainability in Vero Beach, heard about Avery’s work with the fungus and approached him about using commercial sprayers to distribute the fungus in his groves. Adair often partners with UF/IFAS research professors to conduct agricultural research.

“Five years ago, Avery and I talked about how the fungus may enhance the effectiveness of horticultural oil sprays in controlling the insect in groves,” said Adair. “Our work now is to add mass quantities of the fungus with horticultural oils that have been used in groves for decades and apply it to groves.”

Avery carried out experiments in his laboratory to determine if the oils were compatible with the fungus and published the results in the Insects journal in 2017. He found that the oils sustained the fungus and helped it to grow and thrive, he said.

“What we found in the laboratory was that with the addition of the oils to the fungal suspension, it killed the insects faster and extended its efficacy,” said Avery.

Adair said the next step was to determine its efficacy in field trials in citrus groves. The fungus needs to be tested in outdoor groves to determine whether it can suppress the Asian citrus psyllid population to the point where trees will be protected and that the psyllid will not become resistant to the sprays.

Avery and Adair conducted a first field spray trial in mid-June. About 1 acre of trees was sprayed on one side of the row. The scientists mixed 1 percent of a commercial product containing the fungus, Isaria fumosorosea, with stylet oil for 65 pounds of spray. The spray was applied to the trees at dusk with a pull air blast sprayer hitched to a tractor.

Avery said the fungus was effective in suppressing the psyllid population and that it lasted for up to 14 days after application.

The first field trial was conducted to confirm what the scientists had determined in the laboratory. A second field trial is scheduled for September, to gather more data. For the second field trial, both sides of the trees in the same grove will be sprayed with fungus added to the horticultural oil, said Avery.

“What we found with this first experiment was that the fungus was as effective as the active ingredient of the insecticide spinosad,” said Adair. “We tested the fungus for psyllid control, the effect on beneficial insects and resistance management. Now we need to conduct more tests to determine its effectiveness on a wider scale and time range.”