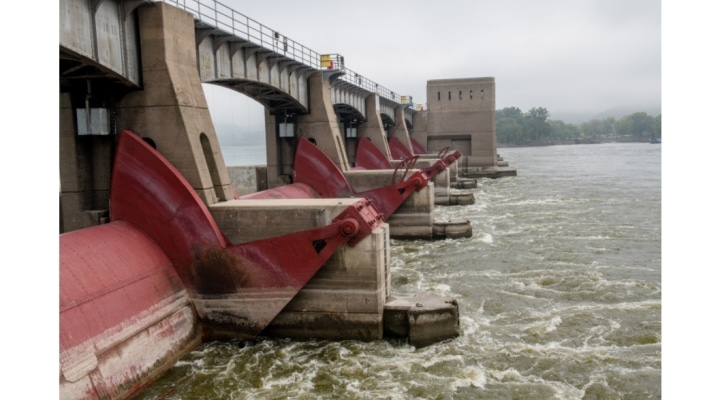 The Army Corps of Engineers budget presented to Congress on Jan. 19 included $2.22 billion in total inland construction on five locks and dams on the Mississippi, Illinois, Ohio and Tennessee rivers. Illinois Corn hopes the allocation of these funds will begin a waterfall of work on the infrastructure on the Illinois and Mississippi rivers. (Joseph L. Murphy/Iowa Soybean Association)

BLOOMINGTON, Ill. — Funding to complete design and construction for Lock 25 near Winfield, Mo., on the Mississippi River is included in the Army Corps of Engineers budget presented to Congress on Jan. 19, 2022, to allocate the funding named in the infrastructure package passed on Nov. 5, 2021. Total allocated funds for Lock 25 are $732 million dollars.

“The IL Corn Growers Association and the diverse partners brought together by Waterways Council Inc. have worked on updating our inland waterways infrastructure for more than two decades. The announcement that we have finally seen allocation of funds to begin construction on Lock 25 on the Mississippi River is the culmination of all our efforts. Our hope is that the allocation of these funds will begin a waterfall of work on the infrastructure on the Illinois and Mississippi River,” said Marty Marr, President of the association and Jacksonville, IL farmer.

Marr also thanked Senator Dick Durbin and Congresswoman Cheri Bustos, as well as other members of the Illinois delegation, for their tireless advocacy to the projects prioritized in the Navigation and Ecosystem Sustainability Project. Lock 25 is the highest priority on this project list. NESP also prioritizes building six additional 1,200-foot locks at the most congested locations, all on the Mississippi and Illinois River.

New 1,200-foot lock chambers will allow a typical tow to traverse the river without breaking into pieces to fit through 600-foot chambers. A new chamber will also create a two-way river, with tows able to use both the 1,200-foot and the 600-foot chamber. Both of these benefits increase efficiency for river users and make the most environmentally friendly commodity transport option even more appealing for businesses and farmers.

A closure of Lock and Dam 25 due to lock age and failure for just one year would result in a loss of more than 7,000 jobs, $1.3 billion of labor income, and approximately $2.4 billion of economic activity to the corn and soybean industry alone. This investment in the infrastructure will avoid losses like these.