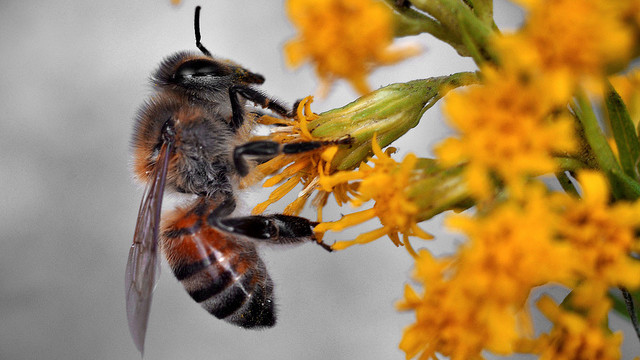 A $1.5 million grant from the U.S. Department of Agriculture will enable a team of researchers — led by Penn State entomologists — to assess foraging patterns of honey bees on organic farms, with an eye toward creating opportunities for beekeepers to produce certified-organic apiary products. (Lucas Zallio, Flickr/Creative Commons)

UNIVERSITY PARK, Pa. — A $1.5 million grant from the U.S. Department of Agriculture will enable a team of researchers — led by Penn State entomologists — to assess foraging patterns of honey bees on organic farms, with an eye toward creating opportunities for beekeepers to produce certified-organic apiary products.

The funding was awarded through the Organic Agriculture Research and Extension Initiative administered by USDA’s National Institute of Food and Agriculture.

In addition to being the most important agricultural pollinators, honey bees generate commercial products, such as honey and wax, that contribute more than $300 million to the U.S. economy annually. But, according to the researchers, beekeepers in the continental United States typically are unable to produce organic apiary products — despite their higher market value — because of difficulties in meeting organic-certification requirements.

“The 3-kilometer zone was established based on maximum foraging distance of honey bees,” she explained. “But our preliminary data and published research indicate that honey bee foraging is context-dependent, and their range can be significantly smaller in smaller colonies and in those surrounded by high-quality landscapes.”

The research team will track honey bee movements by employing automated tag readers and harmonic radar and will decode the bees’ waggle dances, which honey bees perform to communicate the location of food sources to hivemates. These data, the researchers noted, will help them characterize foraging patterns in colonies of different population sizes and located in landscapes with varying characteristics and quality of floral resources.

The researchers also will create high-quality floral maps around the apiaries based on satellite imagery, ground-based observations and pollen metabarcoding — which can identify genetic material from many plants in a single sample using rapid DNA sequencing. This will enable the team to develop a seasonal landscape quality index that can predict the estimated average foraging distances of the colonies in different landscapes.

“Our goal is to assess whether the recommendations for pesticide-free zones can be reduced based on empirical data that incorporates information about landscape quality and colony size,” said Robyn Underwood, Penn State Extension apiculture educator and a member of the research team.

“We’ll receive input from an advisory panel of scientists, beekeepers, farmers and policymakers,” she said, “and extension teams from participating universities will disseminate our results to stakeholder groups and the national organic program.”

Team member Julio Urbina, associate professor of electrical engineering, pointed out that preliminary research to develop the harmonic radar to track the foraging of bees was supported partly by the Institute of Energy and the Environment at Penn State and the Seed ROCKET Program in Penn State’s College of Engineering.

“I am excited to be part of this multidisciplinary project and look forward to working with graduate students and colleagues from multiple departments at Penn State as well as from other institutions,” he said.