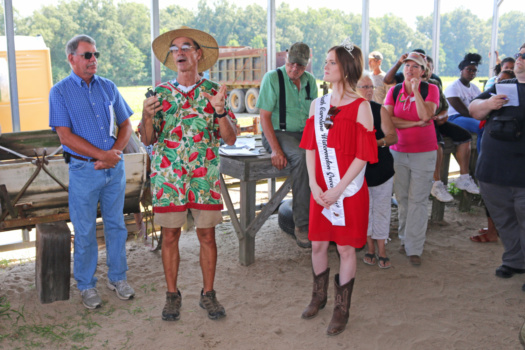 Gilbert Miller, Extension vegetable specialist at the Edisto REC, presented findings at the July 12 event from a clinical trial that showed drinking watermelon puree is as effective as the sports drink in supporting performance with the added advantage of improving antioxidant capacity through increased intake of lycopene and vitamins A and C. (Photo provided by Clemson University Relations)

BLACKVILLE, S.C. — A Clemson University research scientist has taken it upon himself to serve as a “test subject” on the nutritional benefits of watermelon for athletes, and he shared the fruits of his labor at Watermelon Field Day at the Edisto Research and Education Center.

Gilbert Miller, Extension vegetable specialist at the Edisto REC, presented findings at the July 12 event from a clinical trial that showed drinking watermelon puree is as effective as the sports drink in supporting performance with the added advantage of improving antioxidant capacity through increased intake of lycopene and vitamins A and C.

“(Researcher Penelope Perkins-Veazie) took professional bicyclists and they went through strenuous exercise and then gave them placebo sports drinks and watermelon juice,” Miller said. “They did all the blood parameters; checking oxygen regeneration in the bloodstream, recovery, muscle soreness, etc., and lo and behold, found out that the watermelon juice was better in some aspects than sports drinks.”

Miller pureed and froze more than 100 pounds of watermelon from the 2017 crop and has been consuming watermelon before and after workouts as part of his training.

“I’m so glad to get fresh watermelon this year,” he joked. “I’ve been consuming watermelon smoothies throughout the winter and, of course, training rigorously also.”

The results, suffice it to say, have been impressive. Miller qualified for the National Sprint Triathlon competition in August in Omaha, Nebraska, and placed second in the 65-69 age group, qualifying for the World Sprint Triathlon Competition in Gold Coast, Queensland, Australia, Sept 13.

The benefits of drinking watermelon puree for athletes that Miller shared were changes in blood glucose, inflammation, oxidative stress and innate immune measures. They were comparable to the sports drink, while the antioxidants in watermelon (vitamin A, vitamin C and lycopene) augmented the exercise-induced increase in plasma antioxidant capacity, a big advantage over the sports drink, he said.

According to the trial, watermelon also helped assist exercise in lowering blood pressure in the subjects and, related to the decrease in blood pressure, was the release of nitric oxide — a higher amount than was anticipated by the researchers.

Emily Dicks, the 2018 South Carolina Watermelon Queen, said she has worked with the SCWA on the Watermelon Fuels Athletes initiative, spreading the message across the state at such events as competitive races, school functions and visits with college football teams.

“Watermelon truly is so good for you. It’s so hydrating and can be used with your workouts to get the ultimate benefits,” Dicks said.

Dicks grew up in Barnwell in a family of watermelon growers.

“So, this is no secret; this is nothing new to me,” she said. “I believe, first of all, that watermelon is delicious and, second of all, that it’s good for you and that it surely is good for athletes, too.”

Sandy Sanders, a grower from the Olar area, has been to previous Watermelon Field Days at Edisto REC and said he tries to attend whenever possible “to try to find out something new.”

“I’m trying to further my education with it and find out what techniques are better for it to grow, what makes it taste better, what produces better,” Sanders said. “I’m just trying to increase my knowledge of watermelons.”

“It’s always helpful when you come out here you learn a lot more about the fertigation, the pollination, everything — they cover it all,” Sanders added. 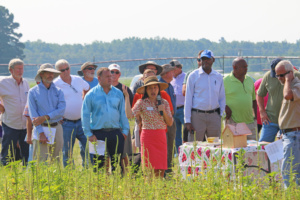 Tsuruda said about one-third of foods that the average person eats benefit somehow by pollination and demonstrated two plots as examples of pollinators.

First, she said buckwheat is a good cover crop for weed prevention and for a nectar resource for bees with a seeding rate of 50-100 pounds per acre at a cost of about 80 cents per pound.

“It can grow under various conditions with limited water, so it’s kind of my go-to for locations where I don’t have irrigation and I need some forage out there but I don’t want to invest in wildflower seeds,” she said.

The other approach that Tsuruda discussed was to plant wildflowers with a mix of annuals and perennials, which she said is significantly more expensive but produces better-tasting honey and is a sound investment for land dedicated to pollinator forage.

“You really need to have irrigation (for wildflowers), especially during establishment,” she said. “If you don’t have irrigation, you might as well just throw your money out in the field.” 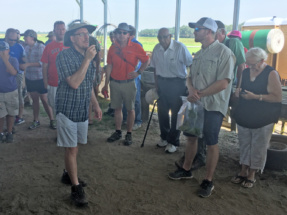 Gummy stem blight is the most common foliar disease on watermelon in South Carolina, according to a watermelon disease survey done in 2015-2017, Keinath said, and is apparent by large lesions of the leaves that usually start at the margin of the leaf at an average size of about three-quarters of an inch in diameter.

“If you have good eyes, you can see the black dots in the middle are the oldest part of the leaf and those are the fruiting bodies of the fungus where the spores are produced that then either a splash or blow to other plants in the field,” Keinath said.

Anthracnose was found in only one of the two spring seasons of the study, meaning it is not necessarily a disease that watermelon growers see every year, but it can be quite destructive, causing more yield loss than gummy stem blight.

“Spots of anthracnose are much smaller than those of gummy stem blight and you need to look for the point or star-shaped spots on the leaf,” Keinath said. “If you see a small, brown spot with points on it, that is anthracnose, or if you see sort of half-inch to inch-long sunken, tan-colored spot on the vines, that is also anthracnose.”

The final watermelon disease Keinath discussed was downy mildew, which he said is a difficult disease to diagnose because, this year, the spots were relatively small — about one- to two-tenths of an inch in diameter — and required a good microscope to see the spores on the bottom of the watermelon plant.