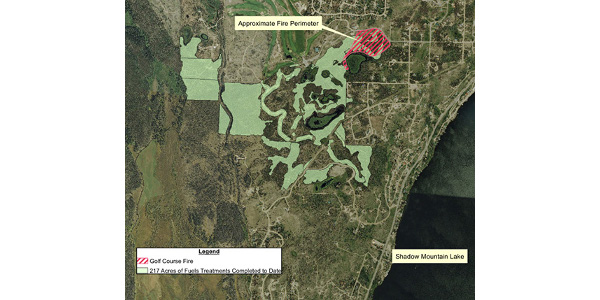 GRANBY, Colo. — The Golf Course Fire, despite causing the evacuation of 300 homes as it burned west of Grand Lake late last week, fortunately did not result in the loss of life or structures. Firefighters and emergency responders ensured that the 20-acre fire was halted and did not damage homes and also made clear that a key reason they were able to protect the community was recent forest management work intended to reduce wildfire risk.

Since 2015, the CSFS and its partners have completed 217 acres of targeted fuels treatments adjacent to subdivisions that were impacted by the fire – which included Columbine, Winding River Ranch and Winding River Villas. Treatments have involved such measures as removing beetle-killed trees and the creation of fuelbreaks to reduce wildfire risk.

The Golf Course Fire is not the only example of recent fuels mitigation work helping to save Colorado communities from 2018 wildfires.

Forest management work near Silverthorne, largely to create a fuelbreak around subdivisions, was attributed by fire managers as a major reason homes did not burn last month during the Buffalo Mountain Fire. Firefighters were able to stop that fire – before it nearly burned into many of the 1,400 evacuated homes – within a fuelbreak that provided a safe and effective location for firefighters to stop its progress. Without the proactive fuels mitigation work, fire managers said, homes there likely would have been lost.

Similar to the work done at Grand Lake, partnerships were key to creating the fuelbreak in which the Buffalo Mountain Fire was stopped. More than a decade of proactive, cross-boundary work adjacent to Silverthorne communities over the past decade was only possible through a partnership between the CSFS, U.S. Forest Service and Summit County.

More information about how to reduce wildfire risk to homes and communities is available from a local CSFS field office or the CSFS Wildfire Mitigation web pages.

Spiders in the garden