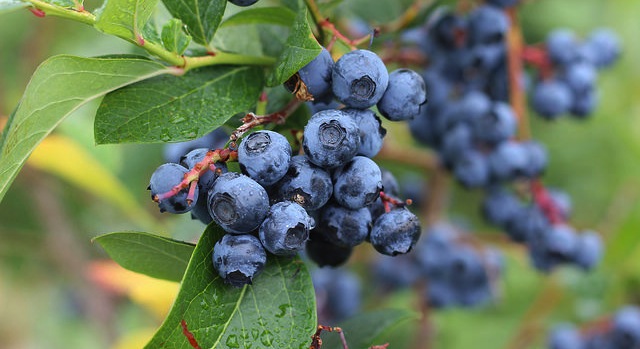 The proposal by Republican U.S. Rep. Bruce Poliquin, who has used Maine blueberries as an example of a frozen food that could help the program, is part of the federal Farm Bill that's wending its way through approvals. Poliquin's proposal also would open up the program to dried and pureed foods. (notjake, Flickr/Creative Commons)

PORTLAND, Maine (AP) — A Maine congressman says he plans to go forward with a proposal to include frozen and canned foods in the Fresh Fruit and Vegetable Program despite criticism from the program’s founder.

The proposal by Republican U.S. Rep. Bruce Poliquin, who has used Maine blueberries as an example of a frozen food that could help the program, is part of the federal Farm Bill that’s wending its way through approvals. Poliquin’s proposal also would open up the program to dried and pureed foods.

The U.S. Department of Agriculture’s Fresh Fruit and Vegetable Program provides money to buy fresh fruits and vegetables for school snacks. The program was initiated by retired Democratic Sen. Tom Harkin of Iowa in 2002, and he has criticized Poliquin’s plan to alter it, including saying, “once you start whittling away at it, it’s no longer a Fresh Fruit and Vegetable program.”

Poliquin said he considers the change “a huge win for our school children” as well as blueberry harvesters in his state, who have contended with low prices, an oversupply of product and volatile harvests in recent years.

“As a parent, I know how important it is for our kids to be able to eat healthy all year round with nutritious products from across the country,” Poliquin said.

Harkin, who retired in 2015 after serving as a senator from Iowa for 30 years and a congressman for 10 before that, said a better solution is to just send fresh blueberries to schoolchildren. He said he’s concerned about added sugars in frozen fruit products.

“People have wanted to include peanuts and trail mix and God knows what else. Now this guy from Maine wants frozen or canned blueberries,” Harkin said.

Poliquin’s proposal has the support of the Wild Blueberry Commission of Maine, which promotes the industry. Maine is the largest blueberry-producing state in the U.S.

The Maine blueberry industry has been looking for new customers to help with flagging prices in recent years. The vast majority of Maine’s crop is frozen, and it would be an ideal product for an expanded Fresh Fruit and Vegetable Program, said Nancy McBrady, executive director of the Wild Blueberry Commission of Maine.

“It shouldn’t be the second choice, it should be up there on equal footing,” she said of frozen fruit.

The Republican-written Farm Bill passed the House Agriculture Committee in April. The current bill that is in place is set to lapse next year. A spokesman for Poliquin said he has not received word on when the new bill will reach its next steps.