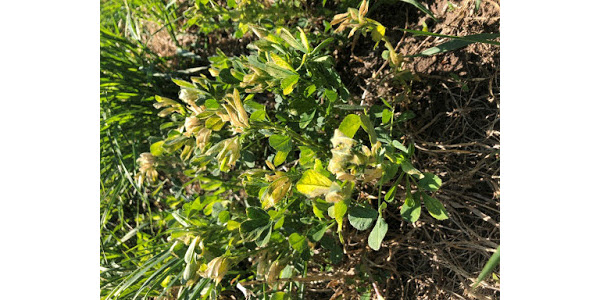 Figure 2. Frosted alfalfa leaves can have a yellow appearance. Note only some of the upper leaves were affected by frost. (Photo: Krishona Martinson)

MINNEAPOLIS — The recent cold weather has caused stress for many emerged crops in Minnesota, including forages. The warm weather earlier this spring allowed many alfalfa stands to produce significant spring growth, with stands in some areas approaching one foot, or more, in height. Some alfalfa fields have experienced frost damage with the recent sub-freezing temperatures, with the greatest potential for frost injury occurring this morning (5/12) (Figure 1).

Alfalfa is relatively tolerant of cold temperatures, especially smaller plants. Most stands should recover just fine with no more than a few frosted leaves (Figure 2).

Alfalfa can generally withstand temperatures down to 24F for several hours without damaging more than the leaves in the mid- to upper-canopy. Temperatures from 25F to 30F may freeze leaves, but will likely not kill the apical meristem (bud) at the top of the plant. The meristem has added protection from the developing leaves surrounding the meristem that provide additional insulation. When temperatures warm up, the surviving meristems should continue normal growth.

Newly-seeded alfalfa has excellent cold tolerance, especially before emergence of the second trifoliate. Cold tolerance diminishes some with older seedlings, but newly seeded stands should survive as long as temperatures do not go below 26F for more than four hours.

Waiting several days is the first step in managing frost-damaged alfalfa. Leaf injury will likely be obvious as soon as temperatures warm up, as affected leaves will begin to wilt and change color. If stems have been damaged, they will also wilt. Stems can appear wilted but straighten up again after several days, which is why it is important to be patient in evaluating the full extent of damage. If stems straighten up again, or if stems were not affected, normal growth should resume with little to no yield penalty.