Home / DelMarVa / Frost seeding
A new user experience is coming! We'll be asking you to login to your Morning Ag Clips account March 1st to access these new features.
We can't wait to share them with you! Read more here. 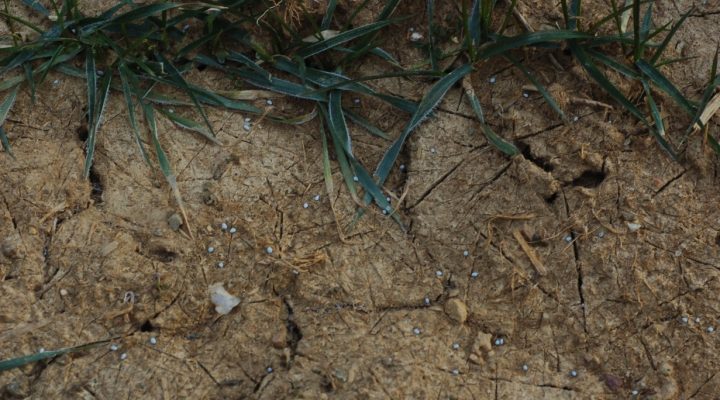 Clover seed on frozen ground. Clover eventually contributes to grass yield in a pasture by fixing nitrogen (if it is at least 30 percent of the stand), and many legumes can help offset the summer slump that grasses experience (as well as boost the nutritional value of the forage). (Courtesy Photo)

RONKS, Pa. — Frost-seeding is one form of over-seeding, in which you can use legumes to economically and quickly thicken a pasture or a perennial hayfield in late winter. Though no-till drilling has more guarantee of success, frost seeding is an easy operation while you have time in the off season, and if managed correctly and timed properly, has good likelihood of success. Spraying, tillage, and lost grazing time does not factor into the costs as it typically does with a pasture reseeding. Clover eventually contributes to grass yield in a pasture by fixing nitrogen (if it is at least 30 percent of the stand), and many legumes can help offset the summer slump that grasses experience (as well as boost the nutritional value of the forage). Red clover has the potential to increase forage yields by 30%, and protein levels by 3-5%. It is more agronomically adaptable, and more palatable as a feed than alfalfa. Plus it’s more reliably a fast starter than alfalfa and germinates more consistently in cool temperatures.

There are two scenarios in which frost-seeding is appropriate:

In either case, you are establishing a crop in an existing crop so you need to make sure:

Alfalfas and grasses are often not as successfully frost-seeded, because the seed is larger and doesn’t work through as easily into the soil surface. If you do use grasses with other species, keep in mind that because of varying size and density, each species will have a different reach when broadcast. Additionally, if you decide to try alfalfa, don’t seed it into existing alfalfa (because of autotoxicity concerns). Grasses that have worked occasionally for frost seeding are the small seeded ryegrass or hulled orchard grass.

Some clover species are also not appropriate for pastures and/or this early-season time frame. Mammoth Red Clover, for example, doesn’t fit in a perennial pasture or hayfield that going to be cut or grazed on a regular basis. If seeded in the fall, Mammoth will give us one big cutting the second year (after it overwinters). If seeded in the spring, it will give us one big cutting later in the season of the first year.

This could potentially be frost seeded for a “one time cut scenario” if it were the only legume seeded in a small grain, where the clover would be harvested after the fall grain harvest. It may also work better planted with spring oats then left to grow after oat grain harvest for one big cut later in the year. But it doesn’t fit in well with other perennial clovers and grasses that are getting grazed or cut on approximately a 25-30 day basis.

Crimson clover is also not as suitable, as it is a winter annual (not a perennial for multiple cuts or grazings) and does best when fall planted and vernalized. (The seed is also too large for optimal frost seeding.)

In the small grain scenario, a few weeks after grain harvest, the clover hay can be cut as “stubble hay,” incorporating some of the small grain straw to add effective fiber to the rich clover. Alternatively, the clover can be left as a cover crop over the summer for nitrogen credits and sprayed or plowed under for a late summer planting, or left over winter for a spring planting the following year.

Keep in mind –if you are frost-seeding solely because of poor grass or legume growth, you will need to determine why this is happening before putting down more seeds. Test for soil nutrient deficiencies and pH, since these will need to be corrected before any seeding can have success.