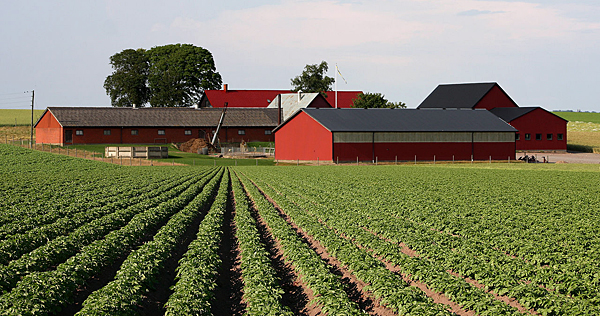 Organizations, such as 4-H, work to develop children's interest in agriculture through hands-on learning activities. But, in modern times, the education goes beyond traditional projects involving livestock and produce to include science and technology. (Wikimedia Commons)

Planting crops with his hands, eating meals with his family, trying new growing techniques, watching his children learn from the land, figuring out ways to meet customers’ needs, dealing with economic issues, feeling the warmth of the sun and the pounding of the rain.

And that is a life Farabaugh lives every moment when he is on his property.

Blue Goose Farm, located in Nicktown, is a community-supported agriculture initiative in which each member pays a flat fee at the beginning of the year and then receives a box of produce once a week throughout the growing season. The operation has expanded from 123 members in 2008 to more than 300.

Farabaugh and his family members plant, harvest and box the crops — from basil to tomatoes, garlic scapes to strawberries, Swiss chard to squash.

“We have to fill up 300 boxes every week — rain, shine, whether it’s 95 or raining and miserable,” Farabaugh said. “That’s the part that I really like. It helps me control costs, understanding my marketing.”

Farabaugh talks with pride about being involved in the entire process of growing food — from putting a seed into the soil and tending to a plant until a healthy, nutritious vegetable is placed in a box and shipped.

Similarly, Tommy Nagle Jr., the owner of a cattle farm in St. Augustine, near Patton in northern Cambria County, feels a “sense of accomplishment” when he sees a “calf being born, and watching how that calf grows up to slaughter weight.”

Nagle, who started farming full time in 2010, referred to his chosen profession as a “lifestyle” and “not really an occupation.”

Both face uncertainties as farmers, ranging from the weather to the impact of global trade issues on the industry, which the Cambria County Farm Bureau — with about 800 members, according to Nagle, the organization’s president — works to address by providing a way to access local, state and federal legislators.

“Those are the unforeseen circumstances and somewhat out of your control,” Nagle said. “But we can combat those kind of things by being involved with Farm Bureau. With Farm Bureau, that is our gateway to our legislators. The only way you can talk to your legislators is through an organization like Farm Bureau that you have the reputation and they listen.”

‘Learn how to work’

Farabaugh hopes his children develop an interest in keeping the land and farming.

But he does not plan to force the lifestyle on them.

“I want them to learn how to work, is what I want,” Farabaugh said. “If you know how to work, and can work with other people and work with your hands, you’ll never be broke. An employer, if he can find somebody who can work, he’ll find a spot for him and he’ll teach him what he wants them to know.

“That’s all I want. And, if they want to stay, OK. But I just want them to be functioning adults. That’s all. I don’t want to push anything on them. There are seven of them. Hopefully I can get one of the seven to stay.”

Fewer and fewer individuals are making careers out of farming — a trend that has been occurring for decades.

Blue Goose was one of Cambria County’s 551 farms in 2012, the year of the most recent federal Census of Agriculture. That census also listed 1,140 and 1,210 farms, respectively, in Somerset and Bedford counties. The farms in those three counties together covered about a half-million acres.

The three counties sold products with a market value of more than $250 million.

While the market value increased from the previous census in 2007, the number of farms decreased by 16 percent in Cambria County and 1 percent in Somerset, with Bedford seeing a 3 percent increase.

“I think as society evolves and becomes less involved with agriculture, they kind of lose the concept of what it takes to actually produce food in America,” Nagle said.

Organizations, such as 4-H, work to develop children’s interest in agriculture through hands-on learning activities. But, in modern times, the education goes beyond traditional projects involving livestock and produce to include science and technology.

“When people think about 4-H, they think about animals and agriculture,” said Capri Stiles-Mikesell, a biosecurity educator for the organization’s western region of Pennsylvania. “Agriculture is the largest industry in the state. And science and technology, engineering and math are all fully embedded in agriculture.”

Stiles-Mikesell said those skills can then be used in many occupations, including farming, veterinary science and agro-business, where the children can grow up to make positive impacts.

“The biggest strength of 4-H is we help them build that network within their community,” Stiles-Mikesell said. “Then, with social media and things today, that network grows into what our pledge actually is. The pledge that the kids have is ‘our club, our community, our country and our world.’ We support that.”

Nagle and Farabaugh are involved in what is considered traditional agriculture — livestock and produce.

But specialty businesses — including honey, maple syrup and wine — have been developing locally in recent years.

Andy Golden, along with his father, Vincent Golden, recently opened Appalachian Malting in Portage Township, where they grow organic barley, rye, wheat, spelt, buckwheat, malt and then sell the grains to breweries and distilleries. They already have customers from New York to Louisiana, including Stone Bridge Brewing in downtown Johnstown and Coal Country Brewing in Ebensburg.

“It’s cool to be part of the process,” Andy Golden said. “I like enjoying the fruits of my labor, too.

“I think it’s really neat to say that this is what beer, this is what whiskey tastes like, that was actually grown in Pennsylvania. Or, if you want to bring it down to a smaller scale, this is what it tastes like when it’s grown, malted in Cambria County.”

Golden sees his company’s emergence as part of a local resurgence in the taste for craft beers — and locally sourced food.

“I think, now more so than any time I’ve experienced in my life, people are really starting to care about where their food is coming from,” Golden said. “We’re basically that last link that ties the supply chain to the crop in the ground. We basically complete the story from growing the grain, to malting it, to getting it to the guys down in Johnstown at Stone Bridge, to them brewing it and serving it on their table there.”

In 2017, John “T.J.” Jackson, a longtime Ligonier resident, moved to Pittsburgh and started Real Fungi LLC. The company supplies hand-picked wild mushrooms to about three dozen businesses in western Pennsylvania, including Myriam’s Table in Ligonier, Out of the Fire Café in Donegal, Westmoreland Country Club and Oakmont Country Club.

“I kinda saw the demand there for local wild mushrooms at the restaurant level and even at the grocery stores and retail level,” said Jackson, a licensed forager. “I just decided to go all in and see what I could do with it.

“I started the business in November of last year and it’s really taken off.”

Allan Savory to speak in Ephrata on Sept. 19