Home » From Romania to Canada & Germany, new UF scientist will use AI to help plant breeding 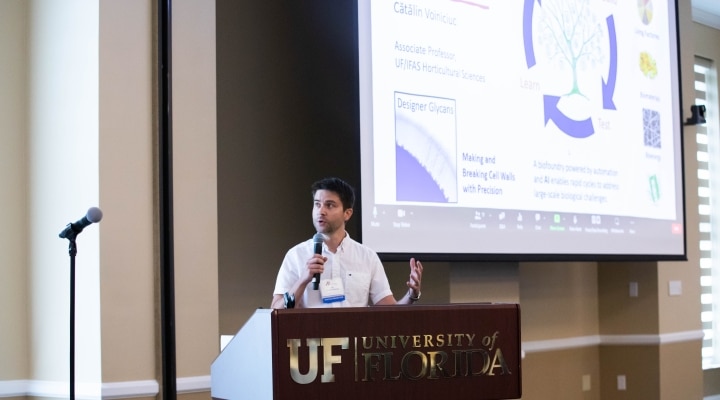 “While enjoying many aspects of farm life — from the vineyard to the vegetable garden — little did I know back then that one day I would become a plant biologist,” Voiniciuc said. “Nevertheless, living on a farm provided a great opportunity to explore the natural world and to develop a strong appreciation of our food supply.”

When he was not out in the countryside, he enjoyed reading science-fiction books and participating in extracurriculars such as painting, chess and sports in school.

As with many children, Voiniciuc’s parents influenced his path.

“Since both of my parents worked as engineers, I was introduced to computers through their work and loved to tinker with whatever technology I could get my hands on,” he said. “As electronics quickly became smaller and more powerful, I realized that the new tools and computing power would enable a wide range of new applications.”

Eventually, he emigrated with his family from Romania to Canada, where he went to secondary school. When he arrived in Vancouver, British Columbia, he knew only a few English words, but he immersed himself in the new language and became proficient.

Voiniciuc’s interest in artificial intelligence began during his undergraduate days in college, when he started using computational tools to mine and interpret publicly available biological datasets.

He went on to earn a bachelor of science degree and a master’s in plant molecular genetics, both from the University of British Columbia and later a Ph.D. in plant biology from the Rheinisch-Westfälische Technische Hochschule Aachen University in Germany.

Now, after several years as a post-doctoral researcher and then later as a research group leader – all in Germany — Voiniciuc has joined UF/IFAS as an associate professor of horticultural sciences.

His primary goal at UF/IFAS is to learn how plants make and remodel their cell walls. Voiniciuc specifically works on the genetic control of glycans – also known as polysaccharides. Indeed, he calls his research team the “Designer Glycans.”

Glycans modulate many aspects of life on Earth. For example, they can determine if the surface of the coronavirus can evade detection by the human immune system.

Within five to 10 years, Voiniciuc anticipates carbohydrate-related genes could be engineered or edited to improve the nutritional profiles of valuable crops and the stress or mechanical resistance of fruits and vegetables.

“Using synthetic biology approaches, we can uncover molecular secrets about quintessential aspects of plant life, while also engineering plant-based biomaterials as sustainable solutions for future generations,” he said. “I also want to contribute to Extension activities by sharing the wonders of plant genetics and synthetic biology with K-12 students.”

“Over time, I also want to build strategic partnerships within the American biotechnology industry, the plant-breeding community, Florida farmers and consumers who could ultimately benefit from advances in plant synthetic biology,” Voiniciuc said.