Home » From process to pint glass 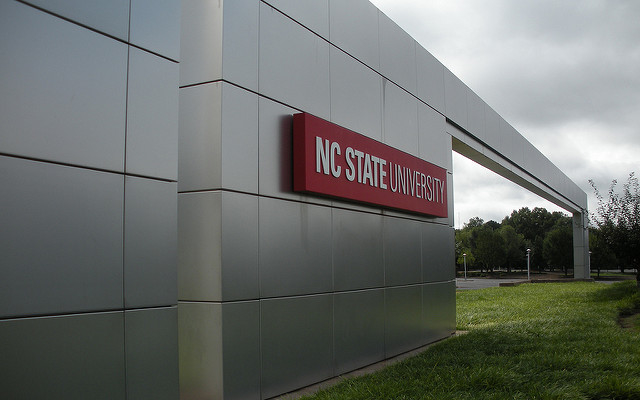 There’s something brewing in the basement of Schaub Hall. The hoppy aroma can be traced to the NC State Brewing Lab, led by NC State bioprocessing professor John Sheppard, which churns out more than 50 barrels of carefully crafted beer annually. (photo by Suzie Tremmel, creative commons.flickr.com)

RALEIGH, N.C.–There’s something brewing in the basement of Schaub Hall. The hoppy aroma can be traced to the NC State Brewing Lab, led by NC State bioprocessing professor John Sheppard, which churns out more than 50 barrels of carefully crafted beer annually.

Those barrels, though, are only a small part of the value offered to N.C. brewers by the froth-filled lab.

“The brewing process is the oldest bioprocess there is – it’s engineering and biology working together. You can’t have one without the other,” Sheppard said. “For example, you can have a beer that’s been flavored with all kinds of ingredients, but is no good because it’s flat. That’s where testing and analytics can help ensure quality control.”With more than 260 craft breweries and brewpubs serving up pints across the state, not to mention the beer enthusiasts dabbling in their home kitchens, the brewing industry in North Carolina is humming. But, as Sheppard will tell you, beer only gets better as brewers perfect the process and find consistency.

Sheppard and his team are currently working on a testing and analytical service for craft breweries that they hope to roll out in the next year. Through NC State Extension, Sheppard hopes to work with N.C. brewers to ensure consistency and quality throughout the production process.

“The testing we do is a standard beer quality control test, which looks at ethanol, bitterness, color, yeast purity and other factors. We’ll also be able to offer more detailed analysis that looks at potential contamination and consistency issues, which will be especially helpful for brewers expanding their production or starting to distribute for the first time,” he said.

Experienced brewers aren’t the only potential partners for Sheppard – undergraduates and other beginners may soon be able to take courses in the brewing process.

“Education is a big part of what we want to do in the next year – both here on campus and for the community. We’re working on a new introductory brewing science lecture course for next spring, and a short, hands-on course that would be open to the public next summer,” said Sheppard.

“This is a great service for the local brewing community – this is university technology entering the marketplace,” Sheppard said. “The products that other breweries are making with the yeast have been successful – some are even doubling their output to keep up with demand.”All of the beer made in Schaub is sold at on-campus events or at the Lonnie Poole Golf Course and the Stateview Hotel. The brewery makes several year-round and seasonal beers, including Chancellor’s Choice IPA, Brickyard Red and Wolfpack Pilsner. They also make a new sour that uses yeast strains harvested from wasps. NC State submitted a patent for the yeast strains in 2016, and Sheppard works with a few breweries across the state that are using the yeast to make their own beers, including Deep River Brewing Co.’s “Limoncello.”

If that makes your mouth water, Sheppard said the brewing lab has plans to expand production and distribution in the next year.

“We’re excited about potential expansion in the next year – right now, we’re making just enough to meet current demand with a fully manual process. If we’re able to get a larger, more automated system, we’ll be able to increase our overall capacity and make this a sustainable project for the future. The interest is there; it’s such a dynamic industry, and we’re excited for growth.”

If the plan to expand goes forward, Sheppard said the brewery could double its capacity by the end of 2018. And, while Sheppard admits his bias, he said the care he and his team take in crafting the beer makes it worth a try.

“You may start seeing some of our beer on tap at more places around town. We’ve had the luxury of developing it slowly, and we make sure everything is all-natural and consistent every time. It’s just good beer, in my opinion.”’