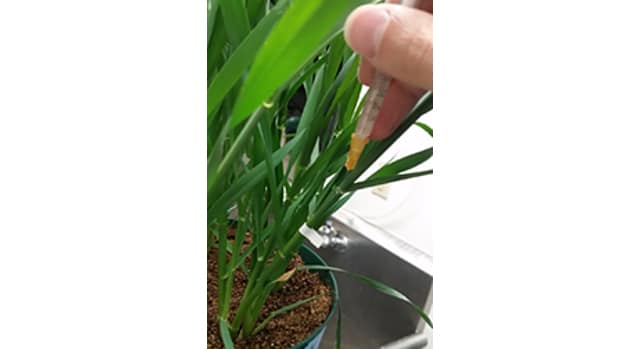 A beneficial fungal "tenant" of wheat plants could help protect them from another fungus that causes scab disease and other harm. (USDA ARS)

PEORIA, Ill. — A fungal tenant of sorts that lives inside wheat plants could get its chance to “pay it forward” in the fight against fusarium head blight (a.k.a. scab), a costly disease of cereal crops worldwide.

Scientists with the Agricultural Research Service (ARS) in Peoria, Illinois, are studying the fungal tenant for its potential to biologically control Fusarium graminearum, a harmful fungus that causes scab in not only wheat, but also barley, oats and other grain-producing crops.

Scab wreaks its costly havoc on two fronts: through reductions in grain yield and quality, which can fetch a lower selling price, as well as the fungus’s contamination of affected grains with vomitoxins, which can be harmful to humans and livestock. In fact, wheat with vomitoxin levels above one milligram is unacceptable for human consumption.

Since varieties with complete resistance to scab have not been found, farmers use various approaches including partially scab-resistant varieties, fungicides, and other measures that can keep the disease at bay. However, each has drawbacks. For example, tillage methods used to disrupt the scab disease cycle can raise the risk of soil erosion.

To provide wheat growers with more eco-friendly options to choose from, a team with the ARS Mycotoxin Prevention and Applied Microbiology Research Unit in Peoria focused their attention on the tenant fungus Sarocladium zeae. The fungus is properly known as an “endophyte” because it spends part of its life cycle among the tissues and organs of wheat and certain other host plants in a symbiotic relationship with them. The endophyte isn’t a danger to its host, but it can be to rival microbes like the scab fungus, which resides in many of the same parts of the wheat plant, including its grain-bearing structures.

In fact, when applied to the soils, stem or seed of wheat plants in growth chamber studies, the endophyte went from benign tenant to aggressive bodyguard when the scab fungus was introduced. One particularly robust strain, S. zeae NRRL 34560, curbed the spread and disease severity of scab by nearly 58 percent, and reduced production of vomitoxin in grain by 61 percent.

In addition to getting a head start on colonizing the wheat plant, the endophyte may also be secreting powerful antifungal compounds as well as helping prime the plant’s own defenses against scab. The team reports these and other details in the October 2020 issue of Biological Control.

For future research, the team will continue evaluating the potential of endophyte seed treatments in both greenhouse trials and field tests using a variety of susceptible and resistant wheat varieties.