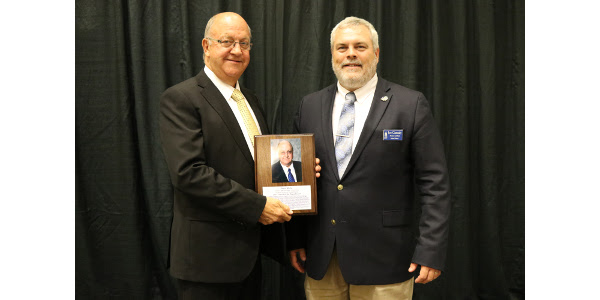 Muller is a graduate of SDSU with a degree in Agricultural Education. During his time at SDSU he was a four-year participant in Little International, the largest student-run livestock exposition in the United States. He later returned to judge the Little International swine competition and served as Master of Ceremonies for the event in 2012. Three of Muller’s children and two of their spouses have attended SDSU.

“Glenn Muller’s leadership throughout the livestock industry in support of the Department of Animal Science has been critical to our success,” explains Joe Cassady, SDSU Animal Science Department Head. “The faculty could not have selected a more deserving individual for this recognition.”

Muller’s experiences in agriculture include teaching agriculture and serving as FFA advisor at West Lyon Community School in northwest Iowa, as well as teaching Adult Farm/Ranch Management at Southeast Technical Institute in Sioux Falls. He has worked in the agriculture division of First American Bank and was employed in risk management of the swine procurement department of John Morrell and Co.

Muller served as President of the South Dakota Pork Producers Council in the early 1990s. He was invaluable in helping SDSU develop an extension swine program relevant to the needs of South Dakota’s pork producers. During his tenure at John Morrell, he was instrumental in the company’s accommodation of SDSU judging teams and helped welcome SDSU Animal Science classes both for educational opportunities within the plant and tours of the facility. He was a strong supporter of John Morrell’s contribution to SDSU’s Pork Classic basketball game, which raises $10,000 annually in support of Animal Science scholarships. He also instigated a program to provide $2,000 annually to both the SDSU Livestock Judging Team and the SDSU Swine Club.

“Glenn has been a tremendous leader for all of agriculture,” Cassady relates. “He has assisted the SDSU Animal Science Department in multiple ways for more than 25 years, including supporting fundraising and legislative efforts that led to construction of our new SDSU Swine Education and Research Facility.” Muller’s efforts with the state legislature were essential in helping the project win both approval and $2 million in state support. Muller’s relationship with the Minnesota and Iowa pork councils helped gain additional support and substantial contributions to the building project.

Cassady says, “Many of the donors’ gifts to the Swine Education and Research Facility project were a direct result of Glenn’s hard work. With his leadership the South Dakota Pork Producers Council voted to provide $25,000 for a Master’s Degree assistantship to support an assistant manager at the new facility. The assistant manager position is critical to successful operation of the facility.”

Muller has also been supportive of both SDSU research and protecting the health of South Dakota’s livestock industry. He was one of four leaders who worked diligently to obtain funding for renovation of the South Dakota Animal Disease Research and Diagnostic Laboratory (ADRDL). “It was Glenn’s contacts and the respect people have for him as a leader that helped propel the approval for the renovation,” Cassady notes. Muller served as a speaker for the ADRDL groundbreaking on August 31.

To learn more about the SDSU Department of Animal Science, contact Cassady at Joseph.Cassady@sdstate.edu.