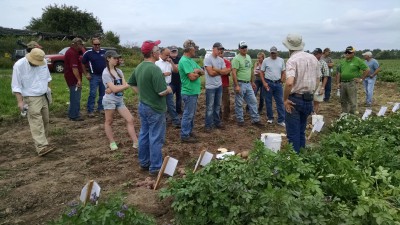 EAST LANSING, Mich. — In 2016, the Michigan Potato Industry Commission, Michigan State University potato specialist Chris Long and MSU Extension Presque Isle County partnered once again to conduct a table-stock potato variety trial. The trial was hosted by Wilk Farms near Metz, Michigan, and showcased 54 different varieties of russet, red, yellow, round white and novelty types. Varieties were planted in single, un-replicated rows, 50 feet in length on May 24. The field was not fumigated and tubers were planted 10 inches apart. Starter and sidedress fertilizer were applied by the grower at recommended rates according to soil analysis and best practices for the adjacent commercial field.

This year’s growing season featured warmer than average temperatures and below normal precipitation. Temperatures were 3 degrees Fahrenheit warmer than average for the month of July, and 6 F above average through August and September. Rainfall was nearly 4 inches below normal for the growing season, but our variety plot was under irrigation, which supplied approximately 6 inches of water total in 10 applications. Vines were killed Sept. 15, and the plot was harvested Oct. 10. Common scab pressure was low across varieties this year, with the worst rated variety being only 1.5 out of 5. Other disease symptoms and physiological disorders were also relatively limited.

Of russet types, the Dakota Russet was the top yielding, producing 592 hundredweight (cwt) per acre, 523 cwt of which made U.S. #1 tubers. Sixty-eight percent of this variety was grade A tubers, with 5 percent grade B, 20 percent oversize and 7 percent pickout. Dakota Russet did, however, have a common scab rating at 1.0, and exhibited some symptoms of alligator hide. Line W9433-1Rus, Mountain Gem, Caribou and line Tx08352-5Rus were also high yielding russets, all producing over 450 cwt per acre of U.S. #1 tubers (over 550 cwt total) with scab ratings less than 0.50 and no physiological defects.

In the red skin type potatoes, Red La Soda 10-3 was the top yielding line. Approximately 569 cwt per acre of U.S. #1 tubers were harvested out of the total 590 cwt yield. Fifty-six percent of Red La Soda 10-3 tubers were grade A, while 2 percent made grade B and 39 percent were oversized. Narrower tuber spacing at planting for this variety would be recommended to help reduce the number of oversized tubers. The other top yielding red skin varieties were NY 159, ND7132-1R, NorDonna and the original Red La Soda line. Each of these top five yielding varieties produced over 478 cwt per acre of U.S. #1 tubers (over 513 cwt total), and had a common scab rating of 0. It should be noted, however, that the ND7132-1R line and the NorDonna variety both had a problem with sticky stolons in this trial.

Of the yellow skin types, Lehigh was the top performer. Approximately 569 cwt per acre made U.S. #1 tubers out of the total 590 cwt per acre harvested. Forty-seven percent of the harvested tubers were grade A and 2 percent grade B, but the other 49 percent were oversized. Again, narrower seed spacing would be recommended when planting this variety. Other top performing yellow skin varieties were Santina, Soraya, Alegria and the NYL30-5 line. All of these verities produced over 487 cwt per acre of U.S. #1 tubers (over 558 cwt total). Soraya and Alegria had the best scab ratings of the top five yielding varieties at 0 and 0.5, respectively. All others in the top five had a scab rating of 1.0.

Lastly, of the two round white types, line MSV179 out-performed the Reba variety, yielding 569 cwt per acre of U.S. #1 tubers out of the total 579 cwt per acre harvested. Both varieties yielded over 540 cwt per acre, but both also had over 50 percent of tubers oversized. MSV179-1 and Reba had good common scab ratings at 0 and 0.5, respectively.

MSU Extension Presque Isle County thanks the Michigan Potato Industry Commission and Chris Long for the continued work they do to provide northeast Michigan potato growers with variety information to help in future decision-making.