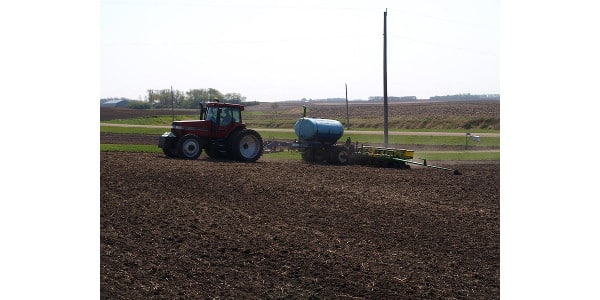 In a rare move, the National Oceanic and Atmospheric Administration's Climate Prediction Center on April 8 reported a greater than 90% certainty that Missouri and most of the central United States would experience below-normal temperatures April 13-17. (minnemom via Flickr)

Newly planted seeds suffer when cold spells hit during imbibition, which is the process of the seed absorbing water to begin germination. The first water the seed takes in, or imbibes, is most important, Luce said. A chilling effect occurs when the seed takes in water colder than 50 degrees during the first 24 to 48 hours after planting.

This can cause cells to leak and not reorganize properly during rehydration. It results in loss of seed vigor or death. Seeds tolerate cold better after germination. “So, seed planted ahead of the cold spell that is already germinated will tolerate the cold temperatures much better,” Luce said.

Plant according to soil conditions, not calendar

MU Extension soybean specialist Bill Wiebold halted planting of test plots at the MU Bradford Research Center in Columbia when he heard the prediction. “It’s too much of a risk to plant today,” he said.

Wiebold’s six-year research on planting dates shows corn yields begin dropping in May, still leaving plenty of time for farmers to plant and expect good yields. “Our data provide some optimism that reasonably high yield can be obtained when corn is planted in mid-to-late May,” Wiebold said.

“However, yield potential is very strongly dependent on weather conditions in late June to early August far more than planting date,” he added. “For this reason, it is difficult to predict in any specific year what will happen to corn yield if planting is delayed.”

Soil conditions, rather than the calendar, dictate when to plant. Planting date concerns may rush farmers to get in the fields when soils are too wet or cold.

In a rare move, the National Oceanic and Atmospheric Administration’s Climate Prediction Center on April 8 reported a greater than 90% certainty that Missouri and most of the central United States would experience below-normal temperatures April 13-17.

March ended as the ninth-wettest month on record, and May—normally Missouri’s wettest month—lies ahead. In addition to low temperatures in mid-April, NOAA anticipates near- to below-normal precipitation in Missouri.

Extremely wet soil conditions this past winter laid the groundwork for another troubled growing season in the agricultural world, Guinan said.

This was the third consecutive wet winter in Missouri, he said. It also ranked as the 19th-wettest winter in the National Weather Service’s 125 years of records.

“Unusually wet conditions have prevailed since the beginning of 2019, with 11 of 15 months recording above-average precipitation,” said Guinan.

Missouri kicked off 2020 with high soil moisture levels across a large portion of the Mississippi and Missouri river basins.

Safeguard your ranch with the right bulls

California could cut off water from thousands of farmers
July 25, 2021