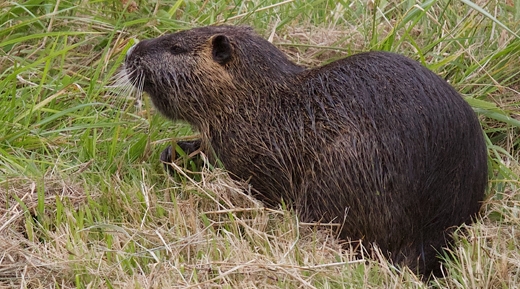 Nutria, native to South America, have been found in Central California near permanent water sources, such as rivers, streams, lakes, ponds and wetlands. (Courtesy Photo)

DAVIS, Calif. — When insects, animals, weeds and disease-causing microbes make their way into California from other parts of the nation or the world, the economic and environmental impacts can be catastrophic.

A recent UN report that details the world’s biodiversity crisis assigns part of the blame to the proliferation of invasive alien species. “The numbers,” the report says, “have risen by about 70%, across the 21 countries with detailed records” since the 1970s.

During the first part of the week, the series covers a range of organisms, from killer algae and incestuous beetles to rodents of unusual size. Later in the week, it’s Weeds-A-Palooza, with talks focusing on invasive plants.

The webinars will be offered using Zoom Video Communications from 12:10 to 12:50 p.m June 3-7. All details are available online at https://ucanr.edu/sites/invasivelunch/invasivelunch2019/. Links to the Zoom meeting space will be posted on that webpage before the webinars begin.

Monday, June 3: “How they get here: Aquatic invasive species being moved around the world”

Sabrina Drill, UCCE natural resources advisor, and Edwin Grosholz, Department of Environmental Science and Policy, UC Davis
Most people only hear about an invasive species when they are here causing problems. But preventing new invasive species from getting here in the first place requires understanding the “pathways” of introduction. From tsunamis to aquariums, container ships to canoes, Grosholz and Drill will discuss ways that freshwater and marine organisms travel to California, and how we can prevent spreading them once they arrive.

Beatriz Nobua-Behrmann, urban forestry and natural resources advisor, UC Cooperative Extension in Orange County
Tree pests come to Golden State from around the world and threaten street trees, agriculture, and natural areas. Last year the legislature in Sacramento allocated $5 million to begin addressing the latest threat – shot hole borers that kill a wide variety of trees in Southern California. Nobua-Behrmann will describe how these insects damage trees and what we can do about it.

Wednesday, June 5: “Rodents of unusual size: Nutria in the Delta”

Valerie Cook-Fletcher, Nutria Eradication Incident Commander, California Department of Fish and Wildlife
Nutria, a South American rodent, have caused extensive damage in Louisiana wetlands for decades. Now nutria have been found in the Sacramento-San Joaquin River Delta and its tributaries and state agencies are working to find them before they can breed and spread. Cook-Fletcher will provide an update on efforts to locate this elusive swimmer in the maze of sloughs and backwaters of California’s San Joaquin Valley.

Mike Anciaux and Bob Simmons, Walnut Creek Watershed Council
Giant reed (Arundo donax) is one of the most damaging wildland weeds in California. More than $20 million was spent to remove it from the Santa Ana River watershed in Southern California to protect the endangered Least Bell’s Vireo, a songbird that nests in native streamside vegetation. On the eastern side of San Francisco Bay, citizens are uniting to find and remove hundreds of populations along Contra Costa County’s creeks.

Eric Wrubel, San Francisco Bay Area Network, National Park Service
Invasive knotweed species are some of the worst weeds in the world. They have become notorious for destroying property values in Europe. Knotweed is extremely difficult to get rid of because its underground rhizomes store energy and resist herbicides. Wrubel will describe the partnership that has formed to eradicate recently found invasive knotweed in the San Geronimo Valley and Lagunitas Creek watersheds in Marin County before it can spread.