Home / Missouri / Free SCN tests available to farmers
A new user experience is coming! We'll be asking you to login to your Morning Ag Clips account March 1st to access these new features.
We can't wait to share them with you! Read more here. 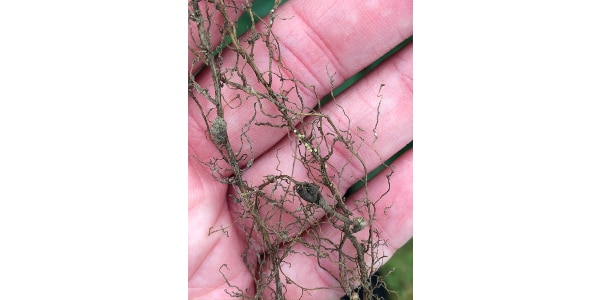 Soybean cyst nematode on roots of a soybean plant. United Soybean Board checkoff program dollars fund up to two free tests for Missouri farmers as part of efforts to raise SCN awareness in the state. (Photo courtesy of Kaitlyn Bissonnette)

Testing soil before planting soybean is vital, says MU Extension plant pathologist Kaitlyn Bissonnette. SCN is the No. 1 soybean disease in the U.S. and Canada, with yield losses up to 30% per infected acre. Symptoms include stunted growth and yellowing, but yield loss can happen even when there are no visible symptoms, Bissonnette says.

Sample every three to five years, she says. Bissonnette gives instructions on how to sample at ipm.missouri.edu/IPCM/2021/4/scnSampling-KB.

SCN quickly began spreading through Missouri in the 1970s and gained a foothold in most of the state’s soybean-growing counties by the 1990s. SCN is easily transported in soil; cysts and eggs spread via equipment, water or wind.

United Soybean Board checkoff dollars fund up to two free tests for Missouri farmers as part of SCN Coalition efforts to raise awareness of SCN. The SCN Coalition is a public-private partnership of university researchers, extension specialists and industry representatives.

NCBA members put "Boots On The Hill" during 2021 Legislative Conference