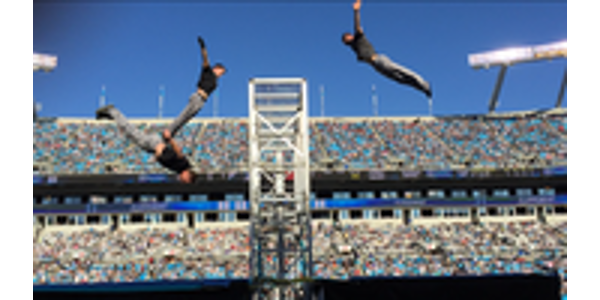 The biggest and most thrilling piece of entertainment coming to the Fair this year is Flippenout's Extreme Trampoline Show, performing three shows daily, west of the Agriculture Building. (Courtesy of Missouri Department of Agriculture)

SEDALIA, Mo. — The biggest and most thrilling piece of entertainment coming to the Fair this year is Flippenout’s Extreme Trampoline Show, performing three shows daily, west of the Agriculture Building.

Flippenout features a team of top athletes from North America including Olympic Medalist, National Champions, National Team Members, Olympic Hopefuls and top tier show professionals who perform extreme trampoline shows to music. These performers will put on a crazy show of twisting triple flips, complex acrobatic routines heights of 25 feet or more, snowboards, skis, ball and cirque-style action off of the only transparent wall in the world used in fast set-up trampoline shows. It’s a show for all ages – don’t miss it!

Coming home to the 2017 Missouri State Fair is a hit from the 2016 Fair. RoboCars, sponsored by AOK RV’s, will be strolling the fairgrounds daily Aug. 10-20. This year, they will be bringing a fire truck and a police car robot.

The RoboCar concept was invented in the fall of 2009 by Drew Beaumier to compete in high prize costume contest. Drew has made several guest appearances on major U.S. television shows and traveled across this country performing in a multitude of venues and events with his creative and original invention. Be on the look out for these incredible performers all across the fairgrounds this August!

More information on the great free entertainment offered at the 2017 Missouri State Fair can be found on the Fair’s website.

Dig into food and farming

Wasps sent to save ash trees