Subscribe
Home / National / Freaked by cicada swarms? You could just stick a fork in ’em 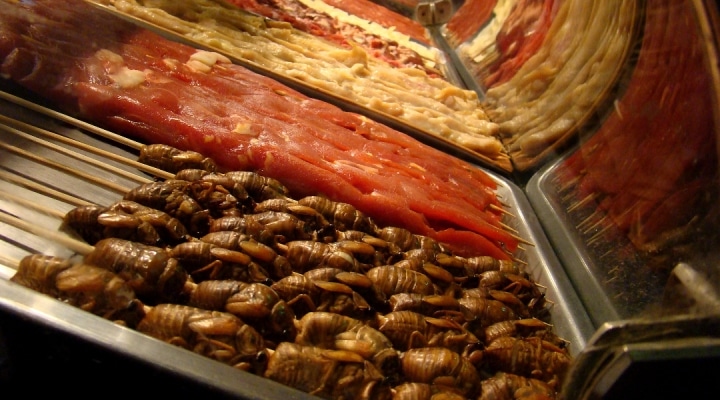 Full of protein, gluten-free, low-fat and low-carb, cicadas were used as a food source by Native Americans and are still eaten by humans in many countries. (istolethetv, Flickr/Creative Commons)

Swarms of the red-eyed bugs, who are reemerging after 17 years below ground, offer a chance for home cooks to turn the tables and make them into snacks.

Full of protein, gluten-free, low-fat and low-carb, cicadas were used as a food source by Native Americans and are still eaten by humans in many countries. 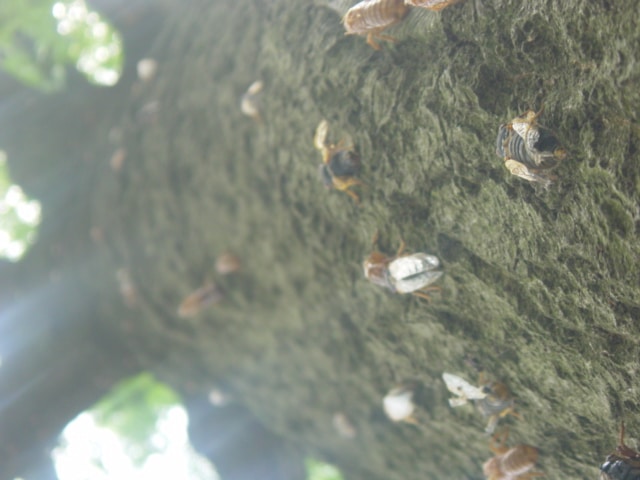 “We really have to get over our dislike of insects, which is really strong and deep-seated in most people in our culture,” said David George Gordon, author of “Eat-a-Bug Cookbook” and known as the Bug Chef.

“You could make stir fry. You can mix them into dough to make bread — make banana bread, let’s say. You can batter them and deep fry them, which I think would be my favorite way,” he said.

This year’s group is called Brood X, and they can be seen in 15 Eastern states from Indiana to Georgia to New York. Their cacophonous mating song can drown out the noise of passing jets.

When the soil warms up enough, cicadas emerge from the ground, where they’ve been sucking moisture from tree roots for the past 13 or 17 years, depending on species. They shed their exoskeletons, attach themselves to branches, mate and lay eggs before dying off in about six weeks.

When eating adult cicadas, it’s advised to pull the wings and legs off to reduce the crunchiness. But Gordon advises home cooks to gather the cicadas when they’re nymphs, before their body armor hardens and while they are still soft and chewy, like soft shell crab.

He puts them in the freezer, a humane way to kill them. Once defrosted, cicadas can become a pizza topping like sundried tomatoes, or replace shrimp in any recipe. Others have followed his lead, including a University of Maryland cookbook dedicated to the cicada.

“People can’t really deal with the idea of looking at a bug and eating it. So that’s why I like tempura batter or something that just conceals the features of the nymph,” Gordon said. “Plus, I’ll eat anything that’s deep fried. I have a recipe in my book for a deep-fried tarantula spider and they’re really good.”

Gordon describes the taste of cicadas as akin to asparagus. University of Maryland entomologist Mike Raupp goes further: “They have a buttery texture, a delicious, nutty flavor, probably from the tannins, from the roots of the trees on which they fed,” Raupp said. “And they’re going to be really good with a Merlot.”

Gordon’s “Eat-a-Bug Cookbook” came out in 1998 and was greeted by hostility and jokes from late-night TV hosts. “But of course, over the last 20 years, this is moving in the direction of being normalized,” he said.

Gordon pointed to the rise of foodie culture and thrill-seeking eaters like chef Andrew Zimmern, but especially to a 2013 report from the United Nation’s Food and Agriculture Organization as a turning point in interest in edible insects. The report estimated that insect-eating is practiced regularly by at least 2 billion people around the world, and that dozens of species have been documented as edible, including cicadas.

It also declared that edible insects are rich in protein and good fats, high in calcium, iron and zinc, emit fewer greenhouse gases than most livestock, and take very little farming space or water.

“Now people were taking what I had been saying all along more seriously,” Gordon said. In America, “We’re kind of the weirdos: 80% of the world’s cultures eat insects, but we’re in that 20% that thinks it’s an abomination.”

The number of mass-produced foods containing insects — from protein bars to chips and pasta sauce — has been rising. In parts of Asia, some insects are sold in bags like salted peanuts or in tubes like stacked potato chips. A German company makes burgers out of mealworms.

“They’re a much healthier option for the planet,” said Dr. Jenna Jadin, an evolutionary biologist and ecologist who has worked as a climate change adviser for UN agencies like the Food and Agriculture Organization. “Especially in light of the fact that we will shortly have to feed 9 billion people.”

Jadin notes with a laugh that once the mighty, high-cost lobster was deemed so repulsive in the West that it was fed to prisoners. “Perceptions change,” she said.

She notes that the Food and Agriculture Organization estimates about 18% of the world’s greenhouse gas emissions are due to animal agriculture.

Adventurous eaters might start with insects at the Newport Jerky Company, which has stores in Massachusetts and Rhode Island and a vibrant online presence. Its insect section includes a bag of grasshoppers for $9.99 or chocolate-covered crickets for $6.99.

Co-owner Derek Medico said he sells one item — a $9.99 mixed bag of dehydrated grasshoppers, mole crickets, silkworms, crickets and sago worms — thousands of times a year. “I think a lot of it just the novelty,” he said.

And he doesn’t expect to see consistent demand for insects anytime soon.

“In other countries and other cultures, that’s much more accepted and much more normal,” he said. “But here, I just think it’s just going to take a while.”

Mark Kennedy is at http://twitter.com/KennedyTwits