Home / National / Fraud in organic grain imports uncovered
A new user experience is coming! We'll be asking you to login to your Morning Ag Clips account March 1st to access these new features.
We can't wait to share them with you! Read more here. 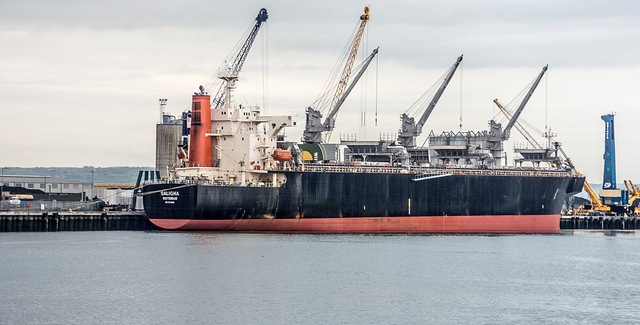 Whisperings of widespread fraud with grain imports have been circulating for over a decade in the organic farming community. (William Murphy, Flickr/Creative Commons)

CORNUCOPIA, Wis. — Non-organic corn and soy, labeled as organic, are flooding U.S. ports, undercutting legitimate U.S. organic farmers, due to the USDA’s negligence. The organic industry’s most aggressive industry watchdog, The Cornucopia Institute, reinforced their call for USDA Secretary Sonny Perdue to correct the chronic pattern of gross corruption at the National Organic Program (NOP) by replacing the incompetent management.

Cornucopia’s letter to Perdue follows the release of a new investigation byThe Washington Post documenting massive shipments of fraudulent organic grains entering the U.S. from China and Eastern Europe. The May 13 article, The labels said ‘organic.’ But these massive imports of corn and soybeans weren’t, details how easy it has been for exporters to sell gross amounts of fraudulent “organic” commodities to U.S. markets.

“This is the second organic major-league scandal uncovered this month by The Washington Post, and it confirms a longstanding pattern of negligence and corruption documented by our researchers,” said Will Fantle, Cornucopia’s codirector.

Cornucopia has filed numerous formal and well-documented legal complaints seeking to force the USDA to examine a wide range of alleged wrongdoings at organic factory farms and by other industry scofflaws. All too often the complaints have been dismissed without investigation, or, when found meritorious, penalties have been negotiated down to a “light slap on the wrist” for offenders, with the details of the deals cloaked in secrecy, according to Cornucopia.

The organic sector is a robust and rapidly growing piece of the food pie, with annual sales now topping more than $40 billion. “Clearly there is a hunger by many in America for food that is safer and more nutrient-dense,” Fantle noted. “But consumers are being cheated and ethical farmers are being robbed of income while the USDA fails to vigorously defend—as they were charged to do by Congress—organic integrity.”

The NOP oversees approximately 150 independent agencies worldwide that do inspections of organic farms and facilities. “Its accreditation program is fundamental in ameliorating the inherent conflict of interest in businesses hiring their own certifiers,” stated Anne Ross, an attorney with Cornucopia with a background in food and agricultural law.

Cornucopia has updated an outstanding complaint with the USDA’s Inspector General about corruption at the NOP. The agency has ignored well-documented concerns of improprieties in imports since The Cornucopia Institute first published their report on growing Chinese “organic” soybean sales in the U.S. in 2009.

Whisperings of widespread fraud with grain imports have been circulating for over a decade in the organic farming community. A number of Cornucopia’s farmer members, and leading farmer-owned organic grain cooperatives, have shared data about domestic markets completely undermined by imports sold at extraordinarily low prices that they simply cannot compete with. For over a decade Cornucopia has informed NOP officials of these concerns. Instead of taking action, the NOP sat back and watched domestic markets erode to the point where organic grain farmers could no longer make a living.

Bob Joos, 57, a fourth-generation North Dakota farmer, who has just finished his conversion to organics, is caught in the squeeze, “Three years of financial sacrifice and hard work later I have achieved organic certification and I am now feeling financial stress because I have bins full of organic grains that the end users don’t want because they are now getting production cheaper than my cost of production, from overseas.”

“If I don’t get a break soon, I am contemplating selling some grain as conventional to try to stay in business one more year. The only other thing I can do is sell off machinery or land,” Joos added.

Why did hunter-gatherers begin farming?