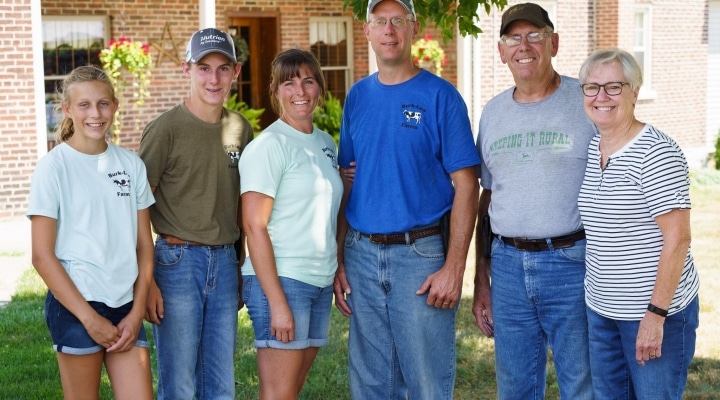 In the Center for Dairy Excellence’s latest episode of the “Cow-Side Conversations” podcast, Clint Burkholder, a dairy producer from Burk-Lea Farms in Franklin County, Pennsylvania, shared his strategies for mitigating heat stress within his dairy herd and ways he is ensuring proper ventilation and cooling measures during the hot summer months. Throughout the podcast episode, Clint also offered his perspective on the return on investment for genomic testing and how to maximize forage quality. (photo by Center for Dairy Excellence)

HARRISBURG, Pa. — In the Center for Dairy Excellence’s latest episode of the “Cow-Side Conversations” podcast, Clint Burkholder, a dairy producer from Burk-Lea Farms in Franklin County, Pennsylvania, shared his strategies for mitigating heat stress within his dairy herd and ways he is ensuring proper ventilation and cooling measures during the hot summer months. Throughout the podcast episode, Clint also offered his perspective on the return on investment for genomic testing and how to maximize forage quality.

Clint opened the podcast by sharing the history of his family’s third-generation dairy farm. Clint’s grandfather started the dairy operation with about 50 cows and began a partnership with Clint’s father in the 1970s. Clint and his wife eventually joined the business in a joint venture, and in 2020, they became the sole owners and operators of Burk-Lea Farms. Today, they have 850 mature dairy cows, approximately 650 replacement heifers, and 12 full-time employees. They crop 1,400 acres to supply the forage, corn and grain needs for their animals.

“I’m the owner but I enjoy working alongside everyone else here. I don’t like to have anyone do something I wouldn’t do myself,” Clint shared in the podcast. “When we hire someone, I try to find out what they excel in and put them in an area of the farm that best uses their skills. We do like to have everyone cross-trained so they can work in different areas of the farm, but with our size, we are able to suit what everyone can do best.”

Throughout the podcast interview, Clint discussed the strategies he has implemented to mitigate heat stress within his herd. He has conventional sprinklers and fans throughout the milking herd as well as natural ventilation in their barns with curtains. They are in the process of installing “smart soaker” sprinklers in the pre-fresh and dry cow areas. The goal of the new sprinkler system is to make the process of cooling his cows more efficient.

“When you compare them to a conventional system where you have sprinklers that run based off heat, temperature and humidity on certain intervals, these smart sprinklers do the same things. But, they also have a sensor that identifies if there’s a cow standing at the feed bunk where the sprinklers are at. If there are no cows there, it won’t run and won’t waste the water,” he explained. “That’s a huge savings in water alone that we are not wasting. It also affects our manure storage. It’s less water we have to deal with and handle.”

During the summer months, Clint and his team also put a cooling pack in the feed as a concentrate. The ultimate goal is to keep the cows’ body temperatures down so they are comfortable and their milk production remains consistent. Clint says these heat abatement strategies have made noticeable impacts on potential drops in production.

“As far as how it impacts production and feed intakes, over the years, it would not be uncommon for us to see a 10-pound drop in production. When you get one of those summer heat waves come through, we would notice cows dropping off and it would take several weeks to get them back to where they were before,” Clint shared about heat stress. “I’m not saying they don’t ever drop [with our approach to heat abatement now], but it’s more steady. You might see a one- or two-pound drop in production but they’re a whole lot more consistent.”

In addition to his focus areas for forage production, Clint described his approach to maximizing alfalfa haylage, which can help save on protein costs when grain prices are high. They keep alfalfa in the ration to boost protein levels, with their forage mix being 30 percent haylage or alfalfa and 70 percent corn silage.

“We like alfalfa in the ration because it goes back to the protein. We’ve grown small grain silage and struggled getting the protein level in that. We’re [excited] if we can get 18% in the small grain silage, but with our haylage, we are typically getting 22-24% protein. It just makes it hard to use the small grain silage if we’re giving up protein,” Clint shared. “I think the reason we have the higher protein in our alfalfa is due to an aggressive cutting schedule. I stick to every 28 days on the alfalfa, and if we have a week or two of hot weather during that particular cutting, we may go as short as 23 or 24 days. I don’t want it to flower, turn purple, and lose protein.”

When it comes to packing and storing the silage, Clint has experimented with a new approach that uses a mesh secure cover instead of tires to help seal and protect their feed. He uses a green mesh cover on top of the plastic, and then places three-feet stone bags around the perimeter of the trench and the seams of the mesh. He also implements an additional oxygen barrier on most of their feed.

“It’s a lot cleaner and a lot easier. It’s not to say it’s not hard work, but everybody that helps would rather do [the mesh cover] over throwing tires,” Clint explained.

Clint concluded the podcast by describing their approach to genomic testing. They begin genomic testing a year ago on their seven-month-old heifers and four-week-old calves. Now, they consistently perform genomic tests on the calves that are four weeks or older every month. According to Clint, the return on investment has been promising for their operation.

To listen to the full podcast interview, visit www.centerfordairyexcellence.org/podcast. The podcast is also available on Spotify, Apple Podcasts, and Amazon Music. With a new episode released each month, Clint’s interview is the ninth episode in the second season. The podcast was designed to share real-time farmer insight, tricks of the trade, and inspiring stories from dairies across Pennsylvania.

Land-use webinar to focus on dealing with difficult issues
August 14, 2022