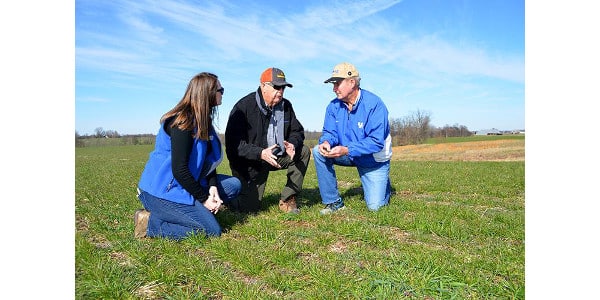 CLINTON, Ky. — Hickman County grain producer Jerry Peery has grown annual ryegrass as a cover crop to control erosion on his Purchase Area farm since 2012, but evidence suggests that he has been getting more out of the cover crop than just erosion control. Peery’s Springhill Farms is the feature of the University of Kentucky Fragipan Field Day that will occur March 26.

The fragipan is a cement-like layer in the soil that creates shallow soils with limited yield potential due to low water-holding capacity. Soil fragipans are in 50 million acres across the nation, including 2.7 million in Kentucky. Kentucky soil fragipans are in some of the largest crop production areas of the state. A UK research team led by soil scientist Lloyd Murdock discovered that annual ryegrass could break down the fragipan.

“The Purchase Area probably has the greatest opportunity to benefit from this technology of any area in the state,” said Murdock, professor emeritus in the UK College of Agriculture, Food and Environment. “Almost all of the soil types in this area have a fragipan.”

The soils on Peery’s farm are from the Loring soil series, which should contain a fragipan layer at 28 inches to 32 inches into the soil profile, but this is not what Murdock found on Peery’s farm.

“In most samples that Jerry and I took on fields where he had been growing ryegrass as a cover crop for several years, there was not a fragipan layer until we got 40 inches deep into the profile,” Murdock said. “This gives us good assurance that this practice has probably broken down the top of the fragipan and made the soil deeper and more productive.”

Peery planted annual ryegrass in a rotation following soybeans and before corn. He has seen a measurable yield increase in his corn crop each year.

“We are seeing on average between five and eight bushels per acre increase in corn each year,” he said.

Annual ryegrass is not without its faults. In fact, many wheat producers are concerned about growing it due its potential for glyphosate resistance.

During the field day, Murdock, Peery and his grandson Jonathan Reynolds hope to show producers how they can successfully incorporate annual ryegrass into their cropping system.

“Producers must practice intentional management when it comes to killing ryegrass,” Reynolds said. “You have to spray it according to product directions and pay attention to the temperatures. We also only plant ryegrass from Oregon that does not have glyphosate resistance.”

“We have more people who use cover crops than not but some may not be the best at managing them,” said Mitchell, who works for the UK Cooperative Extension Service. “If producers do not correctly manage annual ryegrass, then it’s not going to work. Through this field day, they can learn how they can successfully manage the cover crop and see improvements to their operation.”

Additional information is available by contacting Murdock at lmurdock@uky.edu; Mitchell at mrlo234@uky.edu; or Dottie Call at dcall@uky.edu.