Home / National / Four executives indicted for chicken price fixing
A new user experience is coming! We'll be asking you to login to your Morning Ag Clips account March 1st to access these new features.
We can't wait to share them with you! Read more here. 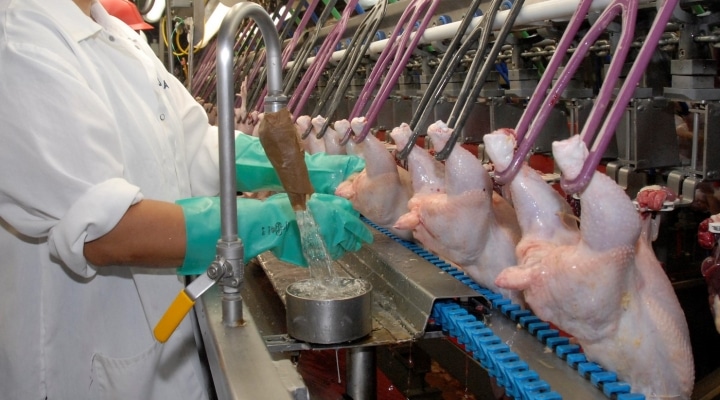 Wednesday's charges were the first in a long-running investigation into price-fixing in the chicken industry. Broiler chickens are chickens raised for human consumption and sold to grocery stores and restaurants. (U.S. Department of Agriculture, Public Domain)

WHEAT RIDGE, Colo. (AP) — The CEO of Pilgrim’s Pride is one of four current and former chicken company executives indicted Wednesday on charges of price-fixing.

The U.S. Department of Justice said a federal grand jury in Colorado found that executives from Greeley, Colorado-based Pilgrim’s Pride and Claxton, Georgia-based Claxton Poultry Farms conspired to fix prices and rig bids for broiler chickens from at least 2012 to 2017.

All four men are scheduled to appear before a magistrate judge in Denver federal court Thursday afternoon, according to court documents. The Associated Press left phone and email messages seeking comment with Pilgrim’s Pride. A spokesman for Claxton Poultry said the company had no comment.

The charges come amid questions about the high price of meat during the coronavirus pandemic.

Last month, attorneys general for 11 Midwestern states urged the Justice Department to investigate potential price fixing by meatpackers. And in an April tweet, Agriculture Secretary Sonny Perdue confirmed that the Department of Agriculture was investigating why ranchers are getting low prices for cattle while U.S. consumers are paying record prices for beef.

Wednesday’s charges were the first in a long-running investigation into price-fixing in the chicken industry. Broiler chickens are chickens raised for human consumption and sold to grocery stores and restaurants.

According to prosecutors, the men communicated about their prices and negotiated to fix, stabilize and raise prices. The indictment cites a number of alleged phone calls and text exchanges between them.

In one text exchange, Brady allegedly told Fries on Nov. 13, 2012 that he had talked to Austin and found out that Pilgrim’s Pride was 3 cents higher on an eight-piece bone-in broiler chicken. Brady said Austin wanted Claxton to raise its prices.

“Tell him we are trying!” Fries responded, according to the indictment.

In November 2014, Penn allegedly sent a series of emails about a competitor who was selling its chickens for less and asked to buy birds from Pilgrim’s to cover a shortfall in a grocery contract. Penn allegedly said the company should have to pay for not being able to provide the promised number of chickens.

“It costs money for them to fill orders for which they don’t have the chickens. They have been adding market share and still trying to do — selling cheap chicken and being short. Doesn’t make sense. We are enabling the town drunk by giving him beer for Thanksgiving instead of walking him into an AA meeting,” Penn wrote, according to the indictment.

Pilgrim’s Pride is a division of JBS USA, the U.S. subsidiary of Brazilian meat production giant JBS SA. Pilgrim’s Pride has more than 54,000 employees and 36 production facilities in the U.S. and abroad. The company says it processes one of every five chickens in the U.S. Claxton Poultry has 2,000 employees and supplies 300 million pounds of chicken per year to customers include Chick-fil-A.

That suit, filed by New York-based Maplevale Farms, said companies shared information through a third-party data firm and restricted supply by destroying breeder hens on several occasions. It’s one of nearly 40 lawsuits filed by grocers, restaurants and others alleging price fixing. Kroger, Walmart and Darden Restaurants — which owns Olive Garden — are among those who have sued.

The executives could each face 10 years in prison and a $1 million fine.

The roots of a staple crop