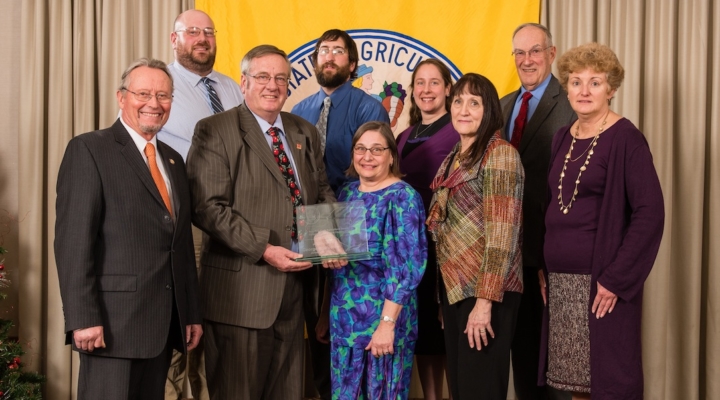 SYRACUSE, N.Y. — Each January, leaders of the agricultural and food industry in NYS gather in Syracuse to discuss emerging issues and recognize peers for outstanding achievement. The historic NYS Agricultural Society Annual Meeting & Forum draws over 500 individuals representing producers, suppliers, regulators, educators and promoters, and is arguably one of the oldest such organizations in the United States. As a bomb cyclone weather system hit the Northeast, Forum attendees deliberated on the record boom of new agricultural technology being introduced and the balance between good, better and best return on investment that can be interpreted vastly differently across the food chain. For producers, harnessing technology to develop real-time, sustainable management solutions is a critical factor as the amount of data being collected in the field is exploding. Market changing solutions are on the horizon for many traditional crops from potatoes to grapes. Speakers Gregg Halverson, Black Gold Farms, and Dr. Nick Dokoozlian, E&J Gallo Winery, set the table for discussion.

Gregg Halverson is President and Chairman of the Board of Black Gold Farms, headquartered in Grand Forks, ND. This fourth-generation family business is renown as a leader in potato production, handling and service. Growing over 25,000 acres of potatoes with locations in 12 states, the Black Gold team is currently the largest producer and handler of fresh potatoes for the potato chip supply chain in the world. Dr. Nick Dokoozlian is Vice President, Viticulture, Chemistry and Enology at E&J Gallo Winery in Modesto, CA. He has been working with IBM to develop a new irrigation system to customize water delivery according to specific vine needs. Utilizing IBM’s Watson Super Computer, the project’s goal is to deliver data that farmers across the globe can utilize.

NYS Commissioner Richard Ball of the NYS Department of Agriculture and Markets presented his annual “State of the State” agricultural address at the conclusion of the 186th annual Forum. “We are continuously looking for new ways to promote our industry, become more sustainable, and improve the long-term viability of our farms,” said Ball. “We’ve made progress in all of these areas and in 2018, we will keep the momentum going because of great partnerships with so many of you. There is power when we work together. Whether you grow vegetables, like me, or you milk cows, or raise cattle, our goals are the same and our purpose is profound. What we do, the obstacles we face and overcome, the product of our fortitude, has the power to change lives. We are the true one-percent.”

2018 Century & Bicentennial Farm Awards—Recognizing Western NY farms in 2018 that are in continuous operation for 100 years or more by the same family on the same land.

Century Farm—Johnson Estate Farm & Winery, Westfield, NY. Operated by Frederick and Jennifer Johnson, the operation is credited as being one of the oldest estate wineries in NYS, producing 38 different wines annually from 13 varieties of grapes.

SUNY Cobleskill—Although not a family operation, the NYS Ag Society recognized SUNY Cobleskill for their century old farm operation, which has grown to 500 acres and 500 livestock. The campus farm has played an integral role to the applied agricultural education program at the university.

Businesses of the Year—Awarded to both a producer and an agribusiness, recognizing quality, leadership and innovation.

Producer—Critz Farms, Cazenovia, NY. Established in 1985, Matthew and Juanita Critz have grown their business to encompass production of pumpkins, apples, conifer trees, hard cider, and craft beer. Critz Farms has previously been recognized as a winner of the NYS Agritourism Business of the Year Award from the NYS Department of Economic Development.

Next Generation Farmer Award—Recognizing a long time producer and those new to the industry who are farming in new and vibrant ways.

Kast Farms, Albion, NY. A Century Farm, Brett and John Kast represent the fifth family generation to operate this diversified fruit, vegetable and grain operation in Orleans County. Using new precision technology, partnering with Cornell University and others, and trying their hand at experimental crops like industrial hemp has enabled the brothers to uniquely challenge the status quo to help grow farm profitability.

Distinguished Service Citation—Recognizing an individual who has dedicated a lifetime of service, resulting in outstanding contributions to NY agriculture.

Jim Bittner—A Niagara County fruit grower—Bittner-Singer Orchards—Jim has led many influential NY agricultural organizations to improve agricultural research, advocacy and education efforts locally, statewide and nationally. Most recently, Jim is the retiring chair of the NY Farm Viability Institute. “It is rare to find a more dedicated and level-headed leader,” said Richard Ball, Commissioner of the NYS Department of Agriculture and Markets. “He is a good servant to the NY ag industry.”

Farm Safety Awards—The NYS Agricultural Society’s Farm Safety program recognizes farm operators who have unique and successful farm safety programs for their employees. In 2018, the Society also honored John G. Pollock as the 2018 Agricultural Health and Safety Supporter of the Year. Dating back several decades, Pollock travelled the state to promote a strong rural and farm health and safety message as executive secretary of the NYS Rural Health and Safety Council and faculty member of the Cornell University Department of Agricultural Engineering.

E-Z Acres, LLC, Mike and Peter McMahon, Homer, NY. Brothers Mike and Peter have made safety a major priority at their Homer dairy where staff and employees keep a strict eye on 12 categories of possible safety issues.

NYS FFA Chapter of the Year—Founded nationally in 1925, FFA makes a positive difference in the lives of high school students by developing their potential for leadership, personal growth and career success through agricultural education. The NYS Agricultural Society recognizes a NY chapter annually that exemplifies excellence in all categories.

Pioneer Central School FFA, Yorkshire, NY. With approximately 100 active members, Pioneer FFA is active in local, state and national events and received the National Superior Chapter Award at the 90th annual National FFA Convention in Indianapolis, IN in 2017. Pioneer is one of the largest geographical school districts in NYS covering approximately 250 square miles in parts of Erie, Wyoming, Cattaraugus and Allegany counties.

Ag Promotion Awards—Recognizes individuals and groups for their efforts to improve the understanding of agriculture in NYS.

Dryden Dairy Day, Dryden, NY. For 34 years, Dryden Dairy Day—conducted in Tompkins County—has educated the public about the dairy industry through displays, coloring contests, parades, scholarships, and interaction with dairy producers. Originated has a single day celebration, the program has evolved into a month-long series of educational activities conducted each June. 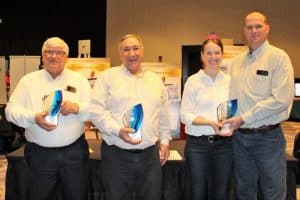