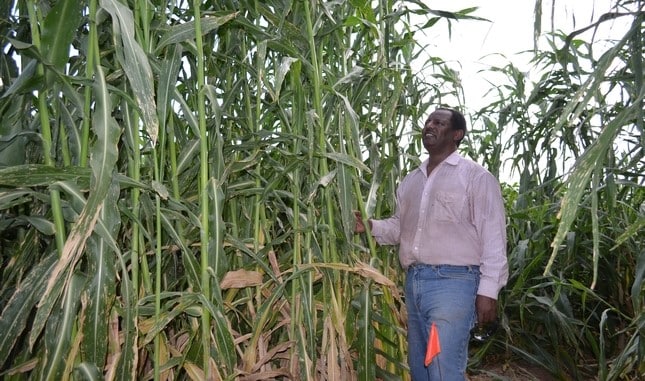 IMPERIAL CO., Calif. — While herding goats along dusty roads as a boy growing up in Oromia, Ethiopia, Oli Bachie began striving to improve his economic position in life. His path to a better life passed through the Philippines and Canada before reaching the United States. Now, carrying the mantle of Ph.D., the UC Cooperative Extension farm advisor is doing research to help California farmers take advantage of new opportunities for economic growth.

More than 400 different crops and animals are commercially produced in California. The wide array of agricultural products keep California farmers competitive in the global market. UC Cooperative Extension research into new crops provides growers with information that can lower the risk of trying something new.

Rhodes grass, giant king grass, quinoa and teff are among the crops Bachie has been studying since he joined UC Agriculture and Natural Resources in 2012.

“Giant king grass and Rhodes grass were brought to my attention by companies who wanted me to test their adaptability, biomass yield and nutrition as livestock feed,” Bachie said. “My findings proved that they indeed adapt and produce high biomass and were nutritionally competent or better than many of the low desert grown grass forage crops.”

Two companies provided Bachie with funding to conduct the research.  “We do research for industries, companies and growers as long as they provide funding and if we believe that the outcome of the research benefits our clientele and the local economy,” he explained.

Viaspace, a company that grows giant king grass in 11 locations in eight countries on four continents, has relied on Bachie’s research for establishing its plantings in the Imperial Valley.

“Oli’s research helped us establish basic growing procedures and parameters for Imperial County. It provided the critical information that gave us the confidence to start a larger commercial effort in the desert,” said Haris Basit, vice chairman of Viaspace.

To share information with Imperial Valley growers, Bachie has presented his research results on Rhodes grass varieties at field days and workshops and published in the UCCE Imperial AgBrief newsletter and in the proceedings of the 2019 Western Alfalfa and Forage Crops Symposium. During the COVID-19 pandemic, he has been giving talks via Zoom on Rhodes grass as a new emerging crop, including a zoom workshop organized by the University of Arizona.

Giant king grass – a hybrid of elephantgrass and Napier grass, which both grow well as wild plants in Ethiopia – and Rhodes grass are widely grown in Ethiopia. But Bachie didn’t study these grasses until he joined UC Cooperative Extension.

Bachie grew up farming with his parents in the rural western part of Oromia, where most coffee and food crops are produced in Ethiopia. “By the way, the name ‘coffee’ is derived from a place in Oromia called Kaffaa,” he noted.

“After school in winter, when most farming takes place, I engaged myself in farming,” Bachie said. That afterschool activity piqued his interest in farming and fueled his pursuit of a bachelor’s degree in plant sciences from Haromaya University in Ethiopia.

“At that time, when I joined the university, there was only one university in the country,” he said. “I was lucky enough to be one of the few to get university admissions among thousands of high school students.”

In Ethiopia, he worked on a program sponsored by the Ministry of Agriculture and United Nations Food and Agriculture Organization for six years, mostly as a crop protection expert. He studied insects, weeds, pathogens and other crop pests on field crops, vegetables and horticultural crops.

Bachie was selected as an FAO fellow to pursue a master’s degree in agronomy at the University of the Philippines.

“My area of particular concern then was to look at allelopathy (a chemical inhibition of plant extracts or exudates) as a potential inhibition of weed growth,” Bachie said. His plans to develop a biological weed management approach were disrupted when he graduated with a master’s degree and he refused to return to his dictator-led home country.

“Ethiopia was then and is still ruled under a brutal government where educated personnel have little value,” he explained. After graduation, he sought settlement in another country. “That supportive state, which I thank dearly, was Canada.”

After earning a master’s degree in forestry from the University of Toronto, Bachie accepted a job at a university teaching network administration and came to the U.S., where he earned a Ph.D. in biological sciences at UC Riverside, “Americanizing not only myself, but also my credential and now I serve UC with full interest and strength,” said Bachie, who holds dual U.S. and Canadian citizenship.

In the spring of 2019, Bachie started comparing grass forage crops (bermudagrass, kleingrass, Rhodes grass and teff) with moringa for livestock feed under low desert conditions. Growers will be able to use the research results to decide which crops will be most profitable for their own operations.

Last summer, Bachie completed a variety trial of quinoa, a grain grown primarily for its edible seeds. He tested the adaptability and grain yield of 35 varieties of quinoa in the heat and biotic stress of the Imperial Valley.

“Of the tested varieties, many tolerated the high heat of the desert and gave promising yields,” said Bachie, who showed the varieties to farmers at an agronomy and irrigation crops field day. “The high grain prices of quinoa in the U.S. and the proof of adaptability and yielding capacity under the low desert condition is expected to attract some growers to grow some quinoa varieties in the Imperial Valley.”

Bachie recently completed a survey of weeds in the county and is planning to publish a handbook titled “Weeds of Imperial County and Management Approaches.”

“While my journey is a huge zigzag and I came up through difficulties, I am very glad that I was able to travel and survive and made myself from a goat herder to an American Ph.D.,” said Bachie, who has also taught biology and environmental science courses part time at Victor Valley and Imperial Valley community colleges, respectively.

“My travel all over the world has enhanced my concepts of human diversity and the affinity to associate and work with people of various backgrounds. To be sure, I call myself a person of the globe.”