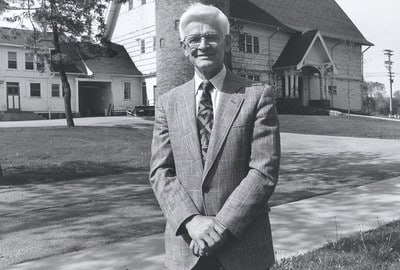 “As a graduate student, you want to work on something that might make a difference. In Neal’s dairy cattle nutrition research lab, you always felt that what you were working on had relevance and was highly important to the state’s dairy industry,” says Randy Shaver, an emeritus professor of dairy science, who did his graduate training under Jorgensen’s supervision. (UW-Madison CALS/Flickr)

MADISON, Wis. — Neal Jorgensen, an emeritus professor of dairy science who served the University of Wisconsin–Madison College of Agricultural and Life Sciences in numerous leadership positions including dean, passed away on December 22, 2020. He was 85 years old.

Jorgensen grew up on a dairy farm near Luck, Wisconsin. After high school, he spent two years in the army, and then earned a bachelor’s degree in agricultural education at UW­–River Falls. In 1960 he came to UW–Madison, where he earned his master’s and doctorate degrees in dairy science, with a minor in biochemistry. He joined the faculty in the UW–Madison Department of Dairy Science (now the Department of Animal and Dairy Sciences) as a dairy nutritionist in 1968, and went on to serve the college as associate dean, executive associate dean and dean. He retired in 1998.

“Neal was a very hard working, thorough and detail-oriented person, and a planner of the fist magnitude,” says Louis Armentano, emeritus professor of dairy science, who was department chair during part of Jorgensen’s time in CALS administration. “He was also caring and fun, a nice guy to be around. His service ethic was second to none, and he really cared about Wisconsin, CALS, agriculture in general and the dairy industry in particular. We were lucky to have had him [as a leader and faculty member].”

Jorgensen was an outstanding teacher who was well liked and highly respected by Farm and Industry Short Course, undergraduate and graduate students alike. He received numerous teaching awards throughout his career, including a dairy production teaching award from the American Dairy Science Association. Over the years, he trained more than 65 graduate students, many of whom went on to be leaders in academia or the feed and dairy industries.

“As a graduate student, you want to work on something that might make a difference. In Neal’s dairy cattle nutrition research lab, you always felt that what you were working on had relevance and was highly important to the state’s dairy industry,” says Randy Shaver, an emeritus professor of dairy science, who did his graduate training under Jorgensen’s supervision.

Jorgensen’s research studies on forage quality and forage harvesting practices, which involved UW–Madison agronomists and agricultural engineers, resulted in improvements for dairy farmers and laid the groundwork for much of the research still being done today. Other research contributions included work on preservation and utilization of forages, and the extraction of protein from forages. His lab produced hundreds of peer-reviewed publications, and Jorgensen shared his findings with Wisconsin farmers as a frequent speaker at conferences and workshops.

“Neal was very practical, and his research programs for dairy farmers were always closely tied to their needs, and he was well respected for that,” notes Shaver.

Jorgensen also crossed campus to collaborate with biochemist Hector DeLuca to explore the roles of vitamin D and calcium in a metabolic disorder of lactating dairy cows called milk fever, an expensive problem for dairy farmers. The work led to practical feeding and management guidelines that helped farmers reduce the disorder’s occurrence and adverse effects in dairy cows.

“Neal was an outstanding faculty member, administrator, and collaborator. Personally, he was an outstanding friend and colleague,” says DeLuca, emeritus professor and former chair of the biochemistry department, who at the time of Jorgensen’s retirement described working with him as “one of the most fruitful and pleasurable experiences I’ve had.”

In 1984, Jorgensen was named associate dean of CALS and associate director of the CALS Research Division, responsible for day-to-day leadership and coordination of the college’s research programs. In 1992 he became executive associate dean, where he coordinated budget and personnel issues, program development, faculty and staff recruitment and development, and department and program reviews. Jorgensen was set to retire in summer 1997, but instead stepped up to serve as CALS dean after the resignation of Roger Wyse, helping the college navigate a difficult transition period. He retired in early 1998, after Elton “Abe” Aberle was named dean.

Jorgensen was active in dozens of professional organizations and producer groups throughout his career. He served as president of the American Dairy Science Association (ADSA) and sat on the ADSA Foundation board of directors. He was chairman of Farm Progress Days Inc. of Wisconsin and active in several other Wisconsin farm organizations. He also served on the board of the Council for Agricultural Science and Technology and on the National Research Council Board on Agriculture, which advised the U.S. Secretary of Agriculture on research, extension and farm policy.

Jorgensen received many awards throughout his life. In 1997, he was honored by the Farm and Industry Short Course with a Service to Agriculture Award. The following year he was given the college’s Distinguished Service Award. In 2004, Jorgensen received the ADSA Award of Honor for his many contributions to the association. These honors, among others, highlight his exemplary teaching, research and outreach endeavors.

“CALS lost a great friend, scientist and leader with the passing Neal Jorgensen,” says Dick Straub, emeritus professor in the Department of Biological Systems Engineering and former CALS senior associate dean. “Neal was a role model and mentor for many of us who demonstrated the value of collaboration in his research success. He cared deeply about the college and Wisconsin agriculture and stepped up to help lead CALS through some critical periods. Neal will be deeply missed.”