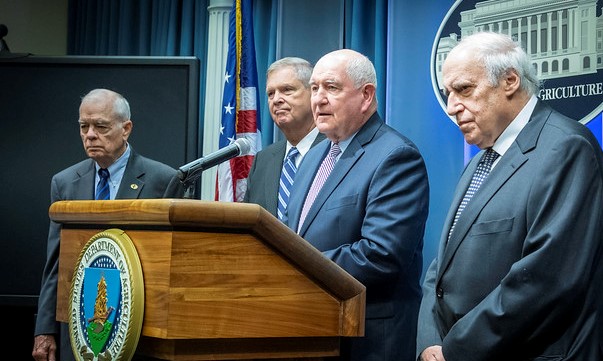 “President Trump has fulfilled a promise, which many said couldn’t be done, to renegotiate NAFTA and improve the standing of the entire American economy, including the agriculture sector,” said Secretary Perdue. “Support for USMCA crosses all political parties, specifically when it comes to the agriculture community, and I am proud to stand side by side with former agriculture secretaries who agree USMCA is good news for American farmers. I commend President Trump and Ambassador Lighthizer, for their perseverance, leadership, and hard work to get USMCA across the finish line.”

Former Secretaries Vilsack, Glickman, and Block joined Secretary Perdue at USDA today for a press conference to reiterate their support for USMCA. You may watch the press conference by visiting the USDA Facebook page.

USMCA will advance United States agricultural interests in two of the most important markets for American farmers, ranchers, and agribusinesses. This high-standard agreement builds upon our existing markets to expand United States food and agricultural exports and support food processing and rural jobs.

All food and agricultural products that have zero tariffs under the North American Free Trade Agreement (NAFTA) will remain at zero tariffs. Since the original NAFTA did not eliminate all tariffs on agricultural trade between the United States and Canada, the USMCA will create new market access opportunities for United States exports to Canada of dairy, poultry, and eggs, and in exchange the United States will provide new access to Canada for some dairy, peanut, and a limited amount of sugar and sugar-containing products.