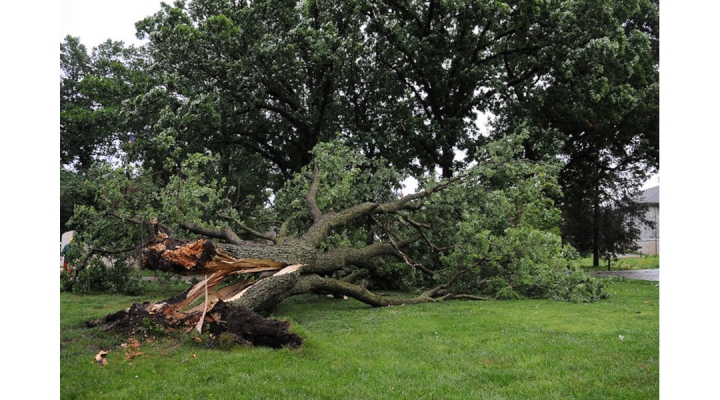 MANHATTAN, Kan. — A smattering of large trees that toppled over – roots and all — during recent high winds in Kansas are more likely an indication of the severity of weather in those areas, as opposed to a failure of the tree’s structure, said an official with the Kansas Forest Service.

But Ryan Rastok also noted that such human-created encroachments as paved roads, retaining walls, houses and other structures can be contributing factors to mature trees coming down.

“A lot of people don’t consider it too much, but the roots of trees don’t really go too deep into the ground; they’re more shallow and expansive,” said Rastok, who is the forest health coordinator with the Kansas Forest Service. “I like to tell people that a tree’s roots are more like the base of the stem of a wine glass, but very wide. Often times in a natural setting, those roots extend far beyond the drip line of the tree.”

Listen to an interview by Samantha Bennett with Ryan Rastok on the weekday radio program, Agriculture Today

In urban areas, however, tree roots are restricted in how far they can travel, making them more susceptible to failure due to severe winds.

“The wider and healthier the root system is, the better it is going to be able to withstand wind forces,” Rastok said. “But often times, the root system is compromised due to some sort of human activity. You will have a higher likelihood of tree failure if that root system is restricted.”

Even so, Rastok notes that trees are sturdy structures. Unless there’s an indication that the tree is more susceptible to failure – signs such as decay in the trunk; failures of limbs or large branches; or heaving at the root plate – homeowners’ property is likely not in immediate danger.

“Trees do fail and they do fall, as a natural part of the system,” Rastok said. “But it’s not something that people should be on high alert about unless they have an indication of impending failure, or a professional has given a competent assessment of those trees.”

When it’s determined that a tree may present a danger, Rastok said mitigation might include pruning, installing support cables, or removing the tree.

“It’s a very complicated process because there are a lot of variables involved,” he said. “It may vary depending on the different species of trees, location of tree, events that might contribute to a tree failing or causing an issue. Determining the level of risk relies on a competent person to come in and evaluate the tree.”

Trees in rural areas may not be as susceptible to human activity, but they can topple over, as well, according to Rastok. High flatland winds and tornadoes will take down trees in less-populated areas, “but it all just kind of depends on the history and site and soil conditions…things like that,” he said.

Rastok added that when rural towns grow into nearby wooded areas, the existing trees retained from wooded areas may be less suited for neighborhoods.

“In a natural setting (such as a forest), trees typically grow straighter; they are in competition with other trees, so they’re not putting out low limbs that you see in urban trees,” he said.

“The issue is that removing surrounding trees increases the likelihood of failure because now the trees are not adapted to wind force situations.”

Even so, Rastok doesn’t think homeowners need to sit around worrying about trees falling onto their house or other property.

“There’s always some level of risk, but you don’t need to be scared about trees around your house unless there’s a reason to be because of a known or identified defect,” he said.

More information on managing trees is available online from the Kansas Forest Service.