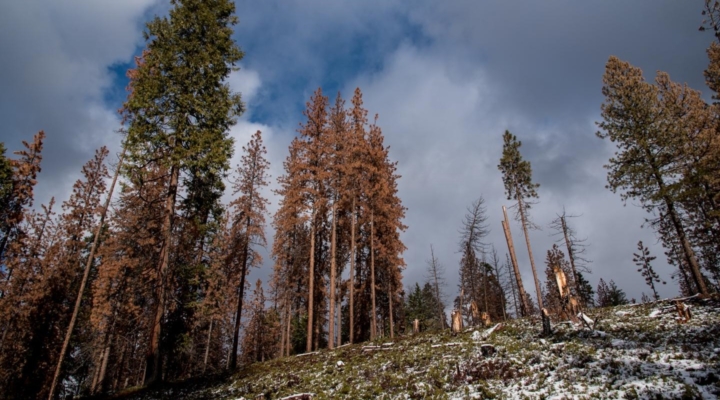 IRVINE, Calif. — A catastrophic forest die-off in California’s Sierra Nevada mountain range in 2015-2016 was caused by the inability of trees to reach diminishing supplies of subsurface water following years of severe drought and abnormally warm temperatures. That’s the conclusion by researchers from the University of California, Irvine and UC Merced outlined in a study published today in Nature Geoscience.

From 2012 to 2015 the entire state of California experienced a crippling drought, and it was especially severe in the southern Sierra Nevada. With a multi-year combination of below-average precipitation and above-average warmth, the resulting drought was considered to be the most extreme in hundreds of years.

Observations by the U.S. Forest Service Aerial Detection Survey showed that many tree stands suffered nearly complete losses of mature conifers. Pines were especially hard hit, due to an infestation of bark beetles. A post-drought survey found that the tree mortality was greatest at lower elevations, with nearly 80 percent loss in 2016 compared to 2010.

Goulden and co-author Roger Bales, director of the Sierra Nevada Research Institute and Distinguished Professor of engineering at UC Merced, used field and remote sensing observations to examine tree communities at a variety of elevations and latitudes in the sprawling mountain range using.

Their study outlines one of the key factors in the die-off – the coincidence of unusually dense vegetation, a prolonged period with well-below average precipitation and warmer than usual temperatures. The heat and density of trees and plants accelerated evapotranspiration (moisture evaporating from leaves), which caused thirsty trees to draw even more water from the ground.

The scientists concluded that there was a four-year period of moisture overdraft, meaning more water was being taken out of the soil than was being replaced by rain or snowfall.

“We expect climate change to further amplify evapotranspiration and ground moisture overdraft during drought,” said Goulden. “This effect could result in a 15 to 20 percent increase in tree death during drought for each additional degree of warming.”

With their improved understanding of the contributions of factors such as elevation, vegetation density, heat, precipitation and soil water amounts, the researchers said they now have a framework to diagnose and predict forest die-offs brought on by drought.

“Using readily available data, we can now predict where in mountain forests multi-year droughts are likely to have the greatest impact, and the threshold that those impacts are expected to occur,” said Bales.

–University of California- Irvine
via EurekAlert!