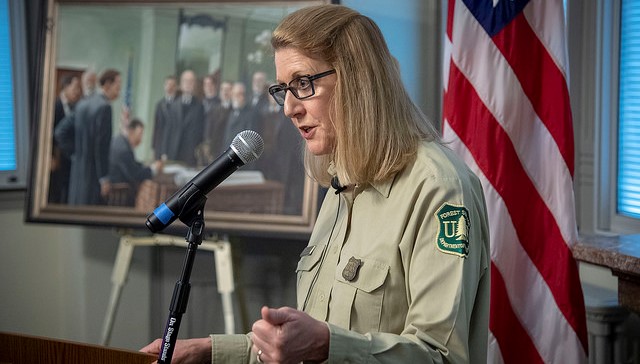 "I know our actions past and present are not enough, we must do more," said Christiansen, who was named interim chief in March and took over the position permanently just a month ago. She was appearing before the House Oversight and Government Reform Committee. (Forest Service, USDA, Public Domain)

WASHINGTON (AP) — Amid scrutiny stemming from fresh revelations of rampant discrimination, bullying, retaliation and sexual misconduct at the U.S. Forest Service, the agency’s new chief pledged Thursday that she will “do everything in my power to put us on a path to no harassment.”

Vicki Christiansen acknowledged to a congressional panel that the Forest Service is in need of a culture change. She pledged to enact new systems and overhaul existing processes to ensure a safe and functional work environment.

“I know our actions past and present are not enough, we must do more,” said Christiansen, who was named interim chief in March and took over the position permanently just a month ago. She was appearing before the House Oversight and Government Reform Committee.

The Forest Service is part of the U.S. Department of Agriculture.

The agency’s struggles date to at least the 1970s, when a class-action lawsuit was filed alleging discrimination against women in hiring and promotions. In December 2016, the oversight panel held a hearing to address reports of systemic discrimination, bullying and harassment within the Forest Service.

The matter has gained renewed attention as female Forest Service employees recently stepped forward with tales of harassment, retaliation and even rape. In March, the USDA Office of Inspector General released a report that showed widespread mistrust in the complaint reporting process, prompting the agency to change the way it handles sexual harassment and misconduct allegations.

“Despite taking some steps to address the problem, “alarming reports of misconduct and retaliation at the USFS persist,” Gowdy wrote.

Prior to becoming Forest Service chief, Christiansen spent more than three decades as a forester and wildland firefighter.

“I know what it means to encounter harassment and discrimination in my workplace,” she said. “I know the deep anguish it causes. I know how it feels to fear retaliation.”

Those experiences, she said, “fuel my commitment to the Forest Service.”

Christiansen on Thursday discussed progress made, and laid out her plans to further reform the agency. She said the agency has updated its anti-harassment policy and hired outside contractors to investigate allegations of sexual harassment. Additionally, Christiansen said the agency has created a Work Environment and Performance Office and plans to establish a victim advocacy and support structure.

Shannon Reed, who said she was harassed and assaulted, then fired after she reported the abuse, shared her story at Thursday’s hearing. She said Christiansen’s plan to reform the agency doesn’t go nearly far enough.

“Chief Christiansen’s action plan is merely a check-the-box process to make the agency appear as if it is addressing sexual harassment, gender harassment, bullying and retaliation,” Reed said. She told the panel that she was forced to attend a listening session with her harassers.

Gowdy asked USDA Inspector General Phyllis K. Fong, who also testified at the hearing, why victims and abusers would ever be in the same session.

“How in the hell can you have the perpetrator in the room with the victim?” Gowdy said. “I can’t think of anything that has a more chilling effect on someone being able to tell their story.”

“I understand your concern,” Fong said. “We want to send a very clear message in our office that if people have concerns or issues they would like to bring forward, we have multiple ways and avenues where we can help people.”

“From the information we do have, it appears that the Forest Service still has much work to do to ensure that the victims of harassment and bullying_particularly those working in remote areas_receive the support they need when they report assault or harassment,” Cummings said. “The Committee must ensure that once investigations are completed, real reforms are made.”

Cummings also said he anticipates “developing long overdue legislation” to strengthen standards for investigating sexual misconduct allegations and “to expand transparency as much as possible while protecting privacy.”

Christiansen admitted there is still “big work to do.”

“I’d like to say I could change it in six months. But to be absolutely honest, I don’t think you change the culture of an organization that’s existed for 113 years and has 40,000 people overnight,” she said.

Prior to working for the Forest Service, Reed worked for the National Park Service, where she said she also experienced bullying, harassment and assault.

“Little did I know that transferring from the Park Service to the Forest Service was jumping from the frying pan to the fire,” she said.

At the same time in a separate hearing room on Capitol Hill, President Donald Trump’s nominee to lead the park service — also under fire for its handling of sexual harassment and assault claims — faced demands from senators to confront what park employees have told lawmakers is rampant abuse at national parks.

“This is really a dark cloud over our National Park Service,” Sen. Lisa Murkowski, an Alaska Republican and chairwoman of the Senate Energy and Natural Resources Committee, told David Vela at a committee hearing on his nomination to lead the agency. Murkowski cited a “long-term pattern of sexual harassment and hostile work environment” at the park service.

Vela, currently park chief at Grand Teton National Park in Wyoming, said he would hold “people and processes accountable” in dealing with widespread allegations of male colleagues and bosses preying upon and bullying female co-workers, including complaints at iconic national parks such as Grand Canyon and Yosemite.

“The scourge of sexual and workplace harassment … at the National Park Service must stop,” Vela told lawmakers.

A Park Service preliminary report in 2016 concluded “the environment is indeed toxic, hostile, repressive and harassing.”